Four Great Landmarks in the History of Neurotechnology

A Loop Towards the Extinction of Species,The Other ‘Butterfly Effect’

How to Always Win at Rock, Paper, Scissors

In 2005, the board of directors of Maspro Denkoh Corporation, a leading Japanese electronics company, decided to sell off the valuable collection of Impressionist paintings that hung on the walls of its head office. They contacted representatives from the two most prestigious auction houses in the world: Sotheby’s and Christie’s. The offers they each submitted were so similar that, unable to make a decision based on rational criteria, the president of the Japanese corporation, Takashi Hashiyama, decided to settle the matter with a game of rock-paper-scissors between representatives of the two firms.

That eccentricity has served as the inspiration for this month’s brain teaser. Imagine a form of rock-paper-scissors played with very special dice: all of them are different from each other and with the six sides labelled with rocks, papers and scissors, in such a way that each player must choose one of the available dice and throw it to make his move. 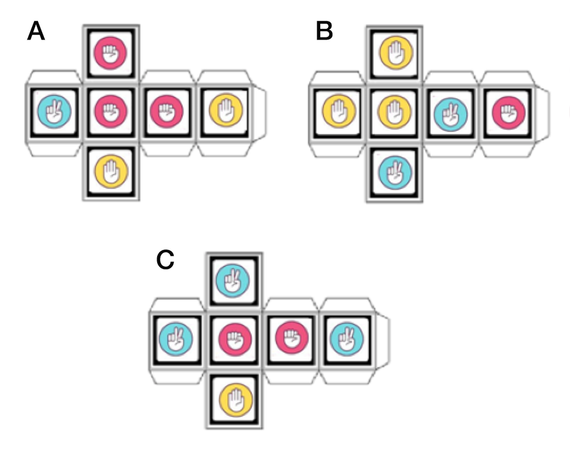 If your opponent chooses to play with die C, which of the other two dice offers you the best chance of winning?

Rock-paper-scissors may seem like a trivial game, but behind its childish concept are hidden surprising logical-mathematical considerations: most importantly, non-transitive relations. These occur in a situation where there are three or more alternatives, among which it is impossible to choose the best or the most advantageous because there are the same number of options to emerge victorious as to be defeated.

Brain teaser 2: Let’s now imagine that we expand the available number of dice to five and, in addition to the three previous dice, we now have:

If your opponent now chooses to play with die A), which of the others gives you the greatest chance of winning?

The game between Sotheby’s and Christie’s

Returning to the story of the auction of Maspro Denkoh, when the respective representatives of Sotheby’s and Christie’s were informed of the surprising decision taken by Mr. Hashiyama —an alternative that, apparently, is not so unusual in Japan to settle similar situations— and that the game would be played at the head office of the corporation three days later, they adopted very different attitudes.

Those in charge of Sotheby’s assumed that it was a game of chance, a matter of luck which they entrusted to the goddess of fortune. On the contrary, the representatives from Christie’s decided to investigate the matter to find out if there was any sort of strategy that might help them to emerge victorious. In particular, the international director of the Department of Impressionism and Modern Art, Nicholas Maclean, drew on the advice of two expert players: his 11-year-old twin girls, who played at school.

The twins felt that the most usual tactic for beginner players was to choose rock first (a conclusion supported by The World Rock Paper Scissors Society that concluded that rock is the most usual choice). They also warned that any player with some experience and/or time to analyse it would think the same and, therefore, would choose to start with paper to surprise their opponent. Thus, the recommendation of the Maclean clan for their colleagues in Japan was to opt for scissors. When the day arrived, the representatives from the rival auction houses were shown to the meeting room at the corporation’s headquarters and had to record their choice on a card. As the twins had predicted, Sotheby’s chose paper, and Christie’s emerged victorious thanks to their choice of scissors.

Brain teaser 3: Now we are going to add 3 different dice to those available to play (making a total of 8): 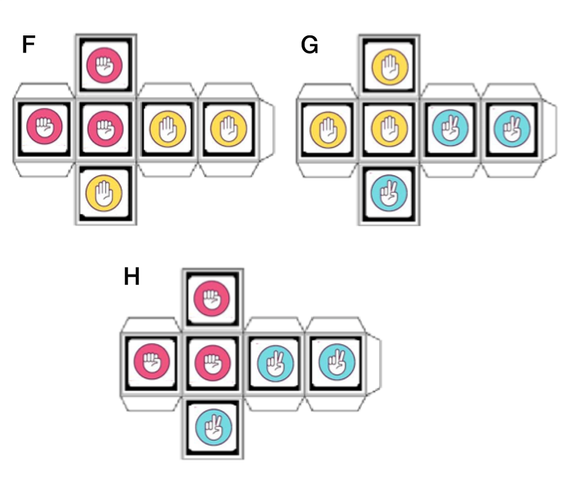 This time your opponent opts to play with die G). Which one should you choose?

How Mobile Apps Have Transformed the Restaurant and Food Delivery Industry