The Extinction of the Dinosaurs

“If you look at the numbers on my face, you will not find thirteen any place.”

“Tear one off and scratch my head; what was once red is black instead.”

“The eight of us go forth, not back, to protect our king from foe’s attack.”

Where have you heard these? The answer is in the movie Batman Forever. They are the three riddles that the character the Riddler poses to the man bat in the film. In reality the person who created them was Will Shortz, a legend in the field of riddles and logic puzzles. To verify this, one need look no further than his résumé: he has been the crossword puzzle editor of The New York Times since 1993, a contributor to the Weekend Edition Sunday show since its premiere in 1987, and is the only person in the world who has a college degree (from the University of Indiana) in enigmatology, that is, the study of puzzles – in addition to appearing in such popular series as The Simpsons and How I Met Your Mother.

Shortz was also the founder and creator of the World Puzzle Championship, whose first edition was held in New York in 1992. The 25th and most recent edition took place in Senec (Slovakia) on 16-23 October 2016.

What kind of puzzles do the participants face? Would I be able to solve them? To answer these and similar questions, the World Puzzle Federation has organized since 2014 a parallel online competition, the Puzzle Grand Prix, which allows anyone who wishes to register to participate from their home and face puzzles similar to those of the official championships and, in many cases, designed by the same authors.

The following three puzzles that appeared in the World Championship and in the 2016 Grand Prix should serve as a challenge:

(The letters only serve to identify the matches) 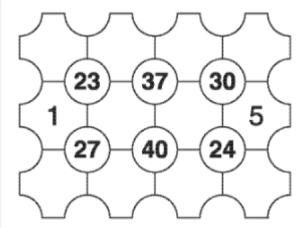 Click the button and you will see the solutions to these three puzzles and to the riddles posed by The Riddler in Batman Forever. 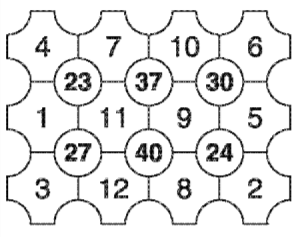 Enrico Fermi, the Architect of the Nuclear Age