Hypatia of Alexandria: Maths against Intolerance

Work in the Age of Data
See more books
Start Do you Know How to Build a Brain in a Jar?
Technology Innovation

Do you Know How to Build a Brain in a Jar?

Neurons cultured/grown under laboratory conditions on an array of non-invasive electrodes provide an attractive alternative with which to realise a new form of robot controller. An experimental control platform, essentially a robot body, can move around in a defined area purely under the control of such a network/brain and the effects of the brain, controlling the body, can be witnessed. Of course this is extremely interesting from a robotics perspective but it also opens up a new approach to the study of the development of the brain itself because of its sensory-motor embodiment. Investigations can in this way be carried out into memory formation and reward/punishment scenarios — the elements that underpin the basic functioning of a brain. 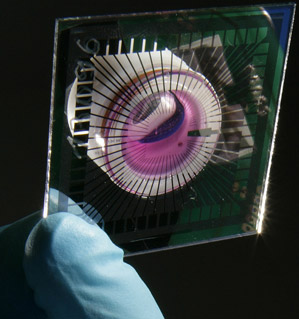 Growing networks of brain cells in vitro (around 100 000 to 150 000 at present) typically commences by separating neurons obtained from foetal rodent cortical tissue. They are then grown (cultured) in a specialised chamber, in which they can be provided with suitable environmental conditions (e.g. appropriate temperature) and nutrients. An array of electrodes embedded in the base of the chamber (a multielectrode array, MEA) acts as a bidirectional electrical interface to/from the culture. This enables electrical signals to be supplied to stimulate the culture and also for recordings to be taken as outputs from the culture. The neurons in such cultures spontaneously connect, communicate and develop within a few weeks, giving useful responses for typically three months at present. To all intents and purposes, it is rather like a brain in a jar!

The neurons in such cultures spontaneously connect, communicate and develop within a few weeks

In fact the brain is grown in a glass specimen chamber lined with a flat ‘8×8’ MEA which can be used for real-time recordings (see Figure 1). In this way, it is possible to separate the firings of small groups of neurons by monitoring the output signals on the electrodes. Thereby a picture of the global activity of the entire network can be formed. It is also possible to electrically stimulate the culture via any of the electrodes to induce neural activity. The MEA therefore forms a bidirectional interface with the cultured neurons (Chiappalone et al. 2007; DeMarse et al. 2001).

Read more about this topic in Kevin Warwic´s article, The Future of Artificial Intelligence and Cybernetics.

I-ambiente
Start Do you Know How to Build a Brain in a Jar?