The impact of our diet on the carbon footprint

Sustainability Notes nº3: The Search for Alternatives to Fossil Fuels
See more books
Start The Darwins; a Bright Family With a Dark Side
Science Leading Figures

The Darwins; a Bright Family With a Dark Side

The good points: generations of scientists with titles of nobility

February 12, 2019 is the 210th anniversary of the birth of Charles Darwin (1809-1886) in a large family of which he is the most famous child, which had many other good points and some that were not so good.

Darwin’s parents, Robert Darwin and Susanah Wedgwood, came from families that had risen up socially thanks to the hard work and intelligence of Darwin’s grandfathers: Erasmus Darwin and Josiah Wedgwood. The former was a well-known doctor who was also interested in theoretical science and carried out experiments. In fact, his experiments on the origin of life were one of the foundations mentioned and included by Mary Shelley in her novel on the attempt by doctor Frankenstein to generate life from dead human bodies. He also published a book on his ideas regarding the evolution of species, which can be considered the prequel of the “Origin of Species”, written by his grandson. Josiah Wedgwood, in turn, applied certain “scientific” ideas to the manufacturing process of ceramics and founded a very profitable company. He also has two things in common with Darwin’s paternal grandfather: his interest in experimental science – both belonged to the Lunar Society where intellectuals and industry pioneers met to discuss matters of science – and in their struggle against slavery. Their friendship surely paved the way for marriage between the families. First, that of Darwin’s parents. Charles Darwin later married Emma Wedgwood, the daughter of an uncle on his mother’s side, which made Darwin and his wife first cousins. One of Darwin’s sisters even married one of his wife’s brothers.

Several figures stand out in Darwin’s parents’ generation, in the second stage of the dynasty. In addition to his father (also a well-known doctor and smart investor of his wife’s money) and his wife’s father (who successfully continued in the ceramics business), Darwin had a half-uncle who was a doctor and voyager, named Sir. In his own family, the third generation, he stood out the most, though one of his cousins, Sir Francis Galton penned works that gave birth to eugenics as a “science”.

In the fourth generation of the Darwin family, of Darwin’ 5 sons that reached adulthood, all except the eldest, who became a banker, stood out in various branches of knowledge (astronomy, mathematics, physiology of plants, engineering, etc.), for which they were admitted into the country’s and perhaps the world’s most relevant scientific institution at the time – the Royal Society and/or gained the title of Sir.

From the fifth to the eighth generation, we find a myriad of grandchildren, nephews, great-nephews, great grandchildren and so on who stood out in several aspects, ranging from military figures and politicians to poets, novelists, film makers, doctors and so on. Among these is the great musician Ralph Vaughan Williams, who was a descendant on his mother’s side of both the Darwins and the Wedgwoods. He composed 9 symphonies and a large number of other works; one of the best known is his “Fantasia on a Theme by Thomas Tallis”, which was used by the Spanish film maker Gonzalo Suárez to set the magical atmosphere of his famous film “Remando al Viento” (Rowing Against the Wind) on the origin of the myth of Frankenstein. On the merits of his great works, this musician was given the honor of being buried in Westminster Abbey, in the company of his illustrious grand-uncle Charles Darwin.

In a word, the Darwin and Wedgewood families especially, but also the Galton, Fox, Huxley, Keynes and Barlow families, among others, are perhaps witness to the statement attributed to Francis Galton that “genius is hereditary, the proof is my family“. Full confirmation of this would require the discovery of “intelligence” genes, if something of the kind were ever discovered, in genetic studies of the family. Meanwhile, we can be sure that a good family “environment”, prosperity, education, social relationships, convenient marriages and so on played a helpful role in achieving this success.

Evidently, the women of the family must have had an important role in this success, contributing with their genes, their good economic standing and their skill in the education of their numerous offspring. This is especially true of the great influence and inspiration exerted over Darwin and his work by his wife, Emma Darwin, and on his lack of religious conviction on the premature death at the age of ten, in 1851, a few years before the publication of The Origin of Species, of their daughter Anne Darwin. In the latest generations, the effect of social progress and the democratization of access to specialized learning that overcame the strict patriarchal standards of previous times can be seen in the numerous descendants of the Darwin family who have stood out and continue to do so in various fields of the sciences and arts. In fact, one of his descendants, Nora Barlow, was precisely the publisher of her grandfather’s (Charles Darwin) autobiography.

The not so good points: eugenics that did not work.

Francis Galton of the Darwin family “gave birth” to a theory known as eugenics, which attempted to “improve” humanity biologically and combat supposed genetic deterioration. At the beginning, this field of science proposed taking positive eugenics measures: for instance, favoring certain marriages which were believed to be “better” from a biological viewpoint, and which was supposedly practiced by the Darwin family. Moreover, the theory of eugenics defended the use of other “negative eugenics” measures, such as not recommending certain marriages, or even proposing sterilization of genetically inferior couples, which in some horrible cases led to their physical elimination. 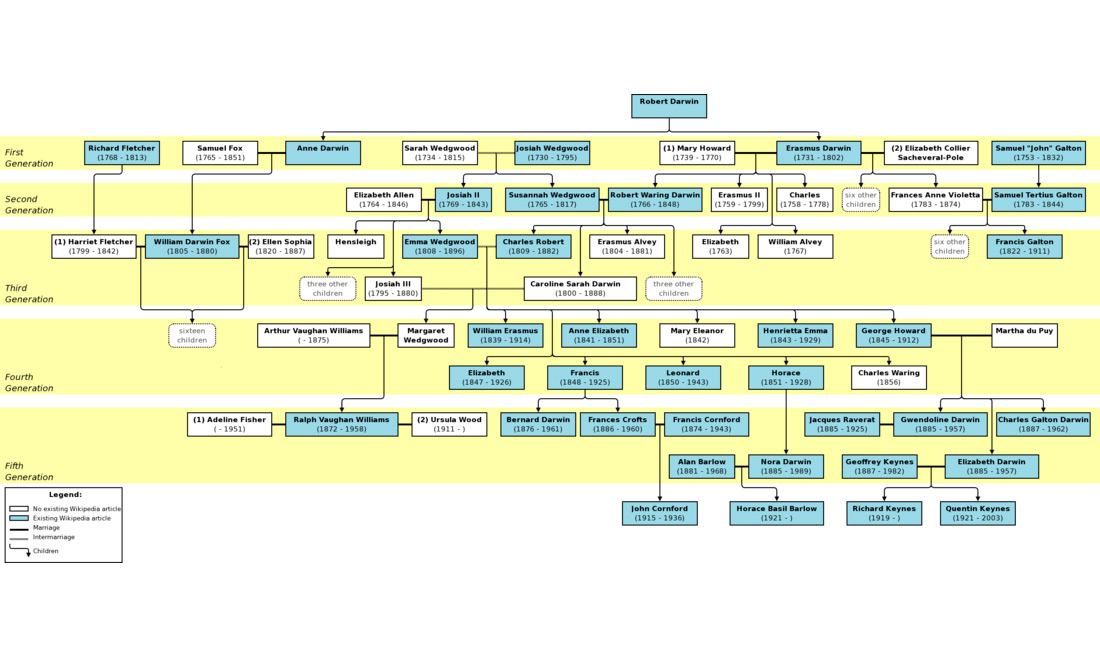 Charles Darwin was always reluctant to support these ideas clearly, although they were “sold” as an extension and application in humanity of his theory on natural selection. However, several of his children supported these ideas and even presided at certain times over the Eugenic Societies that were established to spread them and defend their implementation.

In addition, although the general impression left was that of a thriving family, some branches underwent health problems. This occurred specifically to Charles Darwin and his descendants. He himself was chronically ill and some of his 10 children did not reach adulthood or had a variety of illnesses. Darwin believed that these problems could be related to the kinship of his marriage, an idea that has been proposed on several occasions since then. However, other diseases, such as Chagas or Lyme, which are transmitted by insect bites, caught as a result of his travels through South America, have also been mentioned in this regard.

Several recent studies (1) have demonstrated that, although consanguinity was not very high in the Darwin family, it may have had consequences on the mortality, diseases and especially the fertility of his children and descendants. As regards the illnesses that affected Charles Darwin, the latest theories support the idea that, given his symptoms, he may have inherited a mitochondrial mutation from his mother’s side, through the Wedgwood family. This mutation would have been already present in his maternal grandmother, his mother and several uncles and aunts on his mother’s side of the family, as well as some of his siblings. This mitochondrial mutation in Darwin would not have been inherited by his children because it is not transmitted by male family members and his wife Emma would not have been a carrier of the mutation, since her mother was not a Wedgwood (2). Again, it would be necessary to carry out genetic studies to confirm this hypothesis, using what are supposedly hairs from his “iconic” beard.

As regards the thriving business of the Wedgwood family at the time, a series of ups and downs and closures finally caused it to fall into the hands of multinational companies, althougha museum remains and the various items are listed at high prices among collectors.

The Relationship Between Patents & Cryptocurrency

Carly Klein
Start The Darwins; a Bright Family With a Dark Side