In Search of New Flavours

Present and future in the fight against Alzheimer's

Have you ever wondered how science fiction novels have impacted the idea we have about Artificial Intelligence or how  Snow Crash, Neal Stephenson’s novel, has impacted what we now call the  Metaverse?

The use of science fiction to explore our world is similar to scenario planning in Futures Studies, it shapes our ideas about the future, and goes beyond anticipating artifacts that once seemed impossible to us like Verne’s submarine or the geospatial satellites of 2001 Space Odyssey, science fiction:

But most importantly, it determines the way we structure scientific thought and intervene in the future. And we are not just discovering this now, because as Leah Zaidi (Zaidi 2019) reminds us, authors such as H.G. Wells and Arthur C. Clarke, have often and successfully crossed over from one side of science fiction and futures studies to the other.

The novum of Science Fiction as a Plausible or Possible Future

Hard Science Fiction pushes the boundaries of science with imagination. That is why so many scientists have explored its realms, but it is clearly distinct from fantasy.

The novum -that scientifically novel, sometimes mysterious, and almost always surprising element on which the speculative narrative is based- must be consistent with current scientific knowledge, and in this respect it is close to the concept of Plausible Futures, central to current futurology. Futures that, if they occur, we see as more distant than those we see as probable, but that cannot contravene our logic, nor the laws of scientific knowledge that we have at the point in time when we imagine them.

The potential of creating fictional worlds in Futures Studies

Alex McDowell, Creator of the Minority Report worldbuilding in 2002, and Peter von Stackelberg explain what fictional narratives can bring to the table:

The creation of geographically, socially and culturally coherent worlds, among other capabilities, has a long history, reaching new levels of sophistication in 21st century science fiction. The richness of “storyworlds” – the “universes” within which stories take place – provides us with detailed rules of the context in which a larger reality unfolds that extends beyond a single story, and has the potential to provide us with deeper learning about the underlying systems that regulate those worlds. (Von Stackeeelberg/McDowell 2015)

The design fictions of Experiential Futures suggested by authors such as Stuart Candy, prototype, with short videos, designs, and other artifacts or constructs, the possible outcomes of our future life. The ultimate goal of this trend is to provoke a reaction in society and analyze it, using narrative to provoke activism about the future, and can benefit from the world-building techniques used by screenwriters and writers. 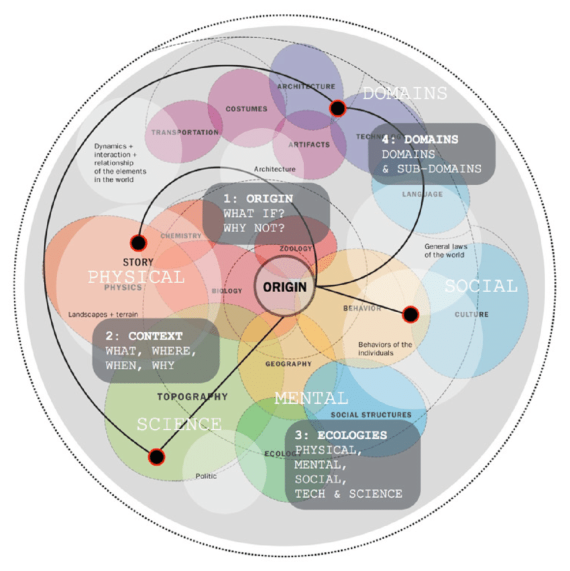 McDowell puts forward a detailed theoretical framework called Mandala that connects all the fundamental elements of society, culture, politics, science, technology and infrastructure of the world of the future.

Another valuable point is that science fiction films allow us to make prototypes that allow us to experience the use of a given technology in a human context and analyze the impact they will have on human lives. In the fictional world, what film scholars call diegesis, these technologies exist as “real” objects that work properly and that people actually use (Kirby, 2010).

Lastly, the relationship of futures narratives to theories such as Social Constructivism has been highlighted by several scholars. A central idea of this sociological theory is that whenever we use words or other symbols to refer to objects in our world we are constructing them. And, therefore, prediction is also a social construction. In narrating we intervene in the world. In narrating the world, we construct it. In writing science fiction we intervene in the science of the future.

In the words of Dutch researcher Sofia Kaloterakis, “Science fiction narratives structure our imaginative models about technoscientific projects such as robotics or space exploration”.

3. Candy, Stuart. «The Futures of Everyday Life: Politics and the Design of Experiential Scenarios». Journal of Futures Studies, 15th august 2010.

4. Kirby, David A. «The Future Is Now: Diegetic Prototypes and the Role of Popular Films in Generating Real-World Technological Development». Social Studies of Science. 2010

Tissues from the Lab