Should the Time Children Spend in Front of Screens be Limited?

Questions and Answers about Animal Experimentation

Pokemon Go: How virtual reality will revolutionize the way we play

The Legend of Newton’s Apple Tree

If there exists any famous tree in the history of science, it is undoubtedly the apple tree that inspired Newton to formulate his Theory of Universal Gravitation. Supposedly, one summer afternoon in 1666, the young Isaac Newton, who had taken refuge in the family country estate of Woolsthorpe Manor to escape an outbreak of plague in the city, was resting in the shade of an apple tree when an apple fell on his head, a painful moment of inspiration that made him question why everything always fell in a straight line.

And that reflection would lead him to formulate his famous Law of Universal Gravitation… or so the story goes. Science is replete with legends and apocryphal tales for the greater glory of its protagonists, from Archimedes jumping out of the bathtub and running naked through the streets of Syracuse, to Galileo’s experiments on the Tower of Pisa. Is Newton and the apple tree another such example?

Brainteaser 1: Newton, in the shade of the apple tree

This diagram shows an example of “Twin tents”, a classic logic puzzle on a board occupied by trees, in which:

In our version, we ask you to place a Newton in the shade of each of the apple trees (represented by green dots): 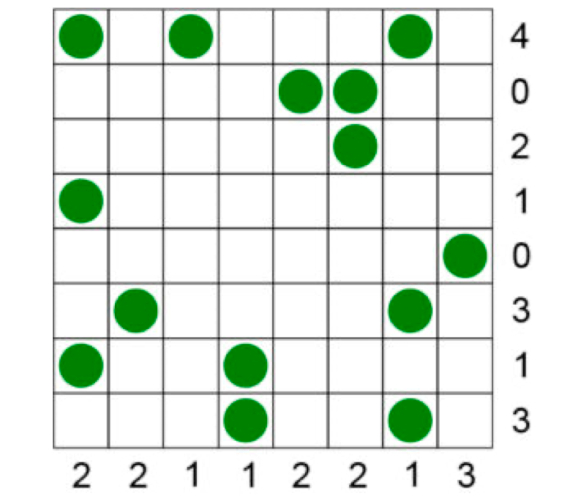 The story from Newton himself

In this case, the scientific legend is very close to the reality of the facts. In 2010, the Royal Society made public the manuscript Memoirs of Sir Isaac Newton’s life, written in 1752 by William Stukeley—one of the first biographers of the genius—who recounts in the work the story as he heard it from Newton himself:

“After dinner, the weather being warm, we went into the garden and drank tea under the shade of some apple trees… he told me, he was just in the same situation, as when formerly, the notion of gravitation came into his mind. It was occasion’d by the fall of an apple, as he sat in contemplative mood. Why should that apple always descend perpendicularly to the ground?, thought he to himself…”

This testimony seems to prove that the anecdote is true—except for the shocking addition of the apple hitting Newton’s head. Special effects aside, the apple tree whose fruit inspired Newton was officially identified in 1806 by Edward Turnor in his book A History of the Town and Soak of Grantham: “The tree is still remaining and is showed to strangers.”

His brother, Charles Turnor, completed the reference in 1820 by making a drawing of the garden showing the exact position of the fruit tree. Although Newton never specified which tree it was, it was the only apple tree growing on the estate, a specimen of the Kent Flower variety. Subsequently, dendrochronology confirmed that it was of the right age to be the protagonist of the story.

How tall is the trunk of the tree in the diagram in relation to its overall height?

Instead of crunching numbers, we challenge you to solve the problem by drawing straight lines, like the path followed by an apple falling from a tree. 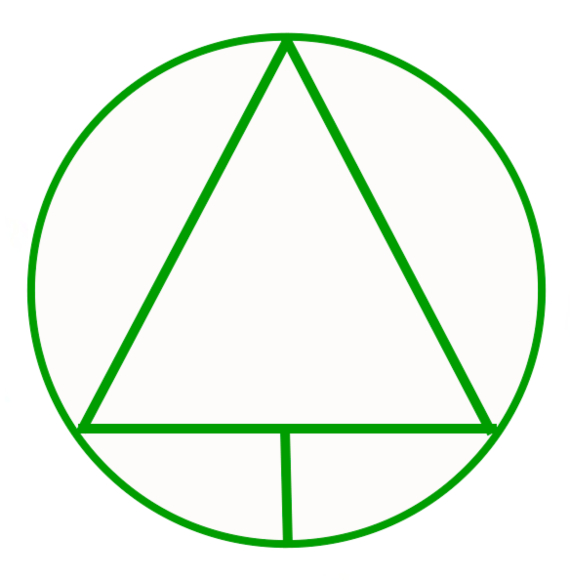 A tree on its way to its 400th birthday

From the mid-18th century, the tree was cared for by the Woolertons, the farming family who worked on the estate between 1733 and 1947. And when it was blown down by a violent storm in 1816, to everyone’s surprise it managed to re-root itself and continue growing. And there it remains to this day, receiving the loving care of its caretakers in the orchard of Woolsthorpe Manor, well on its way to its 400th birthday, still standing despite the perpetual pull of gravity and the continued production of apples.

Nowadays, numerous scientific and academic institutions around the world boast specimens genetically identical to the original tree grafted from its shoots, or direct descendants of the original tree grown from the seeds of its fruit. Despite this genetic identity, the irony is that apples from each of these trees experience a different gravitational pull and they fall to the ground with a corresponding acceleration. Because the Earth is flattened at the poles and gravity depends inversely on the square of the Earth’s radius, its value increases slightly as one moves from the equator to the poles. In fact, to be precise, this value in very few places coincides with the g=9.80665 m/s2 that students use in physics problems. Moreover, the Earth’s rotation causes all bodies on the planet to experience an outward force, which opposes that of gravity and which also varies with latitude—it decreases as we move from the equator, where it is at its maximum, to the poles, where its value is zero. So, given the chance to fall out of an apple tree, it would be better to fall from an equatorial one, which would be a somewhat softer fall.

Brainteaser 3: The Value of Clones

The International Gravity Formula is the practical (and approximate) expression for calculating gravity as a function of latitude that is approved by the International Union of Geodesy and Geophysics:

where λ is the latitude.

Calculate the specific value of the gravity experienced by each of the following Newtonian apple tree clones distributed around the world, and identify which one most closely matches the standard value (g = 9.80665 m/s2): 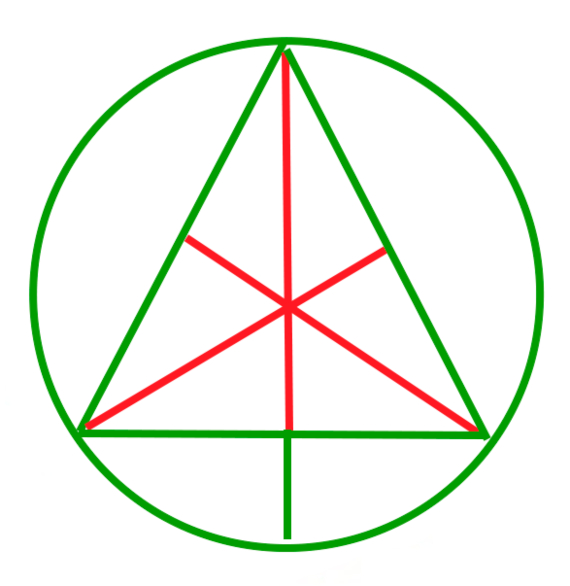 A quarter of the total height.

Therefore, from this list, the MIT tree is the one experiencing a gravity closest to the standard value, a reference value that, by the way, does not coincide with the gravity at the foot of Newton’s original apple tree (λ = -52.809238; g = 9.81319 m/s2).

Darwin’s Misunderstood Theory. Did We Evolve From Monkeys?