Six Species That Never Existed, but That Science Thought Were Real

Zika Virus: Why Now and What is Next?

Contagion process modeling is a field of study that cuts across disciplines such as applied mathematics and epidemiology. These processes consider populations of interacting agents where a pathogen spreads through the contacts between these agents. The usual models to deal with these types of processes are called compartmental models since they assume that each individual can adopt a set of states (for example: healthy, infected and recovered). In this way, at any one point in time an individual will be in one of these states while the state changes are given by very simple rules. For example: an individual in a healthy state will become infected when interacting with another individual in an infected state. These models may also reflect the propagation of information in a population. In this case the different compartments would reflect the state of an individual with respect to their knowledge of this information (e.g. ignoramus and expert), so that the step from ignoramus to expert also takes place through “contagion” from an expert to an ignoramus.

Mathematics for hunting the virus

The mathematics that make it possible to conceptualize and structure these contagion models are based on network theory and analysis of complex systems. Thanks to the techniques that make it possible to describe the dynamics of distributed systems, it is possible to determine the conditions under which an epidemic or viral information phenomenon occurs. To give realism to these types of models, we must incorporate the way in which individuals interact with each other and this is where network theory proves to be very useful: the structure of the networks contain the links between individuals. These networks reflect the skeleton through which the information flows with Twitter, for example, being a case of this type of social interaction architecture.

A step further in modeling contagion processes in real systems (populations) requires the use of metapopulation models. In these models, a network is available where nodes account for locations (neighborhoods, cities, regions or countries) in which agents live. In turn, the union between two nodes reflects the possibility of traveling between the two that their inhabitants have. In this simple way, we can make use of real data on citizen mobility to incorporate them into realistic epidemic models.

Once we have introduced the two key ingredients identified, the modeling of contagion processes and mobility networks, we arrive at the third ingredient: socioeconomic inequality. One of the problems we face in today’s society is the increase in inequality between rich and poor, both at the human level (among the inhabitants of cities and countries) and between countries. A clear example of an unequal society can be found in Colombia where the income of the poorest 10% represents only 1.1% of total income, while the richest 10% is 42%. This inequality is reflected in the country’s tax system with 6 categories (or strata) of contribution, 1 being the poorest and 6 the richest. These categories are based on the place of residence of the families and therefore have a strong spatial component that is also reflected in the way of moving through the cities (it can be seen in the image with the mobility maps of each of the strata in the city of Bogotá, Colombia). 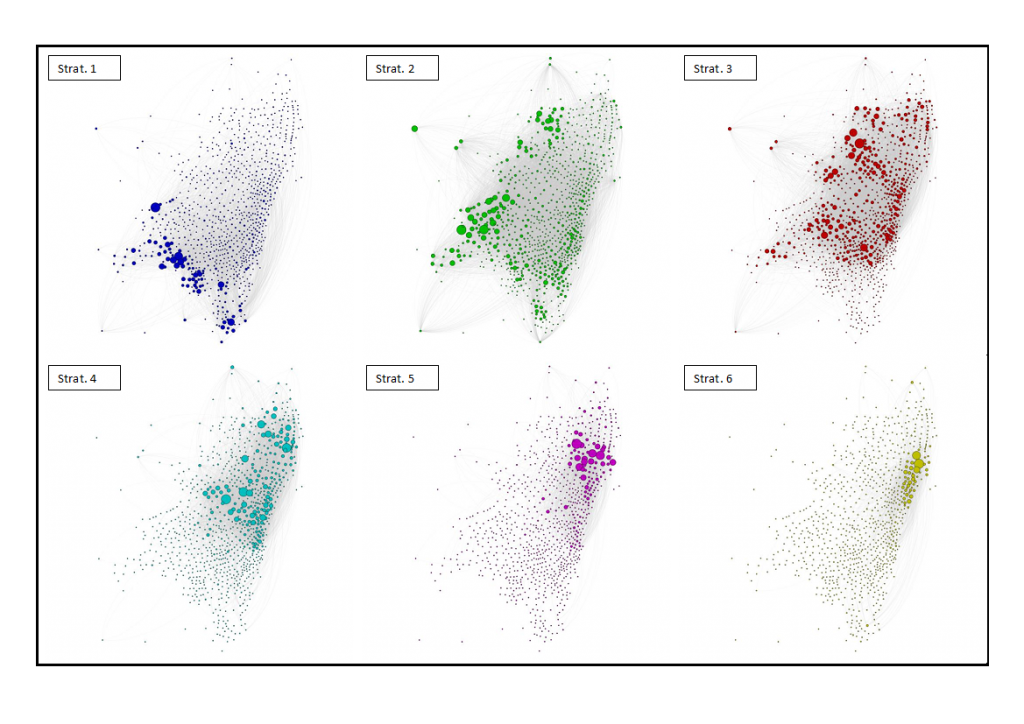 The result of these types of studies allows us to know, in the particular case shown, how a highly fragmented society is where each stratum has, predominantly, contacts with close strata. However, it is observed how mobility reduces the degree of segregation through which it is possible to raise, based on these findings, measures to reduce social distance within cities. From science to politics, we could conclude, how mathematical tools based on network theory allow us to determine what the most effective political actions are in the fight against inequality.

A Challenge from Maxwell for Physics Demons