Sustainable Housing for a Connected Society

Humanity’s appetite for energy remains unappeasable. Consumption trends of this essential resource have remained unwaveringly strong amidst the political-energy crises that shook the world in the late 20th and early 21st centuries (1973, Yom Kippur war; 1979, Iran-Iraq war; 1990, first Persian Gulf war; 2003, second Persian Gulf war) and the great financial crisis of 2008. Only the outbreak of the COVID pandemic in 2020 managed to slightly reverse this growth trend. The figure below shows how the world’s primary energy consumption has changed over the past two centuries, expressed in TWh (1 TWh = 1 billion Wh): 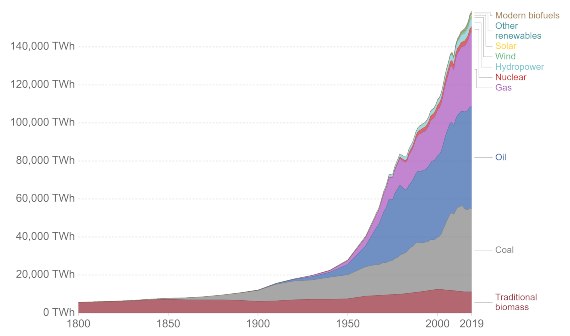 Image source: Our World in Data

In 2019, consumption stood at approximately 160,000 TWh and, judging by the previous graph, this trend is unlikely to do anything but continue increasing in the near future.

To analyze global energy consumption data – or data related to any other magnitude – it is essential to distinguishing between regions, countries, etc. in order  to avoid overlooking vital details. In general, these statistics are always conveyed in terms of “average” values, which need to be used with extreme caution, because they tend to conceal significantly different cases. Indeed, as the graph below shows, energy consumption rates per individual and year across the planet are extremely unequal: 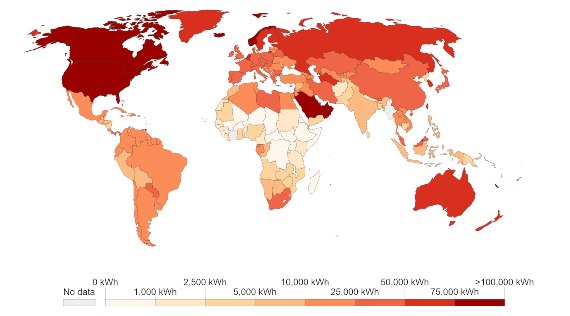 Energy use per person in 2019 in all countries in the world.

Image source: Our World in Data

The following figure provides a more detailed breakdown of the previous graph’s data. The vertical axis represents the daily per capita consumption of primary energy in 2019 (expressed in kWh) in the 90 most populated countries on Earth – about half of the existing nations – which account for 90 percent of the world’s population. The horizontal axis shows the per capita GDP of these same countries, measured in 2018 dollars: 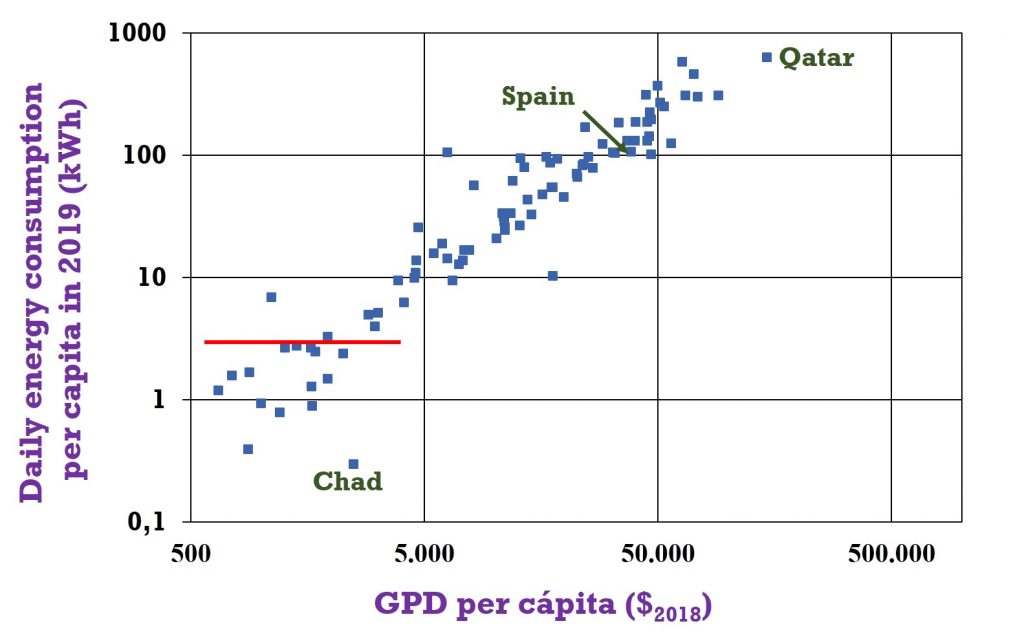 The scales on both axes are logarithmic. The red line indicates an energy consumption of 3.5 kWh per day, which is considered the subsistence minimum. Dotted on the graph is the poorest country on Earth in terms of energy consumption (Chad), the richest (Qatar) and Spain, which belongs to the club of what I call the First Energy World.

Sources: Our World in Data for energy consumption (2019) and  the FInternational Monetary Fund  for GDP per capita (2018).

The data on the vertical axis show the daily per capita primary energy consumption, taking into account all energy sources. Primary energy is the energy that is transformed into other secondary sources for practical use: electricity, heat, cold, mechanical energy to propel vehicles, etc. In other words, these figures, although expressed in kWh, indicate the consumption of all energy sources available to every citizen in each country (not to be confused with electricity consumption, which only represents 15 to 20 percent of the total energy consumed on a daily basis). The countries with daily per capita energy consumption rates below 3.5 kWh suffer extreme poverty, one of the many adversities they face. About 3,5 kWh per day is deemed as the minimum daily primary energy consumption that any person performing some type of activity needs to survive. The countries where such circumstances exist are the ones included below the red line in the graph.

In terms of per capita energy consumption, the world’s countries can be grouped into four large blocks:

The world’s average per capita primary energy consumption is 60 kWh, 17 times higher than the minimum subsistence threshold, which, as mentioned above, is estimated at 3.5 kWh. Considering a global population of about 7 billion human beings, these figures show that, if consumption levels were more equitable, the current level would be enough to cover the energy needs of about 120,000 million people. In this light, the energy problem stands not as a resource scarcity issue, but rather a problem of wasteful use and enormous inequality in the global distribution of consumption, as the richest 20 percent of the world’s population is responsible for 80 percent of all primary energy consumption.

While the disparity in terms of GDP is enormous, in terms of energy consumption it’s just mind-boggling: a Qatari citizen consumes more than 2,000 times the energy consumed by a Chadian every day. The daily energy consumption of the average Qatari is enough to cover the bare minimum needs of 180 people, while that of an average Chadian is about ten times lower than the daily minimum energy subsistence threshold.

In short, energy is one of the indicators that best quantifies inequalities across the planet. Now that the world is in the midst of an energy transition towards more sustainable sources compared to those that prevailed over the past two centuries, this issue should be considered with a view to mitigating, in as far as possible, the above mentioned inequalities.

and member of the Spanish Royal Physics Society