Biohybrid robots, the next step in the robotic revolution

Where Are the Earth’s Real Lungs?

The Energy Challenge: the Transition to a New Energy Model

Throughout this past year the Covid-19 crisis has concealed many of the  planet´s major problems. One of the most pressing is undoubtedly global warming, caused, to a large extent, by our current way of producing and consuming energy.

A multitude of politicians and scientists claim the launch of the Green New Deal as one more tool to use to get out of this situation. It emulates the famous New Deal that U.S. President Franklin D. Roosevelt promoted in the 1930s to get his country out of the Great Depression. The implementation of the Recovery Plan for Europe also includes among its objectives the economic decarbonization of the continent. In adjdition, the U.S. Biden Administration also seems to be setting ambitious goals in energy and environmental issues.

If these and other similar initiatives materialize, renewable energies will undoubtedly play a key role in not only achieving the promotion of policies that allow mitigating the virus´ terrible impact on the economy, but help lead us towards a true energy transition to achieve a long-awaited decarbonization process. But, to try to understand the magnitude of what is intended to be done and to try to place this enormous challenge in a broader historical framework, it is helpful to understand (and remember) that there have already been other energy transitions in the past, motivated by various factors. The content of this article is focused on reviewing that history.

Energy and energy transitions throughout history

Energy underlies all the major economic changes that have occurred throughout history, especially those of the two last centuries. The three great industrial revolutions that transformed the world over the last 250 years were powered by a variety of energy sources. Each revolution was accompanied by changes and diversification of the energy mix on the one hand and the appearance of new sources of energy on the other, both contributing to distinguish one revolution from the next.

The First Industrial Revolution took place between the end of the XVIII century through the XIX century, powered by coal, which made the use of the steam engine possible. The Second Industrial Revolution occurred during the first half of the XX century and was driven by the use of oil to power internal combustion engines, while the Third Industrial Revolution, which began in the second half of the XX century and continues until this day, has seen the surge of electronics and Information and Communication Technologies, driven not only by oil, but also by gas and the nascent use of renewable energies. At one time, it appeared that this Third Industrial Revolution would be powered by nuclear energy, but the high cost of installation and maintenance of uranium-fueled plants, coupled with the grave accidents of Three Mile Island in 1979, Chernobyl in 1986 and Fukushima in 2011 have consigned this energy source to a secondary role in many countries that once desired to rely on its use. This is one of the reasons why the energy mix has not changed substantially since the years 1970-1980.

The distribution of the various energy sources used by humans since the start of the XIX century to the present is shown in the illustration:

Since the 80s, “new” renewable energies (wind and solar, mainly) have been gradually added to the global energy mix alongside hydraulic power, which emerged at the beginning of the XX century. These new sources of energy should play a key role in the trend toward diversification of the energy mix and help to solve the dilemma between an unsustainable energy model and ever-increasing global demand.

2. The energy dilemma: depletion of fossil fuels and population growth

At present we are facing a “perfect storm” in the realm of energy, brought on by a lethal combination of depletion of fossil fuels and the increase in energy demand due to population increase and improvements in the quality of life of a significant part of the same. (I have analyzed this problem in more detail in a recently published book: Solar Energy. From Utopia to Hope)

Maximum consumption of fossil fuels, defined for oil as Hubbert’s peak has been or it will be reached at some point between 2000 and 2025. On account of this it has become imperative to find new energy sources to replace fossil fuels in no more than 40-60 years; that is, in our children’s lifetime: 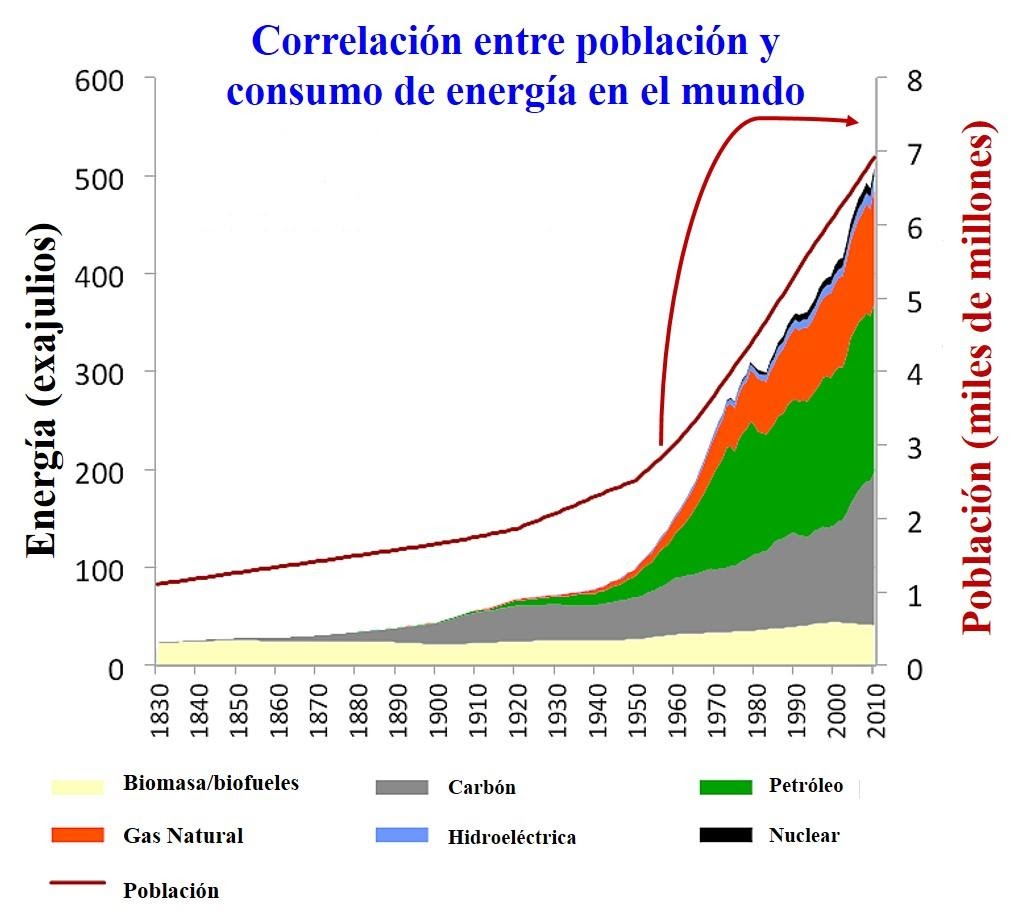 Population growth and growth in energy consumption in the period 1830-2010. Source: Adapted from this document (equivalence for energy units is 1 exajoule = 2.77 × 1011 kWh)

Historically, population and income increases have been the driving forces behind energy demand. As seen in the illustration above, the population has been multiplied by 4 and the energy consumption by 10. The connection appears obvious: more people with higher incomes means an increase in production and higher energy consumption.

We are therefore faced with a scenario where fossil fuels are in a phase of decline, while the population and energy consumption do not cease to increase. What should be done? The only possibility is to implement an energy transition that both satisfies increasing energy demand and prevents continuous irreversible damage to the environment.

Technologies for energy transition: the time for renewable energies

At present, the only energy sources in our reach that can replace fossil fuel-based energy are renewable sources. The most significant of these, due to their increased use, development and technological breakthroughs, are “new” renewable energy sources: wind, solar photovoltaic and thermosolar, to which we should add traditional energy sources, such as hydraulic and biomass energy.

All of these, especially those considered new sources, should be considered as replacement technologies that were the object of scientific curiosity in the 1970s and 1980s but have now become a necessary and indispensable part of the solution to the problem of energy stated in the previous section of this article.

As I described in the other article published on this platform, wind power was the first renewable energy source to be used on a large scale in the energy industry. Total wind power installed globally is shown in the following illustration: 651 GW had been installed at the end of 2019. As is the case in the use of solar photovoltaic energy (progressive installation shown in the same chart), the main disadvantage is its sporadic nature, which makes it somewhat unpredictable. Developing appropriate and large-scale storage systems is essential to increase the value of wind and sun-generated electricity. Nonetheless, wind power generation at present has already demonstrated its usefulness in the energy mix of numerous countries, including Spain and its future competitiveness with fossil fuels can only improve in the coming years.

There are three main obstacles to be overcome for swift energy transition.

As mentioned previously, oil, coal and natural gas currently account for 80% of the energy mix worldwide. Even with a high and continuous growth rate of renewables, in 20 years from now the share of these technologies in primary energy production will likely be below 15-20 percent, unless political decisions in the post-Covid era accelerate that transition.

Changing the energy model is a global challenge, witnessed by the enormous investment being made by the world’s major industrial countries to enhance energy transition toward a sustainable and fossil fuel-independent energy mix. The change is inevitable, already in progress in numerous countries and those are the first to learn to adapt will lead the change and be able to export their ideas and products to the rest. The energy industry will change gradually toward renewable energy and the transition period will be determined to a large degree by both public and private investments made in these energy sources.

In this sense, the investments envisaged in the European Recovery Plan could be a great boost for our continent towards this transition. But let’s not forget that in order for this energy transition to have tangible effects, it must be global. The transition in the energy model is not moving backwards, but just how quickly or slowly this change occurs depends on decisions taken now.

Professor of Electronics at Universidad Complutense, Madrid and member of the Spanish Royal Physics Society