The Periodic Table, the Crystal Ball of Chemistry

The History of the Number Pi

For his contribution to the development of catalysts in the chemical industry, compounds to accelerate reactions between molecules, the Spanish chemist Avelino Corma (Moncofa, Castellón, 1951) will receive, on October 24, the Prince of Asturias Award for Technical and Scientific Research, to be shared with the Americans Mark E. Davis and Galen D. Stucky. A member of the prestigious Royal Society of London and founder of the Institute of Chemical Technology (ITQ), a collaborative center of the Spanish National Research Council (CSIC) and the Polytechnic University of Valencia, Corma is the most cited Spanish scientist in his field thanks to more than 900 publications in international journals and 150 patents. As the creator of zeolites, micro-porous structures useful in the refining processes, and of applications in the field of renewable energy, his investigations fall within the framework of green chemistry, in search of greater efficiency by reducing energy consumption and the production of waste. 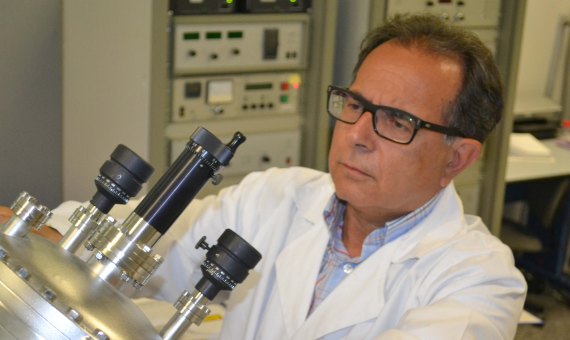 Question. In May, the choice for the Prince of Asturias Award for Technical and Scientific Research was announced. How did you welcome the news?

Answer. It produced surprise and excitement at the same time. There are many people who deserve it and, therefore, the chances of it being awarded to me were not so high. This is not just recognition for me, but also for the research team and the work we have done and for what we have believed in all these years. The jury considered that we have contributed significantly to the development of science and, at the same time, we have showed the ability to transfer knowledge to industrial processes that are operating today and competing with the best in the world.

Q. Your scientific career trajectory can be described as transitional, by your research dedicated to the fields of conventional energy sources and renewables.

A. I work in both fields by conviction, because I try to be realistic. Over a period of time, ten to twenty years or more, we will continue to rely on fossil fuels, but I hope that less and less over time. We must achieve the greatest efficiency in their use so that they last longer and we can produce the same amount of energy while emitting the least CO2. Using fossil fuels buys us time to be able to develop alternative and sustainable sources of energy that will shape our future. Therefore, I am forced to do the best I can with what we have and at the same time open up new sources of energy.

Q. The award recognizes your contribution to the development of catalysts, materials that increase the rate of a molecular reaction leading to the formation of a desired product, on which you are now working to develop their multifunctional capabilities.

A. In most molecular reactions, not only is the desired product generated, but other by-products as well. “The great magic” of the catalyst, so to speak, is directing the reaction to the product we want with the ultimate goal of achieving 100% selectivity. In some processes, we have exceeded 99%. There are some processes that are carried out in several stages before reaching the desired product, with each intermediate product needing purification and requiring equipment and energy. A multifunctional catalyst has the ability of turning the reactant into the desired final product without the need of separations or reactions involving intermediate products. All functions are brought together in a single catalyst and in one process. We have two industrial applications based on this type of catalyst, in processes that used to generate a quantity of by-product greater than the amount of final product, while now the by-product represents one hundredth of the desired final product. One of them has been applied in the field of fragrances for a Spanish company and another one, that is applied in the purification of natural gas to reduce the amount of sulfur parts per billion (ppb) with a very high efficiency, is already used in a dozen plants around the world.

Q. Your research is framed within green chemistry. Will this be the chemistry of the future?

A. The future will be getting product A to react to obtain product B so that we obtain only that product B while consuming the least amount of energy possible. This is the chemistry of the future. The key word is selectivity, to direct the desired product with the ultimate goal of achieving 100%, that is, with zero by-products. Right now many of the by-products are transformed in order to be useful and others are decomposed so that the final product does not have any environmental impact. Chemistry is nothing more than a way to generate new molecules and what we want is to generate fewer and fewer by-products. We cannot ignore the chemistry. Without it we would not be where we are, nor would we have the hope and that quality of life that we ​​have.

Q. Other projects of your team of researchers are dedicated to the implementation of catalysts in the field of renewable energy from biomass and photovoltaics, as well as contributing to medical treatments for diseases such as cancer.

A. For their medical applications, we study the achieved materials in order to explore their possibilities. For example, observing whether they can serve as a vehicle to distribute molecules –in this case curative pharmaceutical products– that already exist or have been discovered. With regard to renewable sources, in the case of solar energy we are working on two lines of research: the rupture of water molecules to produce hydrogen and the transformation of CO2 to obtain renewable hydrocarbons. We also study the transformation of biomass to produce liquid fuels and to form “building blocks”, i.e. molecules, to be used in chemical processes.

Q. At the beginning of your scientific career, Spain began to experience the rise of the chemical industry. How has the industry evolved so far?

A. It’s very different. Europe decided at some point that companies that could be “contaminating” would have to install their productions elsewhere. Nowadays they have realized that we cannot live only from tourism, trading and banking, but we also have to produce and they have begun to consider that chemical companies will have to be set up too. The level of improvement in the chemical industry has been incredible from the early days until now, with more controls and regulations. We must overcome the European hypocrisy that by not manufacturing we do not emit CO2, thereby meeting the 2020 targets. As we import many industrial goods, other countries emit the CO2 from production, so that global CO2 emissions do not decrease.

Q. A recent report of the Intergovernmental Panel on Climate Change raised the alarm about CO2 emissions by pointing out that, far from diminishing, the greenhouse gas effect is even greater. What has gone wrong?

A. What is failing in a certain way is our model of energy production. We have not managed to massively use competitive renewable energies, so we have to continue using mainly coal, oil and natural gas. It is remarkable that the country that will meet the Kyoto Protocol without having signed it is the United States, not because it will consume less power, but rather because some of the production that uses coal will begin using natural gas from fracking to generate energy. Natural gas has a ratio of carbon to hydrogen that is substantially lower than coal, which means it will produce less CO2 to produce the same amount of energy. If gas demand is high, it is going to be difficult to prevent the exploitation of those resources, unless political measures are adopted. Therefore, if they are finally used it should be done keeping a minimum or zero impact on people and the environment. The important thing is to devote effort and work to develop alternative sources of competitive energy, which are the key to the future. They will not be free and we will have to be willing to pay for them if we want to pass on a better world to our children and grandchildren.

Q. Your formative period was developed between Valencia, Madrid and Canada, but you decided to stay in Spain. Have you ever been tempted to work overseas?

A. When I was in Canada I received three offers from McGill University in Montreal, from Queen’s and from a major company in Akron, Ohio, but I wanted to go back and try to return to the country which had given so much to me, because I studied with scholarships. The beginning was very hard because I had no more than a table, a chair, paper, pencils and the library. My early work was not experimental but reinterpretation of data already published, opening a new line of thought on the mechanisms of catalytic cracking. Later I had opportunities to leave, but by then my team was forming, and that gave me a lot of encouragement to stay in Spain.

Q. The fruit of that work was the creation of the Institute of Chemical Technology.

A. We started with 12 researchers and now we are 180, 80 of whom were hired thanks to the resources we generate abroad. 20 leading companies in the sector work with us. They are domestic companies and from Europe and United States, and they also hire people trained in our center. We must break the dichotomy between applied work and fundamental research, because the competitive companies with high technological levels have development centers that carry out first-line fundamental research to generate knowledge.

Q. You have authored more than 150 patents, many of them in collaboration with companies. What is the level of patent creation in Spain?

A. Interestingly, in Spain the patent generation level is higher in universities than in firms, excluding the extensions of patents arising from overseas. Another issue is the practical value of these patents, if they really have deep meaning for their application or protection.

Discovery comes first. After that, experts are required to patent writing and planning. These experts’ role is trying to minimize risks associated to attacks from competing companies.

By Kristin Suleng for OpenMind