What Galileo’s Satellites are Hiding

Mauve: the History of the Colour that Revolutionized the World

Sustainability Notes nº1: Carbon Neutrality: Current Status and Outlook
See more books
Start Libra: What Is It and How Does It Work?
Economy Finance

Libra: What Is It and How Does It Work?

An interesting fact about Libra Facebook’s native currency which was announced June 18th, it’s inspired from three distinct elements: the Roman weight measurement system, the astrological sign for justice, and the French term for freedom. The culmination of these three elements embodies the essence of Libra, which aims to be a global cryptocurrency for everyone. The focus of Libra is to create a currency that empowers billions of people, allowing them to engage in frictionless financial transactions in a simple, secure, and cost-effective manner. [2]

But Facebook is launching two cryptocurrencies not just Libra.

As part of June 18th big reveal of the social network’s ambitious plan to create a global fiat-backed blockchain currency, (Fiat currency is government-issued currency like the dollar). Facebook said that in addition to Libra, the project will also issue a “Libra investment token.” Unlike Libra – a currency that will be broadly available to the public – the investment token is a security, according to Facebook. As such, the token will be sold to a much more exclusive audience: the founding corporate members of the project’s governing consortium, known as the Libra Association, and accredited investors.

And while Libra will be backed by a basket of fiat currencies and government securities, interest earned on that collateral will go to holders of the investment tokens. Each of the 28 companies that Facebook recruited to run validating nodes as founding members of the consortium invested at least $10 million for the privilege. The investment token is what they received as a financial reward.

“Because the assets in the reserve are low risk and low yield, returns for early investors will only materialize if the network is successful and the reserve grows substantially in size,” Facebook said in one of a series of documents that supplement the long-awaited Libra white paper. Further, the tokens will give holders proportional clout in the early governance of Libra. An investor who buys the tokens doesn’t have to run a node, but unless they do, they don’t get to vote as members. [12]

But every new trend, idea or concept in order to become mainstream must clear three obstacles namely : Technology , Business and Society (Government and Customers) which will be covered in this series of 3 articles.

The same applies to Libra, where, essentially, Facebook wants to make it as easy to move money around the world as it is to send a text message with lower fees, more accessibility and close-to-instantaneous transfers worldwide.  [2]

The company released a White Paper to explain the details. It doesn’t see the cryptocurrency as an attempt to replace the current financial system, as is Bitcoin’s aim. Rather, it’s intended to extend a digital payment method to under-served populations that don’t currently have easy access to traditional financial institutions. Worldwide, almost two billion adults “remain outside of the financial system with no access to a traditional bank, even though one billion have a mobile phone and nearly half a billion have internet access,” reads the paper. Libra aims to fill the gap.

How will Libra work?

Libra will be managed by a Swiss-based nonprofit. It is currently backed by Facebook and more than two dozen Founding Member companies, including Ebay, Uber, Lyft, Spotify, Visa, Mastercard, PayPal, Coinbase and venture capital firm Andreessen Horowitz. Unlike other cryptocurrencies, Libra will be backed by “real” government-backed assets from central banks to give it stability. 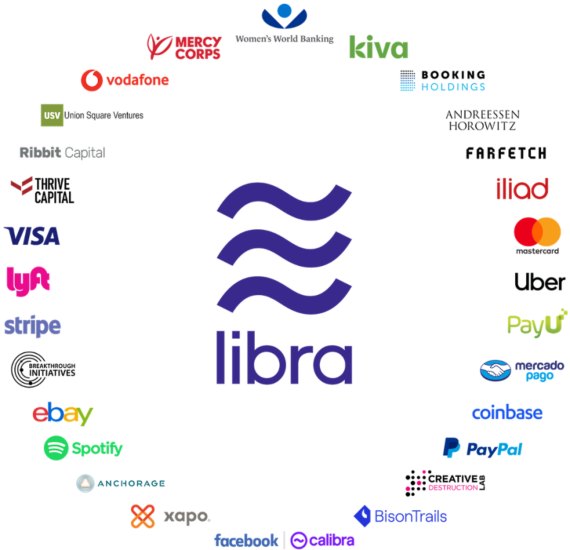 Facebook says Libra will be made available to Messenger and WhatsApp users, who can cash in their local currency to buy Libra. The currency will be held in a digital wallet called Calibra and can be spent on products and services at participating merchants, just like any other currency.

To withdraw funds, users will be able to convert their digital currency into legal tender based on an exchange rate. It won’t be so dissimilar to when you exchange U.S. dollars for euros during a European vacation, for example. For those worried about security, Libra payments will not be connected to a user’s Facebook data and won’t be used for ad targeting.

Libra will not be available until the first half of 2020, so you can’t buy the currency today. Once it does become available, there should be several ways consumers can buy the currency, and you won’t necessarily need to go through Facebook.

Transaction fees will likely be lower than those currently charged by traditional finance companies, which will primarily benefit merchants, but also people who, for example, routinely send money to family members abroad and are forced to rely on expensive wire transfer services.

How is this different from a credit card?

One of the purposes of Libra is to serve people who do not currently have access to traditional banking and financial tools. Currently cryptocurrencies can be used like a credit card to buy goods online. But Libra will theoretically go beyond that. Consumers will be able to purchase the currency and use it at participating merchants.

“You have a balance of, say, $100, you go to a merchant, you scan your smartphone for a $10 purchase, the Libras are taken out of your account and held by the merchant,”.Transaction fees will also be lower than they are for traditional forms of payment. Calibra is similar, then, to a payment network like PayPal, but uses the cryptocurrency Libra rather than a fiat currency, like the U.S. dollar for transactions.[1]

Libra will be a stable digital currency, which will be fully backed by real assets stored in the Libra reserve. Stablecoins are cryptocurrency that are stable in value, usually pegged from a real-world currency (such as US$) or a commodity (such as gold) that are stable in nature.

The Libra reserve is created through funds originating from both investors in the separate Investment Token, and users of Libra. This means that you can invest in the project through an Investment Token that could potentially pay out dividends in the future or if you are keen on getting your hands-on Libra coin itself, you have to convert your local currency into Libra.

Essentially, Libra is only created when there is more fiat with which it is either exchanged or backed up. The Libra reserve will then be invested in low-risk assets that will yield interest over time, which will then be used to cover operational costs, support low transaction fees, and pay dividends to Investment Token investors who helped jump-start the ecosystem. The stability of Libra will therefore be supported by a global basket of fiat currencies and low-risk assets; likewise, you can convert your Libra at any time according to the prevailing exchange rate to your local currency.

Facebook will relinquish control over Libra, instead conferring control to Libra Association, a Geneva-based non-profit organization with a long list of prominent founding members, including Paypal, Mastercard, Stripe, Visa, eBay, Lyft, Spotify, Uber, and Coinbase. Currently, there are 28 members, each of whom are required to invest $10 million into the development of Libra.The Libra foundation aims to accumulate a total of 100 partners with a reserve fund of $1 billion, which is going to be used to manage Libra’s price stability. All members will also be granted a single vote for the governance of Libra, with each entity serving as nodes in the Libra network.

The association will also spearhead Libra’s native open-source technology, by promoting its developer platform, which is fueled by its own programming language. Given the wide reach of the cumulative networks of all members in the association, it is not hard to imagine that there will be a colossal base of ready users for Libra, something which would have been incomprehensible with any other past cryptocurrency projects, particularly on this scale.

Triangles in the Sky

Ventana al Conocimiento (Knowledge Window)
Start Libra: What Is It and How Does It Work?