Eating Plant-Based, Organic and Local: Is It Really the Healthiest and Most Sustainable Way to Go?

Lessons From Covid for Dealing With an Ageing Society

The Role of Social Networks in Mental Health

Women Inventors Who Changed Our Lives

Although the number of patents that include at least one woman inventor has skyrocketed in recent decades, women still account for less than 20% of the total number of patents in the US. According to the Institute for Women’s Policy Research (IWPR), which has compiled this data, the under-representation of women in science and technology is compounded by the fact that women are even less prevalent in patent-intensive fields such as engineering.  This situation is exacerbated by more general obstacles such as the gender gap in the world of work, which in turn reduces the networks and resources available to women for patenting. Yet, stresses the IWPR, “increasing diversity and promoting women’s more active participation in commercial science could produce even more effective technologies in the future.” Proof of this are these revolutionary technologies that we currently use every day, whose creators were women, who in most cases went unnoticed in a world in which it was mostly men who achieved visibility. We rediscover their stories and reclaim their creations, without which our lives would be very different. 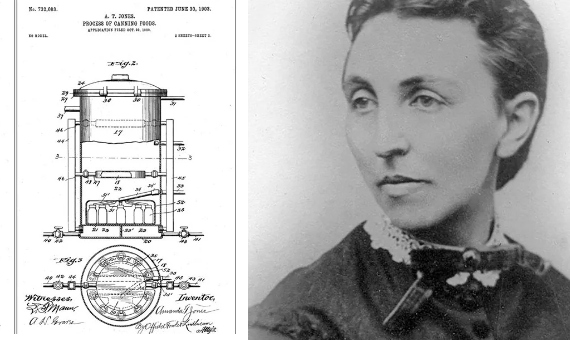 New York inventor Amanda Jones (1835-1914) developed the Jones Process for preserving food in 1872. She devised a method of vacuum packaging, which she improved with successive patents, until fruit, vegetables and meat could be stored for much longer than usual. Her ideas ranged from sterilisation before packaging to dehydration of the products, while always keeping the food in an atmosphere-free environment, which prevented the proliferation of microorganisms that degrade food.

Before becoming an inventor, Jones wrote poems and short stories, which she published in six books. In an attempt to change her life, she founded the Chicago-based Women’s Canning and Preserving Company. A strong advocate of women’s rights, all the shareholders of her company were women, as were all the employees. But her business venture failed and she eventually had to emigrate to Kansas with two of her sisters. There she continued to work on perfecting her inventions until her death from the flu. 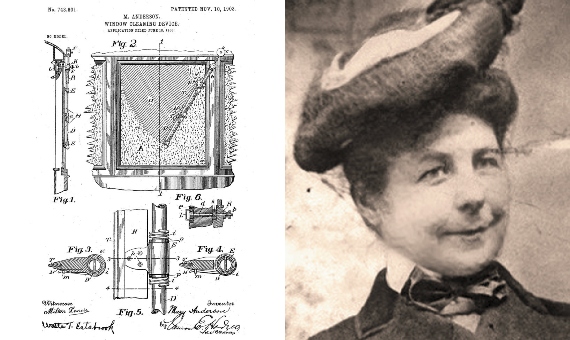 Mary Anderson (1866-1953) was a multi-faceted American woman who worked in real estate development and viticulture, although she will be remembered as the inventor of the windscreen wiper. She had the idea for its development on a tram ride through New York. She noticed that the driver had to exit the tram every few minutes to clean off the windscreen. Back in her native Alabama, she decided to devise a device that would clean it automatically, and eventually built one with the help of a local company.

In 1903 Anderson obtained her first patent, which was for 17 years, for a machine that cleaned the front window of the car and could be controlled from inside the vehicle using a lever: in essence it was already a device similar to today’s windscreen wipers. Two years later, in 1905, she tried to sell her invention to a Canadian firm, which refused to buy it. In 1922, after Anderson’s patent had already expired, Cadillacs became the first cars to adopt windscreen wipers as standard equipment. 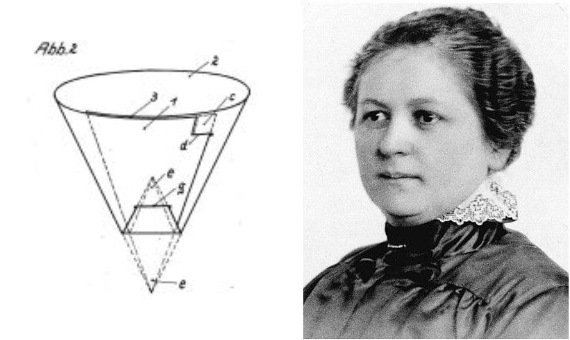 Melitta coffee machines are named after Melitta Bentz (1873-1950), the German woman who developed the coffee filter in 1908. As a good housewife, Bentz noticed that the strainers of the time did not filter the coffee well and left coffee grounds in the drink. Determined to find an alternative, she tried different types of filters and even used blotting paper—which she obtained from the exercise book of one of her children—on a perforated plate. In this way she succeeded in making coffee without impurities, which was a great success and encouraged her to set up a business based on her invention.

After a halt in the production of her filters during the First World War, demand for her product reached 100,000 units in 1928. With the outbreak of the Second World War, production stopped again, only to recover later. At the time of Bentz’s death, her company had sales of almost five million Deutschmarks. 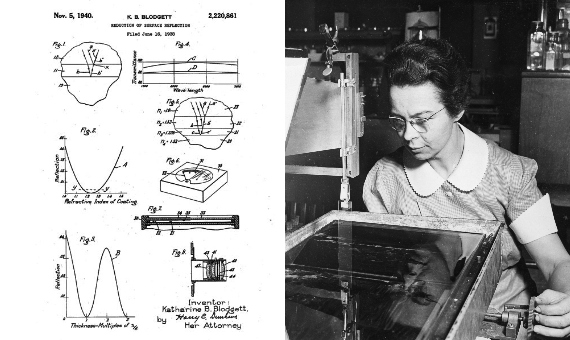 The first woman to receive a PhD in physics from Cambridge University, the American Katharine Burr Blodgett (1898-1979), obtained eight patents during her lifetime, most notably for anti-reflective glass, which she developed while working at General Electric. Normal glass reflects a significant portion of light, but Blodgett discovered that by using very thin layers of a substance as a coating, she could get 99% of the light to pass through it. She patented this method in 1938 under the name “Film Structure and Method of Preparation“, which for a long time was the only way to obtain transparent glass. Her invention is now used in eyeglasses, cameras, telescopes, windscreens, computers and television screens.

Before her big invention, at the age of just 21, she had researched the chemical structure of gas masks at the height of the First World War. Blodgett determined that carbon molecules could absorb almost all of the poisonous gases from the chemical weapons of the time, which helped improve the masks during the Second World War II. Her work saved many lives. 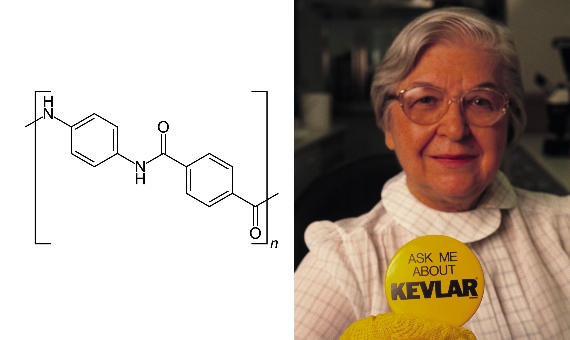 While working at the DuPont Chemical Company, American Stephanie Kwolek (1923-2014) discovered Kevlar (polyparaphenylene terephthalamide, by its scientific name), a yellow fibre five times stronger than steel. Kwolek was looking for tough, lightweight materials for the manufacture of tires, so the first use of this fibre was to make wheels. Today it has more than 200 applications, the main one being in the production of bulletproof vests for law enforcement agencies around the world. It can also be found in submarine cables, helmets, aerospace products and car brakes.

Kevlar was not the only material Kwolek worked with; during her lifetime she was awarded 17 patents. Her work earned her the Lavoisier Medal and induction into the National Inventors Hall of Fame, only the fourth woman to do so. After 40 years at DuPont, Kwolek retired in 1986 but continued to work to bring science to young people, especially girls. 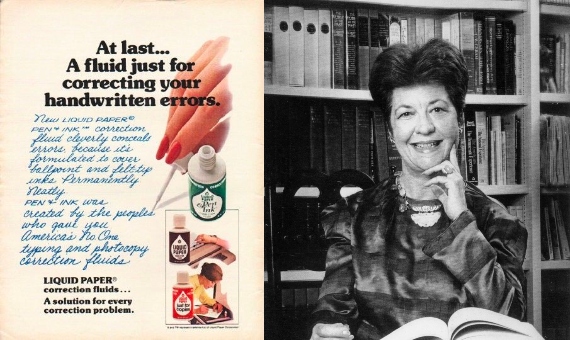 In 1956, American typist Bette Nesmith Graham (1924-1980) invented the first correction fluid, which she initially called Mistake Out. She wanted to effectively eliminate the mistakes she herself made in her work, where electric typewriters were beginning to be used. She developed a type of white tempera paint that covered them over, and on which she could retype. She mixed the first batch of the liquid in her own kitchen and then distributed it to her co-workers in little bottles bearing the name of the product.

Two years later, in 1958, Graham founded the Mistake Out Company and continued to work from home in the evenings and on weekends to generate those bottles. Shortly thereafter, she changed the name of her invention to Liquid Paper and offered it to IBM, which declined the offer to acquire it. Finally, in 1979, the Gillette Corporation bought Graham’s invention from him for almost $50 million (almost $190 million in today’s dollars). At the time, 25 million bottles of Liquid Paper were produced every year. 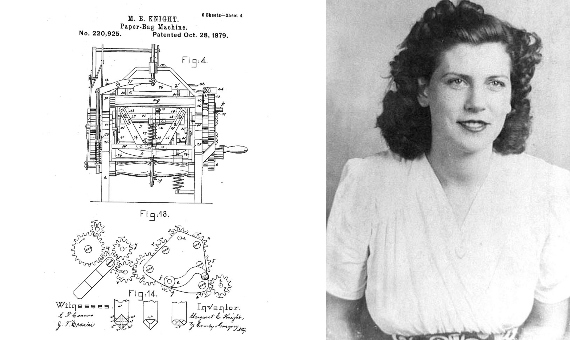 The paper bag has recently gained a new lease of life with the replacement of plastic ones, but this simple invention was already in everyday use in the 19th century. Of course, back then the most common industrially produced paper bags were little more than large envelopes with a V-shaped bottom, of small capacity and which could not be held upright. There were the flat-bottomed ones we know today, but they could only be made by hand and were expensive. That all changed in 1868, when the American Margaret Knight (1838-1914), with little education, created a machine capable of cutting, folding and gluing flat-bottomed paper bags, which previously required the work of 30 people.

When Knight went to patent her invention while building the prototype, she learned that someone who had visited her workshop had stolen her idea and beat her to it. She had to sue to get her invention back, and won. In 1870, she founded the Eastern Paper Bag Company, but left the company in the hands of others to continue doing what she really loved, inventing. She left behind almost thirty patents for motors, window frames, shoe-making machines and others. On her death, an obituary compared her to Edison. 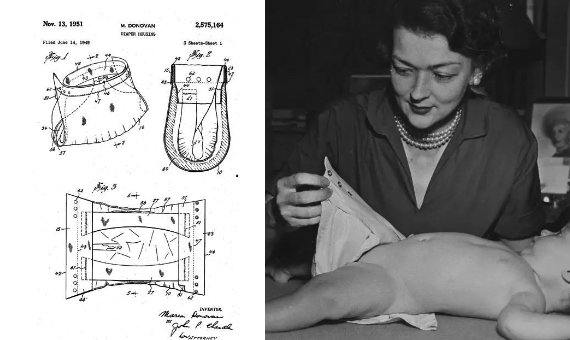 It is often said that inventions created by men, who have historically held the vast majority of patents, have neglected women’s problems. And since it has traditionally been women who took care of babies, perhaps that is why cloth diapers were used until the mid-1950s, with the result that an accident could also stain clothes and sheets. At that time, rubber pants did exist, but they caused dermatitis in babies.

In 1946, Marion Donovan (1917-1998) began experimenting with her shower curtains to make an airtight, breathable and leak-proof diaper with a pocket for the absorbent material. After many tests, she came up with the perfect design, made of nylon parachute cloth and with snap fasteners instead of safety pins. But she couldn’t find anyone willing to make them, so she decided to manufacture them herself. And when she put them on sale at Saks Fifth Avenue in New York, they were a huge success. Eventually Donovan sold her four 1951 patents to Keko Corporation for one million dollars. She subsequently introduced disposable paper models, but again failed to find an interested manufacturer, until her ideas became the basis for Pampers diapers introduced by Procter and Gamble in 1961.

As in the previous case, it may seem unusual today that until 1977 no one had bothered to invent a bra so that women could do sport without the uncomfortable and even painful movement of the breasts, something that normal bras were not designed for, as their seams and clasps also caused chafing. That year, Lisa Lindahl (1948), an amateur runner, put the idea to her childhood friend, theatre costume designer Polly Smith (1949). Together with Smith’s assistant, Hinda Miller (1950), they began tests by sewing together two jockstraps that men used for sport or dance, as the male version of the problem had been solved since the 19th century.

Lindahl tested this first prototype, and in 1979 the three women inventors patented the Jogbra, a compression bra made of lycra, with no interior seams in the front to prevent chafing, crossed straps and an elastic rib band underneath for support. It was an immediate success that revolutionised physical activity for millions of women. In 1990, the company was acquired by Playtex Apparel, which in turn later became part of the sporting goods company Champion. In 2001, Lindahl designed a special variant of the bra adapted for breast cancer survivors.