How Science can Defeat the Coronavirus: Challenges and Tools

How Much do You Know about Mathematics?

The Top 10 Science Books to Read in Summer

Beaches or swimming pools are ideal places to disconnect from daily routine and increase our understanding of the brain, the mysterious composition of the universe or the future of the planet. Here we present 10 essential books to discover what happens at the frontiers of science.

The future of our mind, Michio Kaku. Editorial Debate, 2014

In The future of our mind, one of most renowned scientists in the world, the American theoretical physicist Michio Kaku, places himself at the border between recent advances in neuroscience and science fiction. Kaku takes the reader almost hand in hand across laboratories worldwide into a future where our memories can be recorded, where we can practice telepathy, record videos of our dreams and control the minds of others. Kaku, professor at New York University and expert on string theory even believes that in the not too distant future we could eventually save all our brain’s knowledge in a computer.

“Stop drinking beer,” said the doctor to physicist Stephen Hawking after he fell down the stairs in his final year as student at the University of Oxford. But what made Hawking stagger was not drunkenness, but the beginnings of ALS, which has left him stuck in a wheelchair in recent decades. With his characteristic black humour, the world´s best known living scientist reviews his life in this book, from his sentimental dramas –and two divorces- to the stories that emerged from his research as Chairman of the prestigious Lucasian Chair at the University of Cambridge, the same one held by Isaac Newton. “Even though his chair was not electrical,” jokes Hawking in his biography.

After reading the Dutch biologist Frans de Waal´s work, it is impossible to see a non-human primate under the same perspective. De Waal has spent decades studying the behavior of populations of chimpanzees and bonobos and has observed cooperative attitudes, empathy and even grief after the death of another individual. The biologist, one of the most famous primatologists in the world after the publication of his books Our Inner Ape and Primates and Philosophers, redisplays in The Bonobo and the Ten Commandments the fact that emotion and feelings are not unique to humankind. 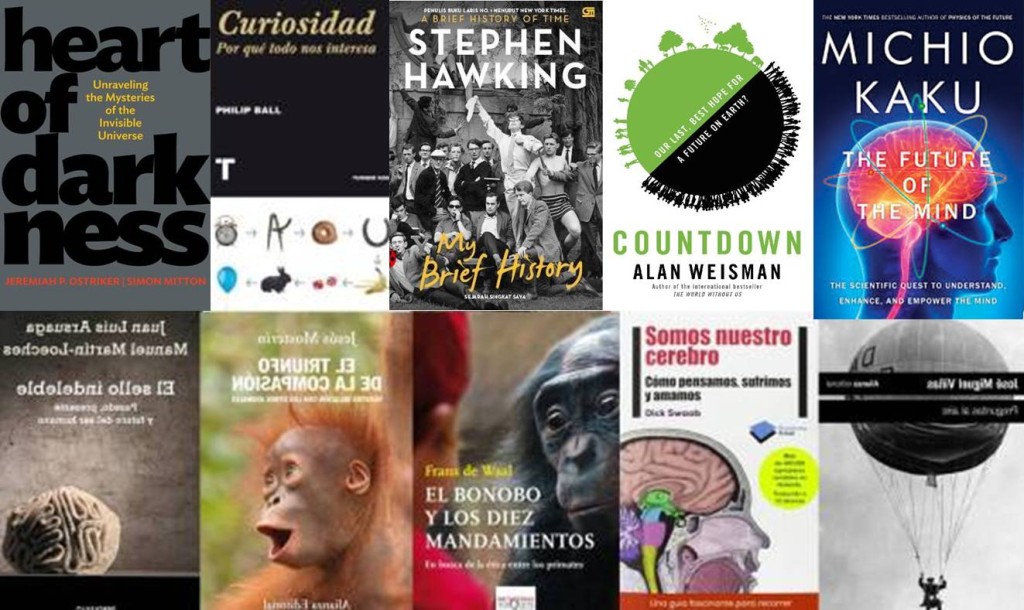 We are our brains: how we think, suffer and love,Dick Swaab. Platform, 2014

Dutch neurologist Dick Swaab has managed to make his book We are our Brains a bestseller, in part thanks to his controversial statements -such as the fact that the sexual orientation of a person is determined during the embryo´s pregnancy-, and in part thanks to other factors such as hormones secreted by the mother. Beyond these assertions –which are at the edge of science-, Swaab carries out a fairly rigorous yet entertaining narration of the changes in the brain related to sexuality, puberty, faith, psychological problems and anorexia. In short, he tries to answer the question: Why are we the way we are?

Every four-and-a-half days another million people are born on this planet of limited resources. For everyone in the world to have a living standard similar to that of developed countries, it would be necessary to have the resources of three planet Earths. With this thesis as a starting point, journalist Alan Weisman -in Countdown– travels across dozens of countries with the purpose of finding solutions to this crisis, with the help of experts from different nationalities, cultures and religions. The book eventually becomes a coral proposal to save the planet.

All the matter that we know and can see through our human instruments represents only 5% of the universe. The rest is dark matter and dark energy, the two enigmatic main ingredients of the cosmos. The astrophysicist Jeremiah Ostriker, professor emeritus at Princeton University (USA), was one of the first to predict the existence of dark matter, which constitutes 26.8% of the universe, although no one knows what it is exactly; this also occurs with dark energy (68.3%). Humans know that they exist due to the effects they cause on known matter, just like when we know that a sack is full without knowing its content. In Heart of Darkness, Ostriker and science historian Simon Mitton guide the reader across this mysterious and existential angst generating universe.

Why is the sky blue? How fast do raindrops fall? Can a rainbow occur in the moonlight? Why does the wind blow? And so, until 200 questions are answered by physicist José Miguel Viñas -known for his work as a weatherman at Radio Nacional of Spain and on social networks including Twitter- under the alias @Divulgameteo. The book is a worthy successor to his earlier work, Weather Curiosities (Alianza Editorial, 2012), on which Viñas gave answers that remain valid for everyday questions like, why do airplanes fly? And, why does the color of the sea change?

Paleoanthropologist Juan Luis Arsuaga, co-director of excavations at Sierra de Atapuerca (Burgos), one of the most important human fossil sites in the world, manages to provide in The Indelible Seal a pleasant and thorough account of what makes us human. Accompanied by psychologist Manuel Martín-Loeches, expert on the origins of language, Arsuaga again creates a reference work for those interested in human evolution, as he did with The Chosen Species, The Neanderthal’s Necklace and The Riddle of the Sphinx.

Curiosity. How science became interested in everything, Philip Ball. Turner, 2014.

Londoner Philip Ball is one of the most authoritative voices to pay tribute to human curiosity. Ball -a chemist, doctor in Physics and editor of the scientific journal Nature for two decades- is the author of more than fifteen books on different subjects, from the scientific origin of the passion for music to the importance of shapes in nature. In Curiosity. How Science Became Interested in Everything, Ball masterfully writes about the path of curiosity from vice to virtue: from a time when it was something reprehensible -as exemplified by the legend of the original sin of Adam and Eve- to an era marked by the construction of the world’s largest machine, the LHC, built to study tiny particles like the Higgs boson.

On the border between science and philosophy, Jesus Mosterín reflects -in The triumph of Compassion- on our relationship with other animals, which are “capable of awakening the best and worst in ourselves”. Sticking to rationality and ethics, the Spanish philosopher does not avoid the thorniest issues, like the status of pets, livestock, hunting, animal research and bullfighting. With no simplistic approaches, Mosterín defends the moral consideration of animals and calls not to suppress affection for these creatures.

Environment
Convert CO₂ From Greenhouse Gas to Raw Material
Environment
How Our Medicines Pollute the Environment
Environment
Whatever Happened to… the Ozone Layer Hole?

The Robots That Will Change the World Are Already Among Us