A More Practical Banking Sector Thanks to the Language of Hackers

The Science of Sales: the Christopher Columbus of Turnover

If you’re planning to grow your technology business substantially, and particularly if you’re looking for investors to help you roll out your plan, you’ll have made an estimate of your future turnover and cash flow. But have you checked the sales forecast you need to meet that turnover? Will you be able to respond if you come upon a business opportunity? Christopher Columbus did.

If you set up an America fast-food franchise it’s very easy to forecast your future sales. If they know the potential location of the outlet, franchisers can very accurately estimate how many hamburgers they will sell in the next three years. And based on their experience and their big data, they’re likely to be quite close to the mark.

However, technology companies who wish to scale up their new ideas do not usually have such an easy time of it. New markets to colonize, traditional solutions to replace, customer experience to change –all these aspects make it very difficult to estimate potential revenues. But with help from consultants’ reports, working with their own hypotheses, and –in the best cases– with a certain history from which to extrapolate, entrepreneurs can predict their future turnover. And from there, with a number of other assumptions, they can obtain the cash flows with which to attract investors.

In this chapter in the series on the Science of Sales, we’re going to share ideas about the need to manage sales forecasts to be able to ensure the success of our project.

Christopher Columbus expected to reach Cipango –modern Japan– and the lands of the Great Khan by traveling westwards. It took him over ten years to find an investor for his project. Some were reluctant to become involved because they saw the mission as too risky, others because they did not trust his predictions.

On August 3, 1492 he set sail westwards towards uncertainty. The expedition was easy for no one, and during the voyage there were several attempted mutinies. It is almost certainly true that if they had not sighted land on October 12, an agreement among the sailors would have forced them to turn around the next day. This would have led to their death, given the scarcity of provisions and the distance to be covered.

Columbus took some time to understand his achievement, having reached a different continent rather than the goal he had so fervently desired. However, he was saved by the credibility of his forecasts and the way he managed them in order to stay on course. And although he did not land where he expected, he succeeded in replacing a theoretical failure with a practical success. His enterprise was a triumph and his investor obtained an enormous profit.

Similarly, an entrepreneur should be able to justify, with guarantees, which opportunities among those he/she sees on the horizon will allow him to achieve his objective –what segments he plans to focus on, which of the existing projects he hopes to win and when, so he can transfer a potential return to the investor via the company’s income.

The calculated turnover should be the consequence of the contracts signed with our customers, which in turn will stem from the successful completion of some of the tenders submitted. We will also have worked on other tenders that we will not win (lost to the competition, canceled by the customer and so on). This set of business opportunities is usually known by the term “pipeline”.

Each opportunity in the pipeline today will have a percentage of success that reflects our statistical confidence about winning this project. As time passes and the moment of decision comes, the percentage may increase if we consider we’re going to win, or tend to zero if we think we’re going to lose. This will have an impact, either upward or downward, on the weighted value of our holding.

If we manage to sign a contract, we will need to deliver and invoice it (and collect for it…). Evidently there will be a rate of conversion of orders into income, and then a margin. For example: a contract worth 1 million euros can be invoiced in two yearly installments of 500K euros and provide a margin of 50K euros the first year and 100K euros the second.

When we build our income forecasts for investors, we will need to visualize winnable tenders, opportunities on the horizon, or simply fishing grounds where we can cast our nets. We need to assign them a probability of success and a potential closing date.

And that’s when we take a long hard look in the mirror. When you make a timeline for the opportunities you need to sign every month, with the financial amounts to be able to fulfill your income forecasts, that’s when you really see the credibility and robustness of your business plan.

There are entrepreneurs who consider that the forecasts they give investors over three or four years are really “an invention” or “just a piece of paper”. What they’re acknowledging is that they themselves don’t believe them. That the pipeline (which shows the potential and the probability) is not realistic. And if the captain of the ship himself does not consider the destination can be reached, why would an investor? 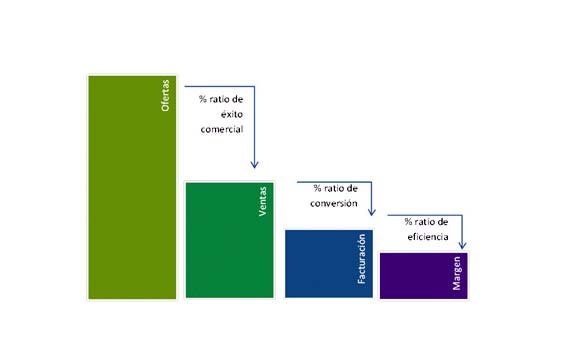 There’s no alternative but to go back to the beginning and make more iterations until the forecasts we obtain, albeit aspirational, can be considered achievable. We may not be able to travel as far as we said, but we’re much more likely to arrive.

There are technology companies that have grown slowly and are now seeking to make an exponential leap forward in their figures, but who do not have a good management of their sales forecasts. In fact, some have no forecast management at all, they tend to sell spontaneously.

The creation and management of the sales pipeline is one of the first signs of maturity in a company. It helps us establish the guidelines for success in our income and gives us a reality check so we can replace lost opportunities with others in order to meet our objectives and guarantee a return for our investors.

Director of Nautilo. Business Innovation Coach at the EU H2020.

Mentor of the madri+d Mentors’ Network

Beliefs
What Can a Philosopher Do for your Team?
Research
Resistance to Antibiotics: the Clinical Madness that is to Come
Geopolitics
Zealandia: What is the Interest of Having a New Continent?