What Can (And Can’t) Be Achieved by Cognitive Enhancement Neurotech?

Can You ‘Hack’ the Human Body?

Light and Shade in the Life and Work of Mendel

IN SEARCH OF THE LOST ORIGIN OF GENETICS

The image we currently have of Mendel is that he was the first to deduce the laws of genetics from crossing pea plants. But he, and especially his experiments, are surrounded by mystery and controversy.

THE GREATEST MYSTERIES OF THIS LIFE

One of the greatest mysteries surrounding the life of Mendel is why he joined a monastery and became a priest.

Mendel  was born in 1822 – July 30, 2022 will be his bicentennial – to a modest family of laborers of German descent who had settled years before on the border between Silesia and Moravia. At the time it belonged to the Austro-Hungarian Empire; today it is the Czech Republic. With the help of his family, some government subsidies, and by teaching private classes, Mendel completed his studies in regional high schools and universities with outstanding academic achievement.  Apparently, he wanted to be a professor, but in 1843, once he had completed his university studies, he joined a congregation of Augustinian monks at the abbey of Saint Thomas of Brünn – now Brno in the Czech Republic. There he became a priest in 1847 and conducted his experiments with pea plants in the second half of the 19th Century, publishing them in 1865-66, although they had practically no acceptance until they were rediscovered 35 years later.

As he had not previously shown any special interest in religion, it has been said that Mendel joined the monastery and embraced religious life in order to make up for his lack of economic means to continue his intellectual life. In fact, the monastery was then a great center that radiated culture and knowledge in the region. It also had a good library, fields of plants and animal husbandry, with major intellectual figures belonging to the abbey, etc. On the other hand, although his father wanted him to return to the family farm – an accident left him partially lame – so he was not up to the job, literally.

But there is a recent hypothesis in the sense that he finally decided to join the monastery to avoid the burden he had to bear in the previous years, replacing his father to complete the forced servitude to the owner of the land. He had to work several days per week on the ‘master’s’ land. In fact, according to this theory, this servitude could be the cause of a missing year in his university studies prior to joining the convent.  However, it is frequently said that this delay could have been due to the fact that Mendel was prone to depression, which could have occurred when the hardships accumulated. First, as we said, when he was in his final years of his university studies, then as an ordained priest when he failed several times to obtain the title of professor – as the pastoral or social work at a nearby hospital did not completely satisfy him. Also when to his dismay, he found that his laborious experiments with pea plants were barely recognized, and finally, when his difficulties mounted in running the monastery after being selected to be abbot in 1868. The latter may have hastened his death at the age of 61 in 1884.

The mysteries surrounding these aspects of his life remain, but what also remains is that whatever it was and despite everything, joining the monastery is surely what allowed him to design and carry out his experiments with pea plants and use his intelligence to start to make out the rules of inheritance.

WORK FULL OF MYSTERIES AND CONTROVERSIES

However, his 1866 article “Experiments on Plant Hybridization” mentions that he conducted them in order to attempt to clarify the possible role that the hybridization phenomenon could have on evolution. In fact, because he was a cleric, some authors have mentioned that Mendel carried out his experiments to refute Darwin’s theory on evolution. But Mendel did not defend this in this text or in any other place – his short autobiography, correspondence, notes in Darwin’s books, statements made to family members of acquaintances. If anything, he disputes some aspects with the distinguished Englishman, such as the possible role that the domestication and cultivation of plants and animals could have had in terms of accelerating the origin of new variants.

Nevertheless, it is important to mention that after Mendel’s experiments were rediscovered in the early 20th Century, after an initial stage in which the importance of Mendelian variations for evolution was downplayed. They were later accepted together with other quantitative variations, as the foundation of the evolutionary process since they were both materials on which natural selection acts.

Second, Mendel’s interpretation of his results related to inheritance and genetics has been extensively discussed. After carrying out his experiments, Mendel came up with an explanation that does not completely match that given to his experiments. In fact, Mendel proposed that some “dispositions” exist within the pea plants – anlagen – for which the different characteristics whose variations are passed on to offspring without mixing, and independently of each other. But he did not mention genes, alleles, homozygous, heterozygous or any of the concepts that were later associated with his experiments and his “laws”.  This was above all the work of one of the first to rediscover his work – Carl Correns – and of those who came immediately after, such as William Bateson, to whom genetics owes its name.

Another major controversy related to Mendel is the possibility that he “fixed” his results so that they would “follow” the rules that he was proposing. Therefore, shortly after his experiments were rediscovered, there was a series of authors – some who were very important in the history of genetics like Ronald Fisher – who mentioned how closely some of the results met expectations. They specifically mentioned that in the second generation of the monohybrid crosses (for example in crosses of a variety of pea plants with smooth seeds with another with rough seeds) the results Mendel obtained were too close to the expected proportion of three to one; three of the variety that had remained in the first generation – in the previously mentioned case, the smooth seeds and one of the varieties that had apparently disappeared – the rough seeds in this case.  In other words, they argued that it was “impossible” both statistically and experimentally to obtain such good results. And although Fisher did not directly accuse Mendel of fraud, he did accuse a certain “collaborator”. The issue was pending while the entire science of genetics was developed. But in the 1960s, when preparing for the 100th anniversary of the publication of Mendel’s work, the issue exploded, leading to what has been called the Mendel-Fisher controversy, which continues to exist even today. There are currently two positions on the matter: some continue to maintain that Mendel’s results are really possible, and according to others, it is something that will never have an answer as we do not have access to all of Mendel’s original data, so it is better to abandon this controversy.

The possibility that Mendel eliminated some experiments and results that did not follow the rules that he proposed has also been suggested. Specifically, this has been argued regarding the so-called third law of Mendel. This rule stipulates that the different “dispositions” according to Mendel, genes according to those who rediscovered it, which control the existing variation in different characters are inherited independently. Some of the dispositions-genes that Mendel studied were not inherited independently and he did not include these results in his publication. Here, what has been argued in Mendel’s favor is that other great scientists like Galileo and Newton did not take possible exceptions into account when publishing general laws of nature for the first time to avoid invalidating them in the beginning. And in all these cases, explanations for these “exceptions” have been later found, leaving the rules intact. And in the case of Mendel, these exceptions are explained as a consequence of the genes involved going on the same chromosome. Therefore, they are not inherited independently.

And then the final mystery is why, despite all of the problems mentioned above, that Mendel is considered the father of genetics and of the rules that he found in his experiments are known as the laws of Mendel. According to some, Mendel’s coming to the altar – to non-religious scientists, this could be due to the confrontation that took place between two of those who rediscovered him: Correns, who was mentioned above and Hugo de Vries for defending his priority in discovering the laws of inheritance, something that both were investigating. And as they did not agree, “they preferred” to attribute this priority to Mendel at a time when, as we mentioned above, serious debate was taking place regarding the value of Mendelian variations for evolution. Therefore, they did not consider themselves to be immersed in the controversy. 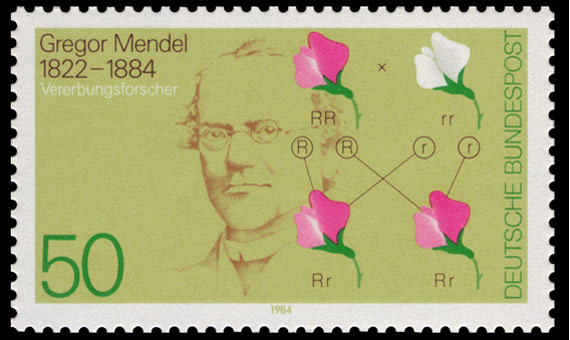 But after so many “problemsc”, what remains is that Mendel was a great paradigmatic scientist, perhaps the first in biology. And although he was not initially trying to solve the inheritance problem, his careful experiments started to lay out the rules of this phenomenon. He was “lucky” that they were eventually rediscovered, interpreted and later confirmed by a new science: genetics.

The Hunt for Shooting Stars