1968: a Social Revolution, but Also Scientific and Technological

Margaret Hamilton and the Arrival to the Moon

Urban areas inhale pure air and exhale polluted air. They eat, devour, and expulse debris. They need energy to exist, to transport people and supplies, to protect us from the harshness of climate, or to illuminate the night.

Their metabolism requires the consumption of goods that are becoming harder to obtain: energy, water, materials… and their dependence on increasingly remote places grows because the immediate surrounding rural area is generally not enough to generate the necessary supplies. Our foods are produced hundreds of kilometers from where they are eaten, our work tools and consumer goods are likely to have travelled from Asia, as the products created by our industry will travel toward their destination and, although the parallel flow of intangible riches is on the rise (information, knowledge, services), the transport of tangible goods will always be vital.

And so cities are the extremities of the tight transports and logistics web that we have built, while they are at the same time the central nodes of the most generic process that our socio-economic system carries out on the physical level: 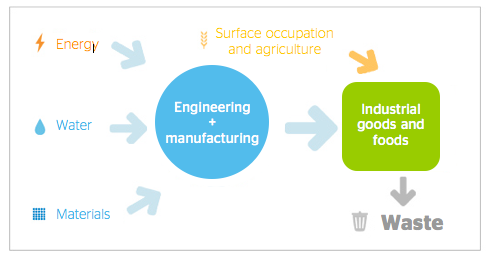 The previous entry I focused on quantifying the urban growth forecast for the coming decades, and visualizing what all this would mean in terms of ground occupation, depending on the urban model used as paradigm with regard to the urban density factor.

In any case, the impact of cities is not limited to the mere occupation of land space, what happens when a person moves from the countryside to the city?

First, he or she generally goes from having a certain nutritional self-sufficiency to becoming a dependent citizen, whose most basic goods: water, food, and energy, have to be generated far away and transported to him or her.

Secondly, his or her consumption levels are raised, given that in addition to the general economic prosperity the subject gains, he or she becomes a user of communal infrastructures that in themselves require high consumption. We therefore see how there is an unfavorable disproportion between the demographic weight of cities and their participation in global consumption. 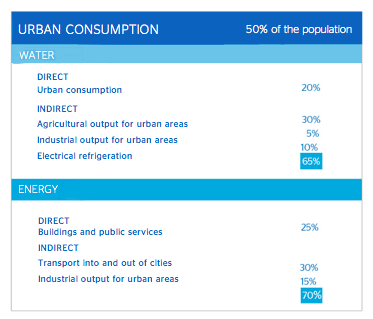 At this point it should be noted that our system is maintained because, once the resources that our planet regenerates each year are consumed, we use the stock accumulated in the past millions of years: non-renewable energy, the decrease of biodiversity, the increasing scarcity of some minerals, or the “fossil water” extracted from aquifers at great depths, overexploited beyond their replenishment levels, are good examples of how from year to year we gradually replenish our primary goods materials, given that we would need 1.6 planets for our global demand to correspond to the Earth’s regeneration capacity.

How to mitigate the impact of our cities on the environment by improving urban metabolism is the question addressed by initiatives that have come to be known collectively as the broad concept of intelligent cities whose objective is to achieve more with less, optimize urban cycles and eliminate superfluous consumption while maintaining or increasing the citizens’ quality of life.

To this end a number of new design and management requirements are being proposed, using tools that combine engineering and urban science.

The aim is not to increase technology within the city and make a mere display of unjustified technologies, but rather to address clear environmental objectives, taking advantage of opportunities that are within our reach.

Let’s keep in mind that, should they come to pass, future scenarios of energy scarcity and the need to reduce greenhouse effect gases will deprive us of any choice in the matter: efficiency will go from being optional to necessary, and so will the group of measures that transform a city as we know it today into an “intelligent city”.

Having said that, can we imagine Lagos, Nairobi, Manila, or Jakarta as intelligent cities? I understand all too well, and even share, the skepticism among some of the readers. Clearly the very low impact standards used in the design of, for instance, the brand new city of Masdar are not generally applicable due to their high economic cost, which indicates that the technology is still not ready, but will be.

Without doubt, in more economically challenged areas the priority will continue to be the management of urban expansion so that it does not exceed capacity for reaction and integration, and the greatest challenge there will be for a long time is the maintenance of a minimum level of basic services and waste management (let us remember the millennium objectives yet to be achieved: the one billion people still without access to drinking water, or the 2 billion people that don’t use sewerage networks, for instance). In those countries, before thinking of ultra-sophisticated elements, it will be necessary to achieve minimum levels of sanitation based on classic urban engineering.

In any case, all that which is learned in the more developed economies may serve to create new paradigms after the best tools have been selected in each area. The rise in the price of basic resources will help the required investment costs to be considered affordable if significant savings in basic resources such as water and energy are achieved, which will mean that relative greater efficiency is achieved and that these solutions are replicable in the developing world.

To sum up, with these two articles I would like to have conveyed four ideas:

1) A growing population faced with finite resources must direct all possible efforts to increasing its efficiency in order to ensure its long-term survival.

2) A compact city is much more sustainable than a widely spread one, and furthermore this high density contributes to easier application of efficiency measures.

3) Urban growth in the third world must be carried out in an orderly manner, for which efficient local governments are necessary, that plan and manage urban expansion.

4) It is the responsibility of the more developed economies to invest in research, innovation, and development so that the tools for the improvement of urban cycles are available at reasonable costs in all countries.

The Man Who Saved the Most Lives