Patrik Wikström on the digital transformation of the Music Industry

The Urban Footprint – Part I

Cities are living organisms, social beings comprising a sum of individuals in continuous interrelation; they constitute one of the most complex systems created by man from an intangible standpoint, and on this plane they are a backdrop for the most intense of human interactions (financial, cultural, legal). But at the same time, they are articulated on the physical plane through a series of networks of infrastructures designed to satisfy our material requirements.

On both these planes, today’s human termite mounds have multiplied their complexity compared to the cities of the past, and precisely for this reason their fragility has also increased.

On the other hand, the city is also the main definer of civilization. Everything happens and everything emerges in cities: scientific and technical discoveries, art, productive innovation… all the processes that are based on complex networks of relationships in permanent communication and mutual enrichment such as universities, forums for debate, congress venues etc. In its most positive aspect, large cities are the optimum culture medium for the creative classes in any society, and yet at the same time they also represent a black hole that swallows up young people from the provinces and the surrounding rural areas. It is in this setting where subsistence takes place in a greater equilibrium with the environment, and often with higher rates of quality of life, something that can still be achieved in spite of the influx of immigrants. Thus the city is a fountain that pours forth new ideas, a place of opportunities, but −on the down side− it is also an agglomeration of masses that have to be fed and maintained with assistance and at the expense of the environment.

Looking into the near future we can see how far cities are set to grow:

▫    In the short term, the United Nations forecasts that the number of large conurbations with over 10 million inhabitants will rise from 23 to 37, and not only will their number increase, but also their average size.

▫   In the medium term the urban population will double, rising in little over one generation from 3,500 million people today (50% of the total) to almost 7,000 million (75% of the total). These are dimensions which are difficult to assimilate.

This growth in population will take place above all −and this is crucial− in the developing world. In order to tackle the “explosion of the P-bomb” today’s cities will have to expand in all directions -including upwards-, carefully managing a key variable, namely urban density.

In the section entitled Densities in my personal blog, I have compiled information on the broad spectrum of compactness to be found in human settlements, to the most extreme limits such as the situation in certain slums in Bangladesh, India and Africa, some of which have densities of over 100,000 people per sq. km -almost unbelievable if we consider that the buildings there are rarely more than three or four stories high.

At the other extreme, the low densities in many North American suburbs are equally alarming -often barely 1,000 people per sq. km – which makes supplying urban services unsustainable and also means it is unviable to implement an adequate system of public transport or an efficient garbage collection system.

I refer to these examples because I always like to illustrate these astronomical figures with cases that can give us a better idea of what they actually involve. To do so we need to try to answer some basic questions:

How much do our cities occupy today? How much non-urban land do they have at their service? What are the limits of growth if we want to preserve a sufficient amount of unspoilt land as a biosphere reserve?

Let’s start by imagining the urban population all huddled together, those 3,500 million people, in a single city with the density of Manhattan or Benidorm. We can see that this single megacity would occupy today a little less than the area of Andalusia, and even if it were to double in size by 2050, it would still account for a low percentage of the total available area. 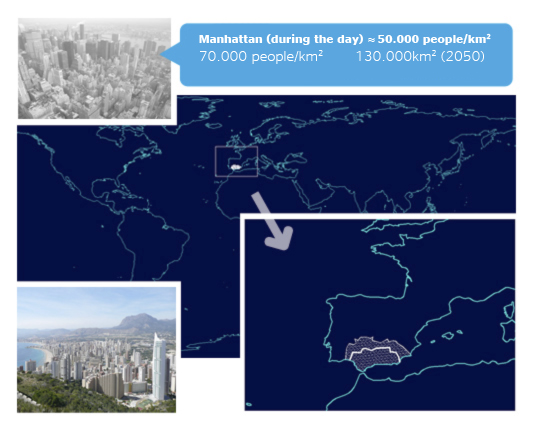 If, on the other hand, we perform this exercise taking a lower density like Buenos Aires, we would have a case where this single megacity would today spread over half of the Iberian Peninsula, and cover practically all of it by 2050. 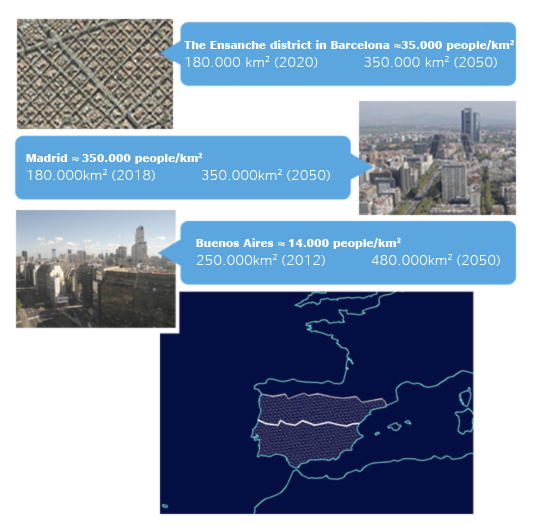 But in order to determine what area our cities really cover we have to move from hypothesis into reality. According to the FAO in one of its latest reports on the state of land resources, some 1.52 million km² are currently under development, an area equivalent to countries such as Mongolia or Iran. This represents 1.17% of the 130 million km² of above-water land on Earth (not counting Greenland and the Antarctic). Thus the real average density of the cities in the world would stand at around 2,300 people per sq. km, corresponding to a highly scattered system of urbanization which is very wasteful of land, and substantially lower than that of the compact cities that we have used in our previous hypotheses.

If this figure doubles by 2050, as this pattern predicts, we will have an area of some 3 million km² under urban development, equivalent to the area of Argentina or India.

This same breakdown also reveals how each hectare of urban land has at its service 10 hectares of cultivated land, in spite of the fact that thanks to the so-called Green Revolution, the ratio of cultivated land per person has gone from 0.45 ha/hab to 0.22 ha/hab in the last 50 years.

In short, it is well known that the quantification of humanity’s global footprint is equivalent to 1.6 planets. What proportion corresponds to cities? What path can be taken to reduce our global impact by intervening in our urban metabolism and improving it? We will attempt to address this issue in a forthcoming article.