How Software is Eating the World and Reprogramming Democracy

What happens in a State when it becomes a member of the European Union? Member States, as Christopher Bickerton explains in his article, are characterized by a growing distance between governments and their own societies. Current European policies have intensified technocracy and favored the growth of populism. The gap between political elites and their own societies is becoming wider.

Although it may seem paradoxical, integrating the democracy of the member states within the democracy of the European Union itself does not always lead to a better function of the democratic process. In her article, Vivien Ann Schmidt explores the challenge to democracy posed by European integration, and asks what to do to ensure that both levels of democracy interact in a more productive way.

An active democratic system is an essential requirement for new countries to join the European Union. A vibrant civil society is perceived as evidence of democracy and good governance at work. In this chapter, Nieves Pérez-Solórzano analyzes the transformative role of the union through the lens of its strategy to promote civil society in candidate countries for membership of the EU,  and asks how the enlargement policy has changed after the crisis?

The concept of the welfare state differs throughout Europe, but there is no doubt that it is a great achievement for all economies, as it is essential for the creation of a habitable society and an efficient state, as Kees Van Kersbergen explains in his article. The welfare state is caught between the demographic and economic challenges of the day, and therefore Europe must find new ways to guarantee social protection while promoting sustainable economic growth. 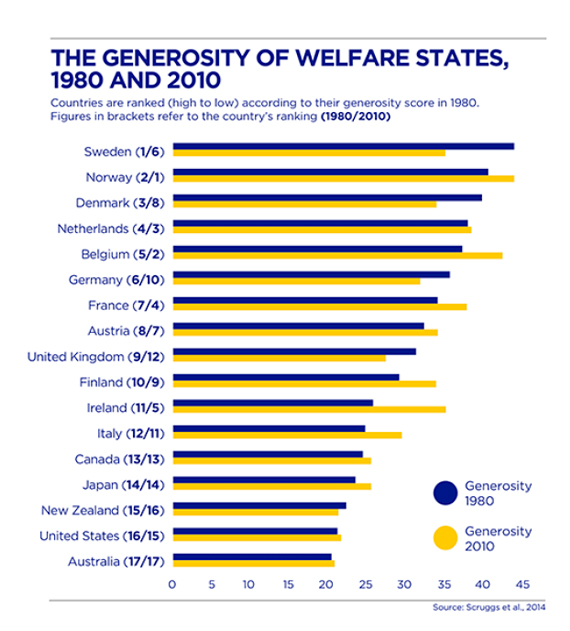 Coordinating and integrating higher education in Europe is a complex process that requires efforts in several directions. The political initiatives include the Erasmus mobility program or the European Higher Education Area. In his article, Robin Shields analyzes how, from an international viewpoint, the priority for the EU has so far been to build and maintain European higher education in relation to increased competition from North America and East Asia.

25 million Muslims live in the 28 EU member states. Religion is therefore not a minority issue in terms of European society. The 1980s saw a change in the perception of immigration from countries such as Morocco or Pakistan: they cease to be seen as Moroccan or Pakistani immigrants, but Muslims who “threaten the social fabric of European societies”. For Bichara Khader, it is essential for immigrants to make an effort to integrate and for societies to show openness in order to prevent today’s tensions increasing, as he explains in his article.

What does it mean to feel European? Is there a European culture? In this article Julia Kristeva analyzes the history, challenges and potential of the feeling of belonging to Europe: an entity defined by multilingualism and which is also undergoing an existential crisis, shaken by the financial downturn that has called into question its image as a great power. However, are we now seeing the emergence of a European “us”?

Forbidden to Go Around the Sun