Towards a New Photovoltaic Paradigm: The Silicon-Perovskite Tandem

Connecting our Brain to Machines: the Final Barrier?

Ten Trends of Blockchain in 2020

It’s clear that blockchain will revolutionize operations and processes in many industries and governments agencies if adopted, but its adoption requires time and efforts, in addition blockchain technology will stimulate people to acquire new skills, traditional business will have to completely reconsider their processes to harvest the maximum benefits from using this promising technology [2].

The following 10 trends will dominate blockchain technology in 2020: 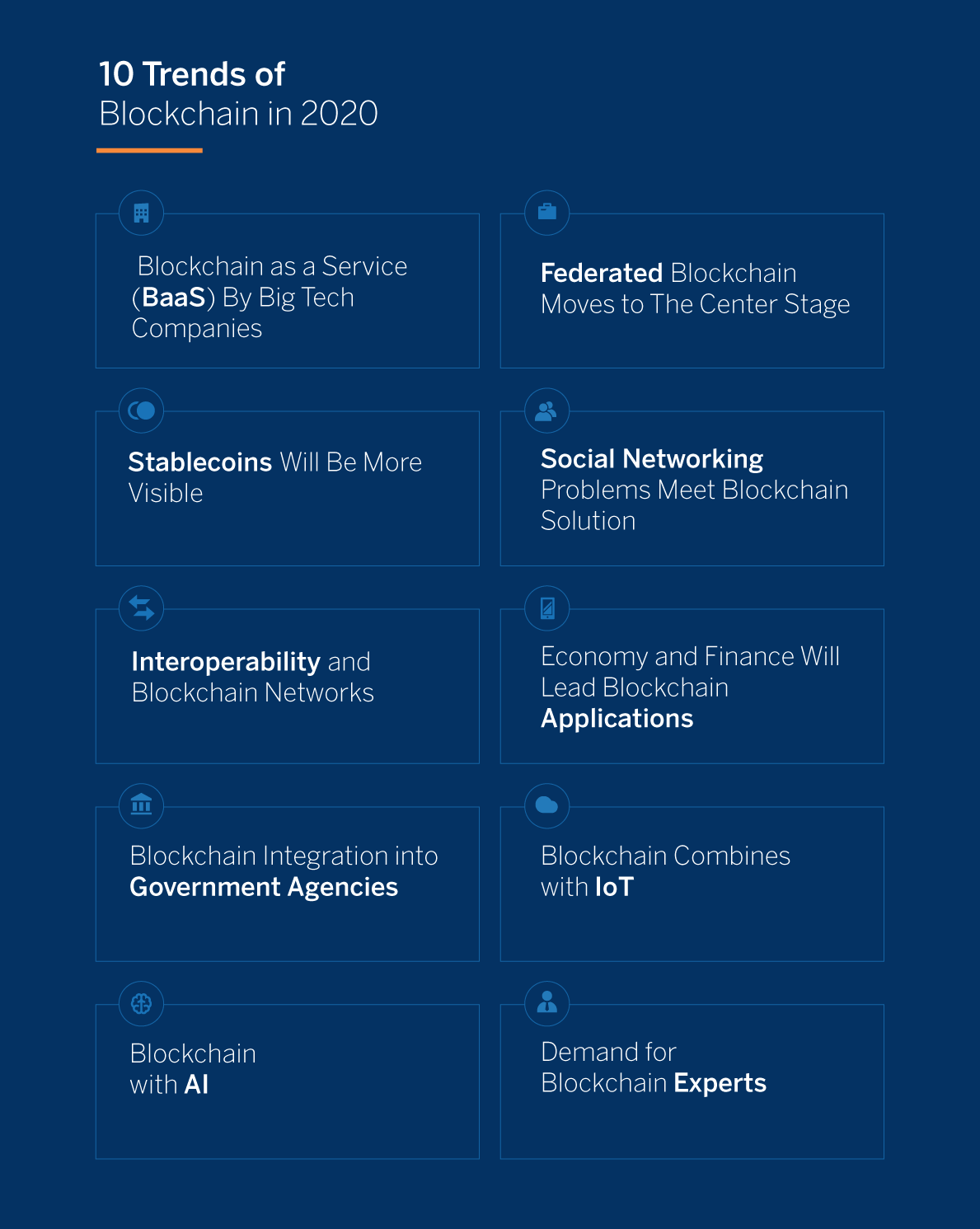 1. Blockchain as a Service (BaaS) By Big Tech Companies

One of the promising blockchain trends in 2020 is BaaS, short for Blockchain As A Service. It is a new blockchain trend that is currently integrated with a number of startups as well as enterprises. BaaS is a cloud-based service that enables users to develop their own digital products by working with blockchain. These digital products may be smart contracts, decentralized applications (Dapps), or even other services that can work without any setup requirements of the complete blockchain-based infrastructure.

Some of the companies developing a blockchain that provide BaaS service are Microsoft and Amazon, consequently shaping the future of blockchain applications [1].

Blockchain networks can be classified as: Private, Public, Federated or Hybrid. The term Federated Blockchain can be referred to as one of the best blockchain latest trends in the industry. It is merely an upgraded form of the basic blockchain model, which makes it more ideal for many specific use cases. In this type of blockchain, instead of one organization, multiple authorities can control the pre-selected nodes of blockchain. Now, this selected group of various nodes will validate the block so that the transactions can be processed further. In 2020, there will be a rise in the usage of federated blockchain as it provides private blockchain networks, a more customizable outlook [1].

3. Stablecoins Will Be More Visible

Using Bitcoin as an example of cryptocurrencies its highly volatile in nature. To avoid that volatility stablecoin came to the picture strongly with stable value associate with each coin. As of now, stablecoins are in their initial phase and it is predicted that 2020 will be the year when blockchain stablecoins will achieve their all-time high [1].

One driving force for using stablecoin is the introduction of Facebook’s cryptocurrency “Libra” in 2020 even with all the challenges facing this new cryptocurrency proposed by Facebook and the shrinking circle of partners in libra.org [4].

There are around 2.77 Billion social media users around the globe in 2019.

The introduction of blockchain in social media will be able to solve the problems related to notorious scandals, privacy violations, data control, and content relevance. Therefore, the blockchain blend in the social media domain is another emerging technology trend in 2020. 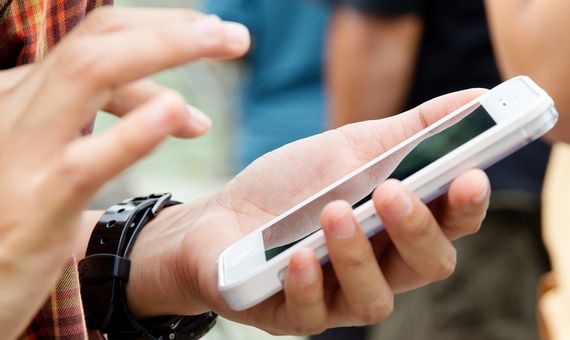 With the implementation of blockchain, it can be ensured that all the social media published data remain untraceable and cannot be duplicated, even after its deletion. Moreover, users will get to store data more securely and maintain their ownership. Blockchain also ensures that the power of content relevance lies in the hands of those who created it, instead of the platform owners. This makes the user feel more secure as they can control what they want to see. One daunting task is to convince social media platforms to implemented it, this can be on a voluntary base or as a results of privacy laws similar to GDPR [1].

Unlike other traditional businesses, the banking and finance industries don’t need to introduce radical transformation to their processes for adopting blockchain technology. After it was successfully applied for the cryptocurrency, financial institutions begin seriously considering blockchain adoption for traditional banking operations.

PWC report, 77 percent of financial institutions are expected to adopt blockchain technology as part of an in-production system or process by 2020.

Blockchain technology will allow banks to reduce excessive bureaucracy, conduct faster transactions at lower costs, and improve its secrecy. One of the blockchain predictions made by Gartner is that the banking industry will derive 1 billion dollars of business value from the use of blockchain-based cryptocurrencies by 2020.

The idea of the distributed ledger is also very attractive to government authorities that have to administrate very large quantities of data. Currently, each agency has its separate database, so they have to constantly require information about residents from each other. However, the implementation of blockchain technologies for effective data management will improve the functioning of such agencies.

According to Gartner, by 2022, more than a billion people will have some data about them stored on a blockchain, but they may not be aware of it. Also, national cryptocurrencies will appear, it’s inevitable that governments will have to recognize the benefits of blockchain-derived currencies. Digital money is the future and nothing will stop [3].

The IoT tech market will see a renewed focus on security as complex safety challenges crop up. These complexities stem from the diverse and distributed nature of the technology. The number of Internet-connected devices has breached the 26 billion mark. Device and IoT network hacking will become commonplace in 2020. It is up to network operators to stop intruders from doing their business.

Blockchain offers new hope for IoT security for several reasons. First, blockchain is public, everyone participating in the network of nodes of the blockchain network can see the blocks and the transactions stored and approves them, although users can still have private keys to control transactions. Second, blockchain is decentralized, so there is no single authority that can approve the transactions eliminating Single Point of Failure (SPOF) weakness. Third and most importantly, it’s secure—the database can only be extended and previous records cannot be changed [7].

Many IoT based companies adopts blockchain technology for their business solutions. The International Data Corporation (IDC) is expecting that 20 percent of IoT deployments will enable blockchain services by 2020 [3].

The International Data Corporation (IDC) suggests that global spending on AI will reach $57.6 billion by 2020 and 51% of businesses will be making the transition to AI with blockchain integration.

Moreover, AI can boost blockchain efficiency far better than humans, or even standard computing can. A look at the way in which blockchains are currently run on standard computers proves this with a lot of processing power needed to perform even basic tasks. 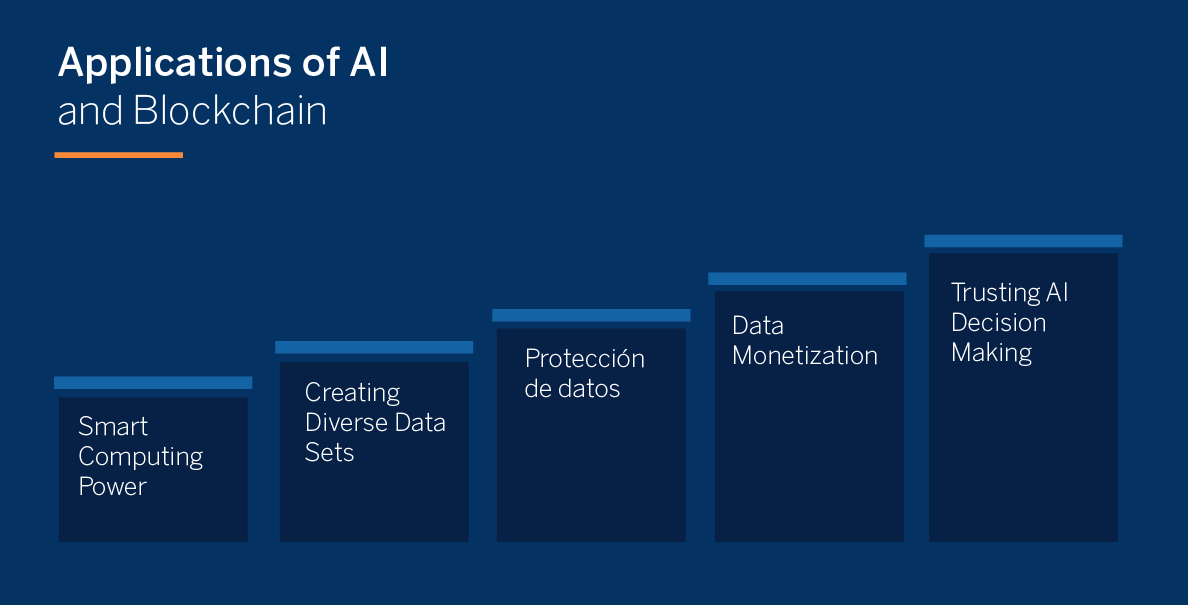 Even though the number of experts in blockchain fields is increasing, on the other hand the implementation of this technology has a rapid growth which will create a situation for the demand of Blockchain experts by 2020. [3]

It’s worth saying that there are genuine efforts by universities and colleges to catch up with this need, but the rate of graduating students with enough skills to deal with blockchain technology is not enough to fill the gap. Also, Companies are taking steps to build on their existing talents by adding training programs for developing and managing blockchain networks.