Ten Trends of Internet of Things in 2020

The Internet of Things (IoT) is actively shaping both the industrial and consumer worlds. Smart tech finds its way to every business and consumer domain there is—from retail to healthcare, from finances to logistics—and a missed opportunity strategically employed by a competitor can easily qualify as a long-term failure for companies who don’t innovate [3]. The year 2020 will hit all 4 components of IoT Model: Sensors, Networks (Communications), Analytics (Cloud), and Applications, with different degrees of impact.

By 2020, the Internet of Things (IoT) is predicted to generate an additional $344B in revenues, as well as to drive $177B in cost reductions. IoT and smart devices are already increasing the performance metrics of major US-based factories. They are in the hands of employees, covering routine management issues and boosting their productivity by 40-60% [1]. The following 10 trends explore the impact of many technologies on IoT and predict what is next for IoT . 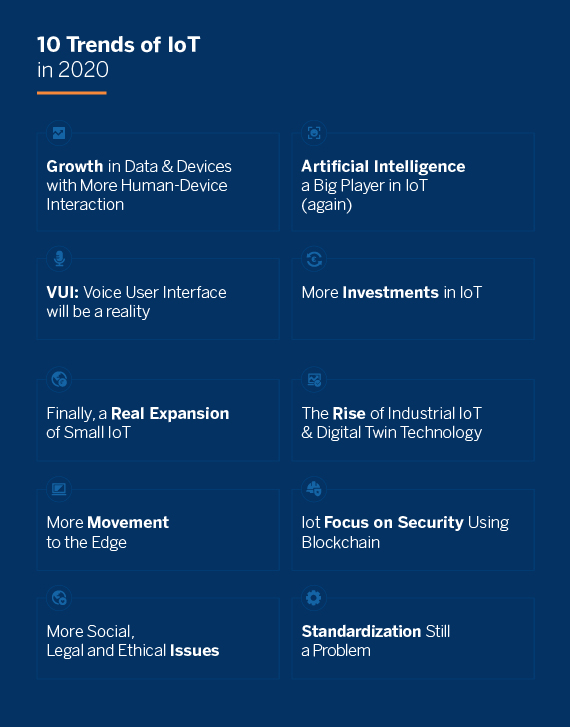 Trend 1: Growth in Data and Devices with More Human-Device Interaction

By the end of 2019, there will be are around 3.6 billion devices that are actively connected to the Internet and used for daily tasks. With the introduction of 5G that will open the door for more devices, and data traffic. You can add to this trend the increase adoption of edge computing which will make it easier for business to process data faster and close to the points of action [1].

Making the most of data, and even understanding on a basic level how modern infrastructure functions, requires computer assistance through artificial intelligence. The major cloud vendors, including Amazon, Microsoft, and Google, are increasingly looking to compete based on their AI capabilities. Various startups hope to increase their market share through AI algorithms able to leverage machine learning and deep learning, allowing businesses to extract more value out of their ever-growing volumes of data [2].

Artificial intelligence is the fundamental ingredient needed to make sense of the vast amount of data collected these days, and increase its value for the business. AI will help IoT data analysis in the following areas: data preparation, data discovery, visualization of streaming data, time series accuracy of data, predictive and advance analytics, and real-time geospatial and location (logistical data) [1].

Trend 3: VUI: Voice User Interface will be a Reality

It’s a battle among industry leaders who would like to dominate the market of IoT at an early stage. Digital assistant devices, including HomePod, Alexa, Siri, and Google Assistant, are the future hubs for the next phase of smart devices, and companies are trying to establish “their hubs” with consumers, to make it easier for them to keep adding devices with less struggle and no frustrations [1].

Voice represents 80% of our daily communications, taking a chapter from Sci-Fi movies, talking to robots is the common way of communications, R2D2, C-3PO, and Jarvis to name a few. The use of voice in setting up the devices, change that setups, giving commands and receiving results will be the norm not only in smart houses, factories but in between like cars, wearables for example.

IoT’s undisputable impact has and will continue to lure more startup venture capitalists towards highly innovative projects in hardware, software, and services. Spending on IoT will hit 1.4 trillion dollars by 2021.

IoT is one of the few markets that have the interest of the emerging as well as the traditional venture capitalists. The spread of smart devices and the increasing dependency of customers to do many of their daily tasks using them will add to the excitement of investing in IoT startups. Customers will be waiting for the next big innovation in IoT—such as smart mirrors that will analysis your face and call your doctor if you look sick, smart ATM machine that will incorporate smart security cameras, smart forks that will tell you how to eat and what to eat, and smart beds that will turn off the lights when everyone is sleeping [1].

IoT is all about connectivity and processing, nothing will be a better example than smart cities, but smart cities have been in a bit of a holding pattern recently. Smart sensors around the neighborhood will record everything from walking routes, shared car use, building occupancy, sewage flow, and temperature choice 24/7 with the goal of creating a place that’s comfortable, convenient, safe, and clean for those who live there. Once the model is perfected, it could be the model for other smart neighborhoods and eventually smart cities [1].

The potential benefits for cities, however, make IoT technology especially compelling. Cities of all sizes are exploring how IoT can lead to better efficiency and safety, and this infrastructure is increasingly being rolled around the world. Transportation will likely lead this change, as bringing connectivity, intelligence and automation to roads and public transportation has proven to significantly improve efficiency and experience. One factor expected to play a role in smart city development will be 5G, making the lightning-fast transfer of streaming analytics more realistic. 5G rollouts will spur a race to build applications that tap into the numerous market opportunities it creates [2].

Another area of spreading smart IoT is the auto industry with self-driving cars become a normal occurrence in the next few years, today tons of vehicles have a connected app that shows up to date diagnostic information about the car. This is done with IoT technology, which is the heart of the connected vehicle. Diagnostic information is not the only IoT advancement that we will see in the next year or so. Connected apps, voice search, and current traffic information are a few other things that will change the way we drive [1].

An amalgamation of technologies is pushing this new techno-industrial revolution, and IoT plays a big part in making manufacturing more efficient, less risky, and more profitable. Industrial IoT brings enhanced efficiency and productivity through data integration and analysis in a way that isn’t possible without an interconnected manufacturing process.

Another notion that is gaining popularity is “digital twin” technology. Through its use, organizations can create a clear picture of how their IoT devices are interacting with the manufacturing process. This gives keen businesses insight into how the life cycle of their machines operates and allows them to predict changes that may be needed ahead of time. According to a Gartner survey, 48% of smart manufacturing adopters have made plans to make use of the digital twin concept [3].

Trend 7: More Movement to the Edge

Edge computing is a technology that distributes the load of processing and moved it closer to the edge of the network (sensors in case of IoT). The benefits of using fog computing are very attractive to IoT solution providers. Some of these benefits allow users to minimize latency, conserve network bandwidth, operate reliably with quick decisions, collect and secure a wide range of data, and move data to the best place for processing with better analysis and insights of local data[1]. Edge computing has been on the rise in recent years, but the growing scope of IoT technology will make this move even more pronounced. Two factors are leading this change:

Edge computing also makes on-device AI a realistic proposition, as it allows companies to leverage real-time data sets instead of having to sift through terabytes of data in a centralized cloud in real-time. Over the coming years and even decades, it’s likely that tech will shift to a balance between the cloud and more distributed, edge-powered devices [2].

Hardware manufacturers are building specific infrastructure for the edge deigned to be more physically rugged and secure, and security vendors will start to offer endpoint security solutions to their existing services to prevent data loss, give insights into network health and threat protection, include privileged user control and application whitelisting and control, that will help in the fast adoption and spread of edge computing implementations by businesses [1].

The IoT tech market will see a renewed focus on security as complex safety challenges crop up. These complexities stem from the diverse and distributed nature of the technology. The number of Internet-connected devices has breached the 26 billion mark. Device and IoT network hacking will become commonplace in 2020. It is up to network operators to stop intruders from doing their business [4].

Blockchain offers new hope for IoT security for several reasons. First, blockchain is public, everyone participating in the network of nodes of the blockchain network can see the blocks and the transactions stored and approves them, although users can still have private keys to control transactions. Second, blockchain is decentralized, so there is no single authority that can approve the transactions eliminating Single Point of Failure (SPOF) weakness. Third and most importantly, it’s secure—the database can only be extended and previous records cannot be changed.

In the coming years, manufacturers will recognize the benefits of having blockchain technology embedded in all devices and compete for labels like “Blockchain Certified” [1].

IoT devices represent a largely unregulated new technology. IoT will inevitably find itself facing social and legal questions in the near future. This is particularly relevant for data collected by these devices, which may soon find itself falling under the umbrella of the General Data Protection Regulation (GDPR). This regulation regarding the handling of personal data and privacy in the European Union, the GDPR extends its reach beyond the European region. Any business that wants to successfully operate within the EU will need to comply with the guidelines laid out in its 88-page document. Security issues are essential when it comes to the legal regulation of personal data. Development teams can ensure the required level of security and compliance on various levels, including data encryption, active consent, various means of verification and other mechanisms. Their goal is to collect data legitimately and keep its accessibility, processing, and storage to a minimum that is dictated by the software product [3].

Standardization is one of the biggest challenges facing the growth of IoT—it’s a battle among industry leaders who would like to dominate the market of IoT at an early stage. But what we have now is a case of fragmentation. One possible solution is to have a limited number of vendors dominating the market, allowing customers to select one and stick to it for any additional connected devices, similar to the case of operating systems we have now have with Windows, Mac, and Linux for example, where there are no cross-platform standards.

To understand the difficulty of standardization, we need to deal with all three categories in the standardization process: Platform, Connectivity, and Applications. In the case of the platform, we deal with UX/UI and analytic tools, while connectivity deals with customer’s contact points with devices, and last, applications are the home of the applications which control, collect and analyze data. All three categories are inter-related and we need them all, missing one will break that model and stall the standardization process. There is no way to solve the problem of fragmentation without a strong push by organizations like IEEE or government regulations to have common standards for IoT devices [1].

Digital World
What is a Data Lake?
Innovation
Technology Under Your Skin: 3 Challenges of Microchip Implants
Digital World
Quantum Computing and AI: A Transformational Match

Sandra Magro
Start Ten Trends of Internet of Things in 2020