Descartes and the Rebirth of Geometry

Why Does the Rainbow have 7 Colors?

Color as a physical concept

Visible light, heat, radio waves and other types of radiation all have the same physical nature and are constituted by a flow of particles called photons. The photon or “light quantum” was proposed by Einstein, for which he was awarded the Nobel Prize in 1921 and is one of the elementary particles of the standard model, belonging to the boson family. The fundamental characteristic of a photon is its capacity to transfer energy in quantized form, which is determined by its frequency, according to the expression E=h∙n, where h is the Planck constant and n the frequency of the photon.

Thus, we can find photons of very low frequencies located in the band of radio waves, to photons of very high energy called gamma rays, as shown in the following figure, forming a continuous frequency range that constitutes the electromagnetic spectrum. Since the photon can be modeled as a sinusoid traveling at the speed of light c, the length of a complete cycle is called the photon wavelength l, so the photon can be characterized either by its frequency or its wavelength, since l=c/n. But it is common to use the term color as a synonym for frequency, since the color of light perceived by humans is a function of frequency. However, as we are going to see, this is not strictly physical but a consequence of the process of measuring and interpreting information, which makes color an emerging reality of another underlying reality, sustained by the physical reality of electromagnetic radiation.

But before addressing this issue, it should be considered that to detect photons efficiently it is necessary to have a detector called an antenna, whose size must be similar to the wavelength of the photons.

The human eye is sensitive to wavelengths ranging from deep red (700nm, nanometers=10-9 meters) to violet (400nm).  This requires receiving antennas of the order of hundreds of nanometres in size! But for nature this is not a big problem, as complex molecules can easily be this size. In fact, the human eye, for color vision, is endowed with three types of photoreceptor proteins, which produce a response as shown in the following figure. 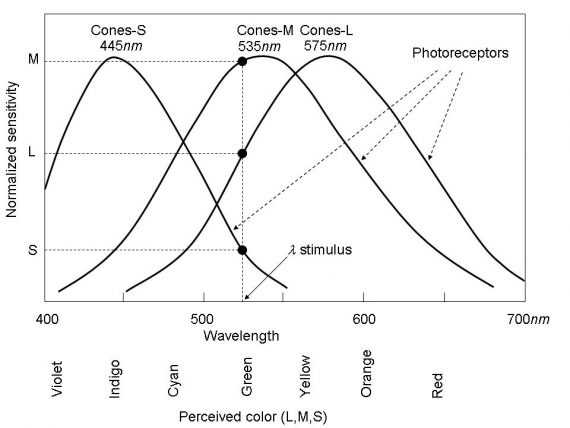 Response of photoreceptor cells of the human retina / Image: author

Each of these types configures a type of photoreceptor cell in the retina, which due to its morphology are called cones. The photoreceptor proteins are located in the cell membrane, so that when they absorb a photon they change shape, opening up channels in the cell membrane that generate a flow of ions. After a complex biochemical process, a flow of nerve impulses is produced that is preprocessed by several layers of neurons in the retina that finally reach the visual cortex through the optic nerve, where the information is finally processed.

But in this context, the point is that the retinal cells do not measure the wavelength of the photons of the stimulus. On the contrary, what they do is convert a stimulus of a certain wavelength into three parameters called L, M, S, which are the response of each of the types of photoreceptor cells to the stimulus. This has very interesting implications that need to be analyzed. In this way, we can explain aspects such as:

To understand this, let us imagine that they provide us with the response of a measurement system that relates L, M, S to the wavelength and ask us to establish a correlation between them. The first thing we can see is that there are 7 different zones in the wavelength, 3 ridges and 4 valleys. 7 patterns! This explains why we perceive the rainbow composed of 7 colors, an emerging reality as a result of information processing that transcends physical reality.

But what answer will a bird give us if we ask it about the number of colors of the rainbow? Possibly, though unlikely, it will tell us nine! This is because the birds have a fourth type of photoreceptor positioned in the ultraviolet, so the perception system will establish 9 regions in the light perception band. And this leads us to ask: What will be the chromatic range perceived by our hypothetical bird, or by species that only have a single type of photoreceptor? The result is a simple case of combinatorial!

Similarly, it is possible to synthesize color by subtractive or pigmentary mixing of three colors, magenta, cyan and yellow, as in oil paint or printers. And this is where the virtuality of color is clearly shown, since there are no magenta photons, since this stimulus is a mixture of blue and red photons. The same happens with the white color, as there are no individual photons that produce this stimulus, since white is the perception of a mixture of photons distributed in the visible band, and in particular by the mixture of red, green and blue photons.

In short, the perception of color is a clear example of how reality emerges as a result of information processing. Thus, we can see how a given interpretation of the physical information of the visible electromagnetic spectrum produces an emerging reality, based a much more complex underlying reality.

In this sense, we could ask ourselves what an android with a precise wavelength measurement system would think of the images we synthesize in painting or on video screens. It would surely answer that they do not correspond to the original images, something that for us is practically imperceptible. And this connects with a subject, which may seem unrelated, as is the concept of beauty and aesthetics. The truth is that when we are not able to establish patterns or categories in the information we perceive it as noise or disorder.  Something unpleasant or unsightly!

Beliefs
What is the Nature of Information?

Ventana al Conocimiento (Knowledge Window)
Start Why Does the Rainbow have 7 Colors?