Which Colors do People with Color Blindness Confuse?

The Inexhaustible Wealth of Volcanoes

The Eternal Sound: From the Phonograph to Holophony

Planting trees is not going to solve the problem of climate change. This is not to say that there aren’t other reasons to do so. Nor are forests the lungs of the earth, as is often said. This doesn’t mean there aren’t powerful reasons to conserve them. Nor do plants purify the air, as people sometimes claim. But this doesn’t mean that they don’t provide other benefits. There are myths about what plants can and cannot do, but there is no doubt that their space is not limited to the natural world, but should be in our world too: they are an essential part of more sustainable cities and healthier indoor environments, and will increasingly become so.

Forests still cover almost a third of the global land area and half of them are relatively intact, untouched by human hands. According to UN figures, there is still about 5,000 m2 of forest per person, which is astonishing considering that we destroyed more than a fifth of it in the last century, and since 1990 some 420 million hectares, more than eight times the size of Spain. Forests are home to the greatest biodiversity on the planet and are essential regulators of the earth’s climate. However, experts warn against the popular notion that they are the “lungs of the planet”: in reality, natural ecosystems consume as much oxygen as they produce, so their net production is practically zero; we breathe the oxygen inherited from the Earth’s ancient history.

Forests help to regulate climate largely through their ability to store immense amounts of carbon, which would otherwise be released into the atmosphere as CO2, exacerbating the greenhouse effect responsible for climate change. This is why planting trees has become one of the most fashionable practices of the moment, with more than a few companies claiming to “offset their emissions”. However, scientists have made it clear that this is generally just greenwashing, that planting trees will not stop climate change, and that the only way to avoid the effect of emissions is to reduce or eliminate them.

But if there is one type of place where planting trees has a special role and meaning, it is in cities. According to the US Environmental Protection Agency, a large tree is 10 to 20 times more beneficial in a city than in the countryside. The planet’s urban population is growing steadily; it is estimated that it will more than double from 3 billion people to 6.4 billion between 2000 and 2050. By 2030, urban sprawl over biodiversity hotspots will expand by 200%. And if the cities of the future are to avoid resembling the dystopian Los Angeles of Blade Runner, nature must be allowed to flourish

“I do not think many designers or planners exist that would lobby against the presence of street trees,” wrote architect Tyler Caine. There is now a big push by agencies and governments to make cities greener: many of their mayors have expressed support for international initiatives that include this goal, and in 2021 a total of 31 major cities around the world—including Barcelona in Spain—signed an agreement aimed at having 30-40% of built-up city surface consisting of green spaces.

The upsides of having green spaces in cities go far beyond simple aesthetic enjoyment, relaxation or recreation. According to environmental botanists Jessica Turner-Skoff and Nicole Cavender, “the benefits that trees provide can help cities and countries meet 15 of the 17 internationally supported United Nations Sustainable Development Goals.” The World Economic Forum (WEF) summarises the five main environmental, social, economic, biodiversity and health benefits of green cities. The first is natural climate control: built-up areas form heat islands where the average temperature in large cities can be 3°C higher than in rural areas, and can even reach 12°C warmer in the evening. Trees not only provide shade, but also cool the air by evapotranspiration; in other words, they allow cities to sweat, a microclimatic effect that can lower the temperature by up to 10°C.

This, in turn, translates into reduced energy consumption of air conditioning systems, a use that in some areas can account for 70% of residential electricity demand in the hottest months. A single tree, says the WEF, can cut 3% of a household’s energy consumption within five years of planting, and 12% within 15 years. On a global scale, this represents electricity savings with great potential for climate change mitigation.

The problem of exclusive green spaces

Secondly, in terms of carbon storage, trees can sequester between 1 and 22 tonnes of CO2 over their life cycle. Third, they reduce air, noise and water pollution. A study in Philadelphia estimated that increasing tree cover by 30% could prevent up to 400 deaths a year due to poor air quality; trees capture gaseous pollutants such as ozone, NO2 and SO2, as well as intercepting air pollution particulate matter. Studies have shown that green spaces correlate with higher levels of immune, cardiovascular and mental health (see box).

This last aspect also highlights the fourth benefit of green cities, their ability to build more humane, inclusive communities with a higher quality of life when the environment is conducive to wellbeing. Finally, green spaces promote urban biodiversity, which in turn improves the health of the trees themselves, and their permeable soils reduce the impact of heavy rains and flooding.

Despite all this, the WEF warns that the area of woodland in cities has declined globally by 40,000 hectares per year over the last five years, under pressure from urban infrastructure. The problem, the WEF and other experts stress, is that urban trees and green spaces have traditionally been seen as luxuries or amenities. In this classic view as havens of nature and tranquillity amidst the asphalt and hustle and bustle of city life, such spaces have never been in short supply in expensive and exclusive neighbourhoods, but tree cover can be 30% lower in poor neighbourhoods.

Green planning with a multidisciplinary approach

But this classic view is changing dramatically. According to plant biologist and urban ecologist Karen Christensen-Dalsgaard, the 1990s saw the beginning of a shift towards the study of the ecology of cities as coherent, functioning ecosystems. This shift in approach means that urban trees and plants are no longer mere ornaments or living umbrellas, but a city infrastructure as basic as any other, interconnected and to be planned with a multidisciplinary approach that integrates plant science and ecology into urban planning, so that green spaces are viable and fulfil “specific functions that improve the sustainability of urban life, contribute to biodiversity conservation, and use resources more sustainably,” in the words of plant biologist Katherine French.

Experts point out that many green spaces fail because these criteria are not taken into account; planting is done on an aesthetic whim and inappropriate methods are used. According to a review by Aberystwyth University, “many solutions are cleverly engineered without giving sufficient consideration to the biology of the vegetation that is used.” In the words of landscape architect Henry Arnold, “trees are not looked upon with the same seriousness as utilities, streets, and building heights.”

Arnold argues that a variety of species is not always the best, but it must be considered which ones and what combinations are suitable for the characteristics of each site. Rather than planting trees in isolation, the ideal is to encourage the vegetation to form an unbroken canopy. Grass lawns are pleasant, but they get hotter than shrub or flower beds, and these also harbour a greater diversity of insects. When planning green roofs, a growing trend, choosing native rather than exotic species can also promote biodiversity. Conversely, a study in Los Angeles found that non-native tree species were preferable for water savings.

As atmospheric scientist Yuyu Zhou points out, ensuring the success of green spaces must also take into account the phenology of plants, i.e. their seasonal rhythms, which in turn are altered by the urban environment. And there is no shortage of imaginative solutions in green space management: in a park in the Canadian city of Edmonton, a pilot project of weeding with herds of goats has been carried out. In short, there is no one-size-fits-all approach to any city or space, and only by pushing for science-based solutions will the city of the future be the place where people want to live, not where they have to survive.

Are plants good for your health?

The many benefits of plants are indisputable, whether indoors or outdoors, public or private. But there is one benefit that, although it never goes unmentioned, requires a closer look: do plants really improve our health?

Research has shown a correlation between green spaces and improved well-being. A study in Toronto, published in Nature, found that having ten more trees in a city block, on average, “improves health perception in ways comparable to an increase in annual personal income of $10,000.” It’s a curious calculation, but reviews of studies tend to agree that the presence of trees and greenery in cities improves physical and mental health, and even children’s attention and school performance. 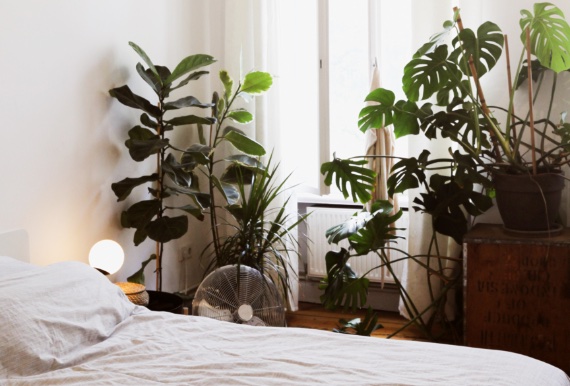 Having plants in the bedroom is not a danger: the main source of CO2 emissions is not the plants but ourselves. Source: Unsplash

Indeed, there are theoretical reasons to support these benefits. For example, plants absorb certain pollutant gases from the air and retain airborne particles. But some experts warn that the net impact on air quality is not yet sufficiently established. According to one review, most studies show a modest reduction of less than 5% in urban air pollution from city greenery. “At local scales there is little evidence to link air quality regulation from vegetation with improved health outcomes,” the authors added. In addition, plants also emit their own volatile compounds such as isoprene and others that in turn contribute to ozone formation. Added to this is the nuisance of pollen for allergy sufferers.

The health effects of plants are sometimes taken to extremes, such as claiming that they purify indoor air, an exaggeration born of a NASA study in 1989 that showed how they can remove dangerous compounds such as formaldehyde and benzene from the air. But this was an experiment in very particular conditions, the conclusions of which cannot be extrapolated to the real world. In return, at least we can rest assured that plants in the bedroom will not suffocate us during the night by consuming oxygen and filling the room with CO2, as an old wives’ tale has it. This is another exaggeration: no matter how many plants we have in the bedroom, the main source of CO2 while we sleep will never be them, but ourselves.

The Physics of Domino Toppling