Integrated Reporting for a Global World

What is the Purpose of Music?

The year 2020 has marked a before and after as a consequence of the COVID-19 pandemic, a virus that has forced the world to focus on science and global crisis management. It has highlighted a need for a multidisciplinary approach and a collective effort to overcome, while offering a recipe that undoubtedly serves to fight climate change. On that roadmap, we´ve compiled some of the most important appointments with sustainability for the year 2021, a year that begins as a crucial decade for the future of the planet. 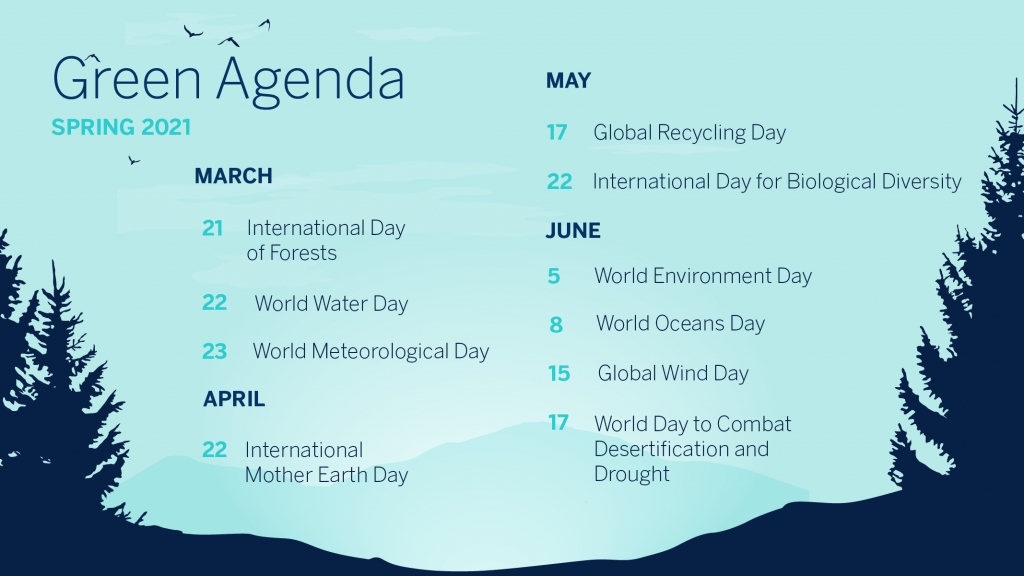 Before taking on new projects, let’s begin by analyzing the path that has brought us to 2021´s starting point: considered the predecessor of the 2030 Agenda and the Sustainable Development Goals, this year the United Nations plan AGENDA 21 will come to an end, which was signed in 1992 at the United Nations Conference on Environment and Development, Rio de Janeiro (UNCED). The institutional and scientific struggle for environmental awareness, and a redesign to the system of consumption and coexistence with the natural environment, celebrates 29 years at a historical moment in which taking action has been imposed as an essential requirement to guarantee the habitability of the planet in the conditions necessary for the survival of the species that inhabit it.

A decade for saving the oceans

Although this effort starts on a terrain that occupies almost 70 percent of the Earth’s surface, it remains largely unexplored and is a crucial source of natural resources: the ocean. In 2021 the launch of the United Nations Decade of Ocean Science for Sustainable Development (2021-2030), is an opportunity for the development of Ocean Sciences with the aim of promoting sustainability and reversing the cycle of decline in our oceans´ health, confirmed by the First UN World Ocean Assessment published in 2016. Marine life stabilizes the climate and supports life on Earth, although it’s been discovered that changes and losses in its structure have degraded this ecosystem, which also exposes it to higher levels of stress as the world’s population increases to the 9 billion people expected by 2050.

Among the key challenges to be addressed in this decade of collective efforts include combating marine pollution, restoring ecosystems and their biodiversity, developing an equitable ocean economy, and ensuring the sustainable production of food from the sea floor, as well as expanding the global observing system of the oceanic environment by creating a digital representation of the ocean that provides new data and knowledge for the development of new technologies that allow us to change humanity’s relationship with the ocean. Between May and June the Kick Off Conference will take place in Berlin (Germany) to address the definitive plan of action for the next 10 years, a fundamental period for the future of our oceans and setting green objectives to save the planet.

10 years to recover ecosystems and biodiversity

There is no denying that 2021 is a key year for the UN’s medium-term goals. The United Nations Decade on Ecosystem Restoration will also come to an end in 2030, a deadline that coincides with the Sustainable Development Goals, and the timeline that scientists have considered the last chance to prevent disasters associated with climate change.

Ecosystems are the biological systems that form a community of living beings in the natural environment in which they inhabit. These different biological scenarios are the key to the Earth’s climate balance and its health is an essential requirement for the health of the planet and its inhabitants. The United Nations Decade on Ecosystem Restoration goal of “preventing, halting and reversing the degradation of ecosystems worldwide,” will contribute to eradicating poverty, combating climate change and preventing mass extinction. Experts warn that, faced with a challenge of this magnitude, success can only be achieved through collective action: “Only with healthy ecosystems can we enhance people’s livelihoods, counteract climate change, and stop the collapse of biodiversity.”

Among the direct benefits of rebuilding ecosystems would be the achievement of more fertile soils and higher yields of timber and fish, as well as the generation of 9 trillion dollars in ecosystem services, according to the United Nations. Restoration itself can be carried out in many ways: by actively repopulating forests or by removing pressures for nature to recover itself, a process that would remove 13 to 26 gigatons of greenhouse gases from the atmosphere.

In May, the Biodiversity Conference or COP 15 held in Kunming (China) will discuss the details of an intervention that, undoubtedly, economically has no buts: investing in the restoration of ecosystems is ten times the investment cost in benefits, while inaction would be at least “three times more expensive than ecosystem restoration.” Despite all the biodiversity protection efforts already underway, biodiversity is deteriorating around the world and this decline is projected to worsen. Governments around the world will seek to define a comprehensive framework to transform society’s relationship with biodiversity and ensure that by 2050 a shared vision of living in harmony with nature is fulfilled.

Other important upcoming dates point in the same direction, such as EU Green Week (from May 31 to June 4) or the Sustainability Research & Innovation Congress 2021 in Brisbane (Australia), between June 12 and 15, 2021. In addition, the progress report for the 2030 Agenda for the Sustainable Development Goals will be published in July, on a date to be confirmed.

The event that has been confirmed and postponed due to the COVID-19 pandemic is the COP 26, the UN Conference on Climate Change. It’s an appointment that should have taken place in November 2020 as a follow up to the famous COP 25 (Madrid), and five years after the historic conference in which the Paris Agreement was signed. It will finally take place in Glasgow (Scotland) on November 1, 2021 and although a priori it is not good news for the environment that such a crucial date has been postponed the UN Climate Change Executive Secretary, Patricia Espinosa, has said: “COVID-19 is the most urgent threat facing humanity today, but we cannot forget that climate change is the biggest threat facing humanity over the long term. Soon, economies will restart. This is a chance for nations to recover better, to include the most vulnerable in those plans, and a chance to shape the 21st century economy in ways that are clean, green, healthy, just, safe and more resilient.” The postponement, then, can perhaps be understood as a truce that will improve our preparation and our collective training for a common and fundamental challenge for our survival: one that will save our planet from the degradation that we ourselves have caused.

Whatever Became of the P-Bomb, the Overpopulation Crisis?