The Role of Artificial Consciousness in AI Systems

Should the Time Children Spend in Front of Screens be Limited?

In multicellular beings, the communication between different cells is continuous in order to maintain balance and homeostasis in all of the organism’s functions. When we receive a stimulus like high temperatures, specialized cells in our body release molecules to promote sweating in the appropriate cells and so reduce the body temperature. This communication is so vital that any fault in transmitting the message will affect the organism’s balance and the individual’s survival will be threatened. In the case of unicellular organisms, it was thought that within a population each cell acted independently from the rest and could not be influenced by neighboring cells. However, these cells have been found to maintain communication mechanisms in order to perform joint functions to support development of the whole population.

This mechanism is known as quorum sensing (QS) and has permitted certain types of pathogenic bacteria to develop resistance to antibiotics, reducing the efficiency of treatments and increasing development of the disease. Knowing how QS works will help in identifying the vulnerable points in the process where new anti-infectious therapies can be applied. Moreover, understanding how QS is organized allows it to be applied in other areas, for example, as a tool in the organization of computer networks and robotic systems.

What is quorum sensing?

QS is a mechanism that regulates gene expression according to cellular density. This mechanism operates through the release of signal molecules known as ‘autoinducers’, so called because they can act on the same cell that releases them, and are able to trigger gene expression throughout the population, causing a global response. 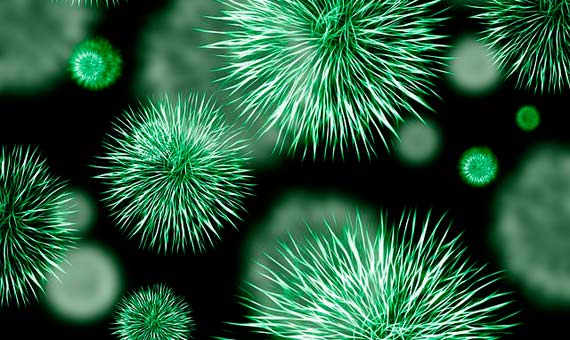 QS was discovered in a marine bacteria that colonizes a squid symbiotically. This bacteria releases molecules from the autoinducer that accumulate in the external environment during the phase of greatest growth; the high autoinducer concentration allows expression of the gene that encodes the luciferase, the enzyme responsible for the oxidation of luciferin to oxyluciferin; finally an amount of light is emitted when the oxyluciferin loses its excited state, a phenomenon known as bioluminescence.

Different forms of QS have been discovered in various bacterial genera. The difference between them lies in the type of autoinducer molecule used and the global response triggered in the bacteria. A wide variety of responses can be generated, including bioluminescence, virulence, swarming, sporulation and biofilm formation.

The two most common QS types

Biofilms cause around 80% if infectious diseases and are a 1000 times more resistant to antibiotics than when in their free form [1].

Finally, the different QS mechanisms in pathogen bacteria have given them capacity to resist antibiotics. However, study is now focused on a new class of antibiotic molecules called  Quorum Sensing Inhibitors, which could act in specific points of the gene expression process, preventing its completion.