5 Movies that Explain the Concept of Singularity

When I switched from Engineering to Physics, my interest initially leaned towards general relativity and cosmology. However, it was also the time when I fell in love with my wife, who was finishing her biology degree in evolutionary ecology. And so, I gradually became familiar with her work on fish behavior (published in Nature) and later accompanied her on two field trips to the Lacandon jungle during her master’s degree to study riparian environments, in a project led by Rodolfo Dirzo, one of the world’s most renowned ecologists and a true eminence in botany, an art or science that is gradually disappearing.

Levy Flights – how to search in nature

It is no surprise that I have traded black holes for a much more complicated topic of study, ecosystems. In my undergraduate thesis work I was fortunate to work with Denis Boyer on a topic he pioneered: the relationship between the spatial structure of an ecosystem and the way animals look for food in it (a process called foraging), and which they discovered converges to a strategy that mathematically we call Levy flights. What Boyer and collaborators discovered is that when the spatial structure in which food is distributed is sufficiently complex (patches of food of many different sizes intermingled, neither very homogeneously nor very heterogeneously) then spider monkeys (case study) forage locally by making relatively same-sized movements in a fairly random fashion, but from time to time they make a movement of a much larger size (a flight). This type of movement has a very special characteristic – it looks the same no matter the scale at which it is observed. We call this scale invariance or fractality.

The fractal nature of Nature

This characteristic of scale invariance or fractality, largely recognized and studied for the first time by the great Benoit Mandelbrot, is present in everything from the spatial structure of rivers to that of our lungs. But it is not only about spatial fractality, later when I was doing my graduate studies in Earth Sciences, I was fortunate to take a research seminar with Alejandro Frank and Ruben Fossion where the central theme was the invariance of dynamic scale, something we call criticality and that implies the existence of a balance between processes that give flexibility to systems and processes that give order.

This criticality or dynamic fractality, as in the case of spatial fractality, turns out to be present in many systems in nature, especially in living ones. In Frank’s group within the Center for Complexity Sciences at National Autonomous University of Mexico (UNAM), a strong interest in understanding the role of criticality in physiological processes and human health began to emerge. Thus, Ana Leonor Rivera and other colleagues began to systematically study criticality in the electrical activity of the heart, discovering that indeed healthy and young hearts are in criticality and that under chronic disease processes such as diabetes or obesity, as well as in old age, this criticality is lost.

Over time we came to understand that criticality is one of the clearest fingerprints of what we call complex systems, a field of theoretical physics that was beginning to gain notoriety at that time in such a way that with these studies we were not only better understanding some previously unconsidered aspects of human health but we were also taking a step forward in the foundations of the sciences of complexity.

At the same time, I was still immersed in ecology, for example helping in field work to monitor endemic fish populations in lakes of central Mexico and how they were affected by the joint effect of the presence of invasive species and climate change. Meanwhile, in my own doctoral project, “From artificial intelligence to quantum mechanics, a physical perspective on sustainable groundwater management”, I managed to intermingle various aspects of theoretical physics, ecology and earth sciences.

Interestingly enough, I believe I myself was performing Levy flights in the area of scientific ideas, which happens to be the most efficient search mechanism possible, laying the groundwork for my current research topic, ecosystem health. Like other important modern terms in Science, ecosystem health is a fuzzy concept that has been defined several times since the late 1980s. This conceptual diversity has led to different ways of measuring it, which in turn has generated a wide range of narratives related to ecosystem health. Ultimately, it has become a constant priority for governments, scientists and decision makers around the world.

From Theoretical Physics to Ecosystem Health

Ecological literature has tended to equate ecosystem health with ecosystem integrity, understood as an underlying attribute in the constitution of ecosystems that produces specific manifestations in their structural characteristics, developmental processes and acquired composition. Ecosystem integrity arises from self-organization processes derived from thermodynamic mechanisms that operate through locally existing living organisms (biota), as well as the energy and materials at their disposal, to reach “optimal” operating points that are not fixed, but vary according to variations in physical conditions or changes in the biota or the environment.

Going back to the human health aspect, my colleagues from the Institute of Nuclear Sciences and C3 of the UNAM – Rubén Fossion and his colleague Ana Leonor Rivera, together with the physician Bruno Estaño – began to study another important aspect, homeostasis.  Their work found that when the human body needs to maintain some homeostatic physiological process (keeping it within a defined range of values), as in the case of blood pressure, this can only be achieved by coupling it with another process that absorbs the variability of the environment, which in the case of blood pressure is the heart rate.

The similarity between the results of Fossion and collaborators with the ideas of Nassim Nicholas Taleb, made me think that in fact homeostasis or resilience, as it is generally identified in ecology, is actually a particular case of Taleb’s conceptual framework in which a system can be Fragile, robust or antifragile, depending on how it responds to perturbations in its environment (see Fig. 1). 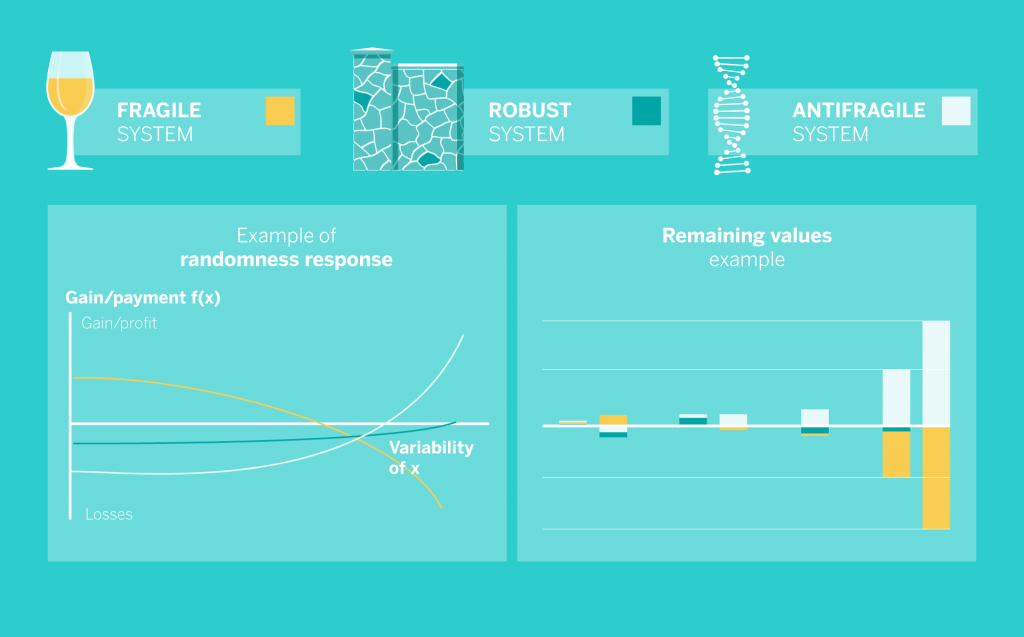 Figure 1: Own creation based on Antifragile by N.N. Tableb. A crystal glass is fragile because in the face of external volatility (children playing around it) it breaks. A construction like the one shown has remained standing despite changes in climate, social systems, etc., it is robust. Life is the ultimate example of antifragility, life always flourishes in the face of chance, as this is a fundamental part of the evolutionary process.

What Taleb realized (2012) is that the opposite of a system being harmed by the variability of its environment, like a crystal glass, is not like a system commonly thought of as being insensitive or recovering from disturbances (robustness or resilience). The opposite of losing to volatility is winning, not being insensitive. Taleb called these types of systems antifragile systems.

Of course, the best example of antifragility is the phenomenon of life. We reviewed the application of these ideas in detail in a recent publication that includes the concept of ecosystemic antifragility for the first time in the specialized literature. Of course, Taleb in his work deals with the subject, but we have only formalized it.  Recently these ideas have begun to be used by colleagues of mine with whom he collaborated, in the characterization of the human gut microbiota and how it affects brain functioning (Ramirez-Carrillo, 2020).

And so, in our back and forth between empiricism and theoretical physics, we moved from characterizing health only by its state (integrity) to also considering its dynamics (criticality) and the way it responds to disturbances (antifragility). We believe that through our work we are showing that this complex way of looking at health applies to different types of systems (human, animal, ecosystems) and at very different scales.

Thus, as far-fetched as it may sound at first, theoretical physics (specifically complexity) has much to say about the health of ecosystems, as traditionally understood, but also viewing organisms themselves as ecosystems (López-Corona et.al. 2019), or even the Earth as the planetary ecosystem.

The Big Bang, a Spark That Originated All The Matter in the Universe