Poetic Reason as the Creative Center in María Zambrano

To Be or Not to Be: That is the Question

As is widely known, Greek myths and, by extension, Roman myths have greatly influenced many aspects of western culture ranging from literature to cinematography, through various arts and sciences. But you may also have the idea that these myths are already “dead”. However, some of these myths still survive to this day, and somewhere you would perhaps least expect: in science. One of these myths is that of Scylla and Charybdis, whose trail continues to appear in various fields of Biology, such as Taxonomy, Genetics and Biochemistry, and in other fields such as Geography and Astronomy.

The myth of Scylla and Charybdis

The myth as it appears in Homer’s Odyssey describes an area of sea with a channel where, on one side, there is a monster, Scylla, with a woman’s torso and a fish’s tail from which six dogs emerge, each with two legs ending in heads with three rows of teeth that fiercely attack the ships passing through her side of the strait. On the opposite side of the channel, there is a whirlpool, Charybdis, that periodically—three times a day—alternatively gorges and disgorges the ships sailing by. And since the channel is very narrow, the passing ships are in great danger, because if they don’t fall into the claws of Scylla, they fall into Charybdis’s waves. In fact, on his journey back home as told in the Odyssey, and on the advice of the goddess Circe, Ulysses passed by Scylla’s side so as to lose “just” six sailors but not the whole ship. 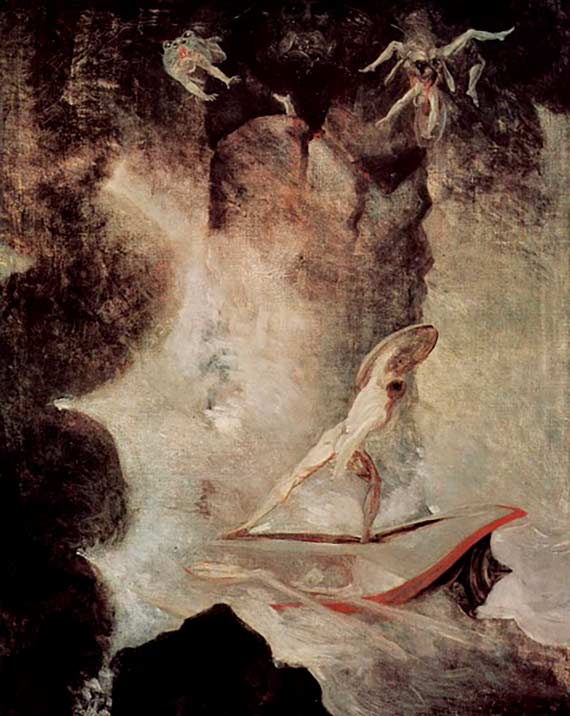 This myth has appeared in numerous literary works—from Homer, Ovidio and Virgilio to Manzoni and James Joyce—as well as in artistic works, for example in paintings, ceramics, fountains, sculptures and coins. It has even established itself in journalism-, medical- and legal-related language to describe very dangerous situations, in which there are apparently only two alternatives to get out, but both are undesirable. And in common language, the proverb that invokes this myth means to be between “the devil and the deep blue sea.”

The “flesh and bone” myth

As has happened with other myths, attempts have been made throughout history to look for possible real situations in which this myth could be more or less based. In this case, what has been most defended geographically speaking is that the myth may be somehow related to the situation in the Strait of Messina, which separates Sicily from Italy and is less than 3-kilometers wide at its narrowest part. In fact, on the mainland part of the strait, in Calabria, there is a city named Scilla with a large cliff and at the base of which it is allegedly defended that this may be the cave where the monster lived. And in front of the cliff, on the island part, in the northwest corner of Sicily, there is a cape (Cape Peloro) that has a whirlpool in front of it and has even been included in marine charts as Charybdis. But, of course, no traces of Scylla have been found; however, the Greeks did know of, for example, reptiles and even mammals with two heads. And the possible whirlpool, at least at present, is not large enough to “absorb” ships.

In addition, the names of this myth have been used profusely in Biology since Linnaeus began to give plants and animals scientific names in the eighteenth century. In 1753, Linnaeus himself gave the name Scilla maritima to a liliaceae plant with large bulbs widely spread throughout the Mediterranean that has been called scilla or squill since ancient times and the common name of which in English is sea onion. Subsequently, with all the changes that taxonomy in general and particularly that of the “liliaceous” plants is undergoing, this species has passed through the Urginea and Drimia genera and, finally and very recently, 1998, it reached the other “extreme” of Scilla, since it has been described as Charybdis maritima. In contrast, Linnaeus did not use the names of the two monsters to name animal species. But in the group of “crabs” that he included in a very broad genre called Cancer several genera have subsequently been separated, one of them being Scilla and the other Charybdis.

Another field of Biology in which mythical names are used is that of genes and their mutations. Specifically, in one of the species most studied by Genetics—the Drosophila vinegar fly—some genes have been named with mythical names, such as Ariadne or Medea. And it is precisely in this species that two genes have recently been described, scilla and charybde (sic), that are involved among other things in embryonic fly development. The curious thing is that it has subsequently been proved that there is a homolog of these two genes in the human genome, the RTP801 gene, which, among other aspects, is involved in the development of cortical neurogenesis and in the migration of neurons (1).

Outside the human body, this myth has also reached geographic regions far away from where it originated. Consequently, there are glaciers and waterfalls in Antarctica and Canada, and mountains in New Zealand that bear the name of Charybdis. In this case, there is also another mountain very close called Scilla, as well as sandbanks on the coast of the Philippines such as that known as ”Charybdis shoal” by the American maritime service.

Since ancient times, the plant Scilla-Urginea-Drimia-Charybdis maritima has had diverse uses ranging from traditional medicine such as diuretic, emetic, expectorant, stabilizer of heart problems etc., to its use for ritual practices, including its use as an insecticide and rat poison. The natural principles on which these historic utilities can be based are currently being found.

Specifically, in Ch. maritima a plethora of active ingredients such as alkaloids, glycosides, sesquiterpenes, homoisoflavonoids, bufadienolides, etc. have been characterized for some years now. Some of them are specific to these plants and therefore receive names such as scillirosides, urginerosides, etc. Some of them are being investigated and their activity is beginning to be proved such as cardiotonic, antimicrobial, cytotoxic, anti-inflammatory, etc.

Following this “biochemical” path, in 2006 it was found that in the bulbs of Charybdis maritima there is a protein precisely called charybdin which is a ribosome-inactivating protein (2). In relation to this type of protein, which only exists in some plants as well as in some bacteria and fungi, intense research is currently being carried out to use them as immunotoxins in the fight against cancer, because they seem to act more on cancer cells than on normal cells. In fact, although charybdin does not appear to be very active as a ribosome inactivator, a recombinant antibody based on this protein is beginning to be marketed, albeit only for research purposes for the time being.

Following the trail of charybdin, it was verified for the first time in 2016 that in ancient times the bulbs of Charybdis maritime were used in funeral practices. It has thus been seen in a Middle Eastern burial from more than 7,000 years ago that both the buried and burial offerings were “coated” with a paste that in addition to bovine blood, carried collagens, resins and vegetable proteins among which charybdin was the most prominent (3).

All this shows that at least in the case of Scylla and Charybdis, Greek myths still leave their mark on science. And this is not a unique case, as we only need to look to see how other Greek myths already mentioned such as Medea or Ariadne appear in Biology, or how the collection of all of them serve to name planetary satellites and other astronomical bodies in our solar system that have long since been discovered as well as those still being discovered. Incidentally, there is an asteroid that is part of the great asteroid belt between Mars and Jupiter called Charybdis, so we could say that this myth has gone as far as the “stars.”

Technology that Serves our Senses