The Latest Findings on Memory

How Does Space Affect the Human Body?

The Geographic Importance of the Magellan-Elcano Expedition – 500 Years On

On September 6, 1522, the ship Victoria, with 17 crew members and captained by Juan Sebastián Elcano (18 in total including him), docked at the port of Sanlucar de Barrameda after sailing for just over three years and after traveling almost 70,000 kilometers, circumnavigating the globe for the first time, opening the geographical horizon to previously unprecedented limits.

The voyage had been initiated by the sailor Ferdinand Magellan (Fernão de Magalhães in his native Portuguese) and was part of the competition between the crowns of Portugal and Castile, taking part during the Age of Discoveries of the 15th and 16th centuries, led by the Iberian countries. The declared objective was to determine the exact location of the Moluccan archipelago, in present-day Indonesia, the source of the exotic species that were brought to Europe at extraordinary cost. Magellan, who had sailed Indian waters and traded in India, went into the service of Emperor Charles V and offered him an empirical demonstration that these islands were under his sphere of influence, according to the Treaty of Tordesillas of 1494.

The underlying problem was the determination of the longitude or position along a parallel, in the east-west direction. This challenge, which was the real driving force of the Scientific Revolution of the 17th and 18th centuries, was only solved by astronomical methods and precise clocks 250 years later. Thus, Magellan, who died in April 1521 in the Philippines, was wrong in his initial hypothesis, although in the end the jurisdiction (without taking into account the inhabitants of the country) was settled between Portugal and Spain by the 1529 Treaty of Saragossa, which ceded any rights to the Lusitanians. In any case, regardless of other geopolitical considerations, the first circumnavigation around the world changed the perception of the world forever, not to mention the knowledge of its physiognomy. 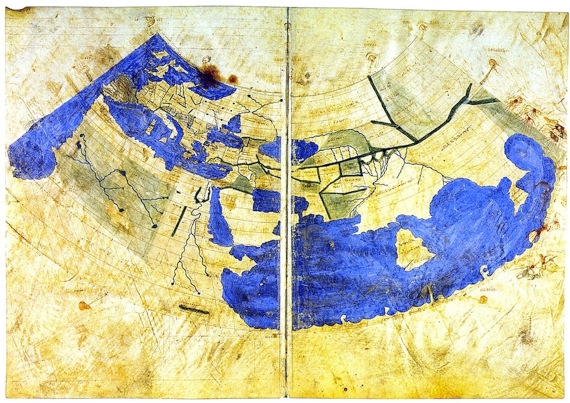 Map of the world from Claudius Ptolemy’s Geographia, in the Codex Urbinas graecus 82 manuscript, held in the Vatican Library. It represents all western geographical knowledge up to the beginning of the 15th century

The history of mathematical geography dates back to Greco-Roman times. The scholar Eratosthenes of Cyrene(circa 276 – circa 195/194 before common era), who coined the term geography, proposed the use of meridians and parallels to locate a point on a map, as well as making the first accurate determination of the size of the planet. But it was the polymath Claudius Ptolemy(circa 100 – circa 170 common era), who really shaped the image of the western world and the Islamic civilization for 1300 years, until the discovery of America By the Spaniards and the circumnavigation of Africa, arriving in India, by the Portuguese.   Ptolemy edited a geographical compendium, called Geographike Hyphegesis or, simply Geographia, which may have had maps, including a world map. Lost in Western Europe, it was preserved in Byzantium and widely spread in the Muslim sphere. In any case, the recovery of this manuscript, which was to have such an influence on the Age of Discoveries, is worthy of a thriller novel and deserves its own story.

Sometime around 1295, an obscure Byzantine scholar made several copies of Geographia, thereby aiding in its survival. One hundred years later, Emmanuel Chrysoloras, of the same origin, settled in Florence as a professor of Greek and brought a copy of Geographia, perhaps the product of his own hand (which could be the Codex Urbinas graecus 82 Figure 1). In this city, one of the birthplaces of the Renaissance, it was translated into Latin and copied on several occasions, always by hand. The first printing with maps, entitled Cosmographia, appeared in Bologna in 1477.

Behaim’s globe of 1492, and development on a map. The map was made according to a Mercator projection using the Greenwich meridian as a reference and includes a comparison with reality. Source: L’homme et la terre

Portuguese and Castilian explorations of the Atlantic Ocean, often with sailors born in other countries, began in the 13th century, although they experienced a significant boost with the successive discoveries of the islands of the archipelagos of the Azores, Madeira and Cape Verde by the Portuguese. The Equator, an unsurpassable frontier in ancient times, was crossed in the 1470s, while Bartolomeu Dias, in his voyage of 1487-1488, crossed the Cape of Good Hope. All this new cartographic information was reflected on the terrestrial globe created by the renowned cosmographer Martin Behaimin 1492 (Figure 2), just before the arrival of Christopher Columbus was announced to the lands that would later be mistakenly called America. The cartography was based on the specifications developed by Ptolemy, assuming a smaller size of the world than that proposed by Eratosthenes, a planet on which navigation westward to Asia was feasible. 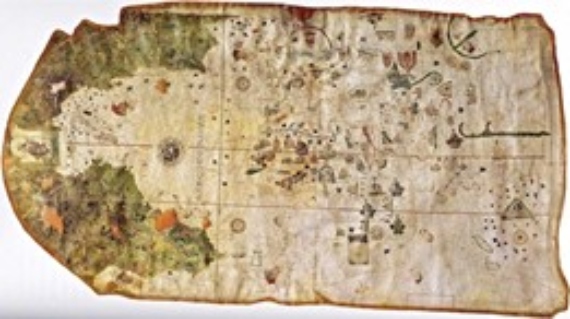 The first European navigation of the Indian Ocean was conducted by Vasco da Gama, who reached India on his voyage of 1497-1499. These cartographic additions are reflected in the first map of America Made by Juan de la Cosa in 1500 (Figure 3), where all of Africa can be seen, although its east coast is greatly distorted. The letter lacks information on the space between the new continent and Asia.

The Cosmographer Martin Waldseemüller possibly using charts describing the voyages – some possibly fictitious – of Amerigo Vespucci, a sailor who had traveled under Portuguese and Spanish flags, published a map in 1507 (Figure 4) that would leave an everlasting mark on universal history: he named the new continent, attributing much of the success of the discoveries to Vespucci. Prior to this was the Cantino Planisphere 1502, which includes the demarcation of the treaty of Tordesillas, that of Caverio (1504-1505), or Contarini, (1506), which were copies of the former. 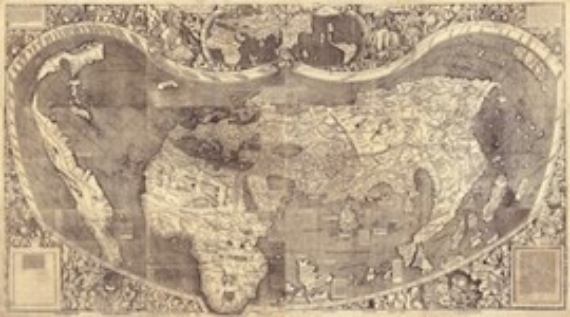 In 1517 Vasco Nuñez de Balboa crossed the isthmus of Central America and bathed in the waters of a new ocean, the South Sea, which he called the Pacific. Now with the knowledge that sailing to Asia was possible, under the command of Fernão de Magalhães, two years later the five-ship fleet set sail with 239 men. A total of 35 of them survived, as some of them would later return by other means. The trip, reported by Antonio Pigafettawho participated in it, and by Maximilianus Transylvanus, secretary to Emperor Charles V, who interviewed some of the survivors, can be classified as a true epic in which the capacity for suffering and the determination of the individual commanders and sailors could often be seen. Despite this information, the new discoveries were not reflected in the maps of those years, such as the one made by Laurent Fries in 1522, which was republished several times without being updated. 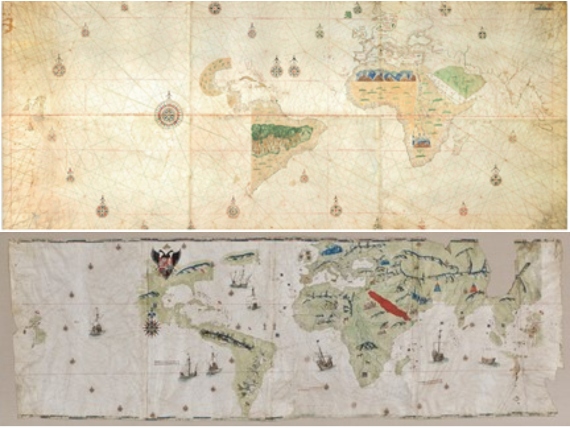 Turin Map of 1523 and Juan Vespucci’s Planisphere of 1526, possibly made at the Casa de Contratación in Seville after Magellan-Elcano’s voyage, where the immensity of the Pacific Ocean can be appreciated

The so-called Turin Map (Figure 5, above), an example of the Padrón Real kept as a state secret by Spanish navigators, is a reliable sample of the cartography of that time. It is possibly the first one executed after the voyage of Magellan-Elcano, in 1523, and has been attributed to  Juan Vespucio, Amerigo’s nephew, and to Nuño García Toreno. Similar, and of confirmed authorship of John Vespucci, is the 1526 world map (Figure 5, bottom). In both cases, the immensity of the new ocean and the great precision of the coasts bordering the Atlantic and the Indian profile of Africa, the result of Portuguese explorations, can be observed. 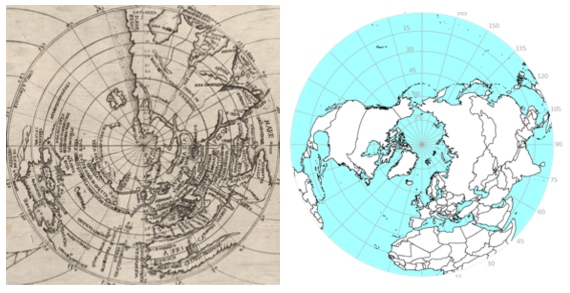 Detail of Juan Vespuccio’s map of 1526, in a polar stereographic projection, and comparison with a modern map. The errors in the longitude measurements, which caused the oversizing of the Eurasian landmass and the consequent decrease in the size of the Pacific Ocean, can be clearly seen

The terrestrial globes made by Johannes Schöner in 1515, 1520, 1523 and 1533 are excellent examples of the partial incorporation of the Iberian discoveries. The one made in 1523 already includes the Magellan-Elcano course, although it minimizes the route along the Pacific. The polar representation of Vespucci’s 1526 map, in which the Eurasian mass occupies practically half of the globe, while the Pacific is spread over less than a quarter of it (Figure 6).

In any case, the Spanish secret maps derived from the Padrón Real show much more realistic dimensions. The 1529 version by Diogo Ribeiro (Figure 7), who was born in Portugal and later naturalized as a Castilian, lacks complete information on the west coast of the American continent or the islands of the Pacific Ocean, explored by Spanish navigators throughout the 16th century. This map, considered to be the first scientifically executed map of the new discoveries, was held in the Casa de Contratación in Seville and was the official, compulsory reference for all Spanish pilots and cartographers. It shows, beyond any doubt, the voyage of Magellan’s ships, completed by Elcano and his small crew, changed the face of the Earth. This scientific feat has not always been fully appreciated, although Magellan has received an astronomical tribute, as two of our own satellite galaxies have been named after him. However, a fairer recognition would be to name each of them after each other (not forgetting the Persian astronomer Al-Sufi). Be that as it may, this is the first circumnavigation that changed cartography and with it our position in the world.

Diller, A. (1940). “The Oldest Manuscripts of Ptolemaic Maps,”  Transactions and Proceedings of the American Philological Association, pp. 62-67.

Nordensjiöld, A.E. (1989). Facsimile-Atlas to the early history of cartography with reproductions of the most important maps printed in the XV and XVI centuries, Stockholm; Nedeln Liechtenstein,

Sánchez, A. (2001). “Cosmography and humanism in sixteenth-century Spain: the Geographia of Ptolemy and the image of America”. Scripta Nova. Revista Electrónica de Geografía y Ciencias Sociales., vol. XV, no. 354. Barcelona: University of Barcelona.

How to Turn Your Body Into a Renewable Power Plant