Proposal of a Dignity Scale for Sustainable Governance

History of Windpower: From its Origins to World War II

In several previous articles, I have described the general characteristics of the winds that are used by wind turbines, how these generators work, and the scientific foundations of this energy source. In this text and a subsequent one I am going to briefly cover the history of the origins of this source of energy.

A survey through to the 19th century

Humankind has exploited wind energy ever since records first began; in fact it was harnessed to propel boats along the River Nile as long ago as 5000 BC. In around 200 BC, simple windmills were used to pump water in China, while in Persia and the Middle East there were windmills with a vertical axis and reed sails designed for milling grain. In the 11th century, new ways of using wind energy spread throughout the world: settlers in the Middle East used windmills extensively for milling grain to produce foodstuffs, and the merchants and crusaders who returned from those lands brought this idea back to Europe. This allowed the inhabitants of the Netherlands to refine the windmill and adapt it to drain the lakes and marshes of the Rhine delta.

One very familiar image in Spain is the famous windmills of Campo de Criptana, which would become so well known in the 17th century thanks to the ingenious gentleman Don Quijote of La Mancha. These emblematic windmills with sails served to pump water or grind grain, and their use was widespread until well into the 19th century, With the start of the industrial revolution, the use of these windmills declined significantly, as from that point on the main sources of energy were steam engines powered by coal and electricity.

From the 19th century to World War II

When this technology reached North America in the late 18th and early 19th centuries thanks to emigration from Europe, windmills began to be used to pump water in farms and ranches, and subsequently to generate electricity for homes and industry. The second half of the 19th century saw one of the most important advances in wind technology, with the emergence of the popular American multi-blade windmill, which has since served to pump water practically everywhere in the world. Its features would be exploited in subsequent years to design today’s wind turbines.

In 1887, the American scientist Charles F. Brush (March 17, 1849 – June 15, 1929) built what is today known as the first wind turbine for electricity generation. This giant, the largest in the world, had a rotor diameter of 70 m and 144 rotor blades and was made of cedarwood. It is shown in the image below, where we can just make out the figure of a person to the right of the turbine. This generator operated for 20 years and charged the batteries installed in the basement of his home. In spite of its size, the generator produced barely 12 kW of power, as this type of turbine is not particularly efficient. The following two-part illustration shows these early forerunners:

It was the Danish scientist Poul la Cour (13 April 1846 – 24 April 1908) who later discovered that wind turbines with fewer rotor blades are more efficient for producing electricity that turbines with multiple blades, as the former attain a much greater rotation speed than those of the type built by Brush. In 1899, he designed what can be called the first modern wind generator, shown below. As can be seen, its design was very similar to that of the famous windmills recreated by Cervantes in his novel Don Quijote four centuries earlier: 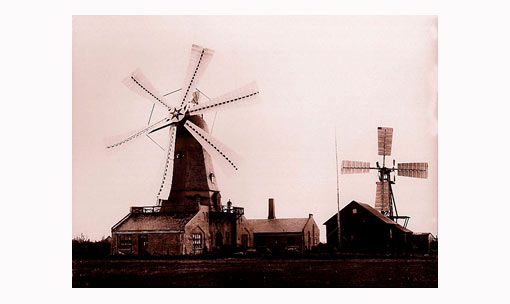 The theoretical bases of the use of wind energy to generate electricity were developed in Germany in the second decade of the 20th century, and are mainly the work of Albert Betz  (25 December 1885 – 16 April 1968), a German physicist who in 1919 originated the law that bears his name, which I describe in detail in this other article.

The groundbreaking development in windpower in Europe occurred in Denmark. It gained considerable traction in the first quarter of the 20th century, and contributed to the construction of a decentralized model for the electrification of the country. In 1908 there were 72 wind generators, with a power of between 5 kW and 25 kW.

Elsewhere, on the other side of the Atlantic, windmills were widely used in the 1930s to generate electricity in many farming regions of the United States where distribution systems had yet to be developed. The first turbine with a power of over one MW (1.25 MW, to be exact) was not installed until 1941. Designed by the scientist Palmer Cosslett Putnam (1900-1984) and manufactured by the S. Morgan Smith company, it was installed in the locality of Castleton, Vermont, USA, and operated for 1,000 hours until a failure in one of the blades brought its operation to an end. Turbines generating this much power would not be seen again for over 40 years.

Stephen Hawking and the Science of Black Holes