Are we Green on the Ecological Front?

10 Things that Change your Brain

This week we recommend Big Data: A Revolution That Will Transform How We Live, Work and Think, by Viktor Mayer-Schönberger and Kenneth Cukier.

Mathematical algorithms, the Internet and an asset that is rising in value: information. These are the three ingredients of a revolution that is just beginning to show its face: Big Data.

The term, which comes straight from the computer labs, describes the growing ability to compile enormous volumes of data, analyze it instantly and subsequently reach diverse conclusions that can be put to a range of commercial uses. 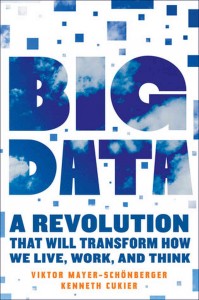 Google processes more than 24 petabytes (1,000,000,000,000,000 bytes) of data each day, more than 10 million photos are uploaded to Facebook in the same time, while Twitter is growing at an annual rate of 200%, with 400 million tweets sent each day. How can all this information be rendered accessible? The answer is a process of datification, to create an accessible information format that can then be quantified, tabulated and analyzed.

Where is the business in this? Information is becoming more and more valuable: data can offer a succulent revenue stream that, unlike material assets, will not depreciate after use and can be processed numerous times for different purposes. The vast range of possibilities that this opens, say the authors, is also one of the main causes for concern for those who see a “dark side of Big Data”. How can we regulate something that cannot be precisely defined, such as potential uses for data? Viktor Mayer-Schönberger and Kenneth Cukier believe that regulation is essential to protecting one of the main rights that Big Data may threaten: privacy. Would some kind of statistics police be required? In their book the authors call such a figure an algorithmist; someone who monitors how all of the collected data is used.

Big Data can be used to make predictions, such as calculating the probability of a person committing a crime in the future, predicting the propagation of a virus or identifying the most dangerous New York City manholes before they explode. Big Data could thus change the way we see business, politics, health and the economy.

The authors divide the book into three parts. The first introduces and explains the term Big Data. The second looks more closely at the potential commercial value of information, while the final section investigates the dark side of Big Data and its potential risks.

According to Mayer-Schönberger and Kenneth Cukier, “Big Data refers to things that can be done on a large scale that cannot be done on a smaller one”. Indeed, the phenomenon is so powerful that the full development of Big Data will lead to three major and interconnected changes: the ability to analyze huge quantities of information, a willingness to accept real-world data disorder and a growing belief in correlation rather than the assumption of coincidence.

The Standard Model of Particle Physics