Millikan, the First Physicist to See the Electron

The Secrets of the Terracotta Warriors

Young (and not so young) people are spending increasingly more time playing video games and living in the metaverse, a trend that has accelerated in the wake of the pandemic. How does this affect their vision? Does it have negative effects or, on the contrary, can it help them to develop visual abilities? We investigate in particular how online life affects visual acuity through visually challenging games.

In recent years we have seen the explosion of e-sports and the emergence of gamers who are professionally dedicated to these competitive video games. Their popularity and the business that their games generate is beginning to rival that of professional athletes, but there are some things on which they cannot compete. Elite athletes display, on average, greater dynamic visual acuity than their gaming counterparts. That’s the conclusion reached by a study conducted by Canadian researchers at the University of Waterloo.

Within the framework of the aforementioned research, dynamic visual acuity is defined as the ability to accurately detect small moving objects. In professional sports, both real and virtual, this can make all the difference, especially in fast-moving ball disciplines such as football, basketball and, of course, baseball or tennis—not to mention quidditch (Go Harry Potter!).

Game 1: Ball sports (more fun if you have competition)

Use your visual acuity to answer the following questions as quickly as possible. This game is more entertaining if you choose to compete with other gamers:

Returning to the above-mentioned study, its authors have concluded that elite athletes display higher dynamic visual acuity than non-athletes and also than gamers, who, conversely, exhibit similar or very similar values to non-athletes. This finding, if confirmed, would settle the open debate on the possible benefits of digital sports vision training programs for professional athletes. Not only that, but it would turn the tables on this approach by putting on the table (or lawn in this case) the option for e-sports players to also train in real life scenarios as a way to sharpen their visual acuity.

Game 2: Training in a real environment

There is something wrong with this gym. It’s not that there is too much or too little of something, but that some detail does not correspond to the real world. Do you have the visual acuity to detect the error, bearing in mind that visual acuity is the ability to identify small, obscure objects?

There is no evidence that e-sports players have better visual acuity than any other people. Moreover, some studies postulate that this activity does not serve as training for improving visual skills. On the contrary, what does seem to be proven is that gamers have a shorter tear breakup time. This means that the moist film that protects the eye between blinks evaporates or breaks down more quickly, leaving the eye more exposed to external agents, resulting in stinging and dry eyes. And they also exhibit a longer accommodative delay, i.e. the time it takes for the eye to readjust to focus at greater distances. In fact, both are familiar consequences for anyone who spends long hours in front of a computer screen.

How does spending endless hours in front of a screen affect our eyesight?

Does this mean that spending a lot of time playing video games is bad for our eyesight? Not necessarily. The question is not so simple and research in this field is very recent. Some of the latest studies suggest that rather than having a positive or negative impact on vision, it is rather a modification of visual perception. Simply put, our vision adapts to detect earlier and better the signals and stimuli that dominate in a digital environment—which happen to be vertical and horizontal lines and right angles—as opposed to the real world, where there is more of a balance between those and oblique lines, which in turn implies a greater perception of angles. In addition, it seems that the human eye is able to readapt and jump from one mode to another quickly when it returns to the real world.

Game 3: How many triangles do you count in these figures?

Unlike in virtual environments, oblique lines and acute angles abound in the real world. How many different triangles can you see in these two figures? 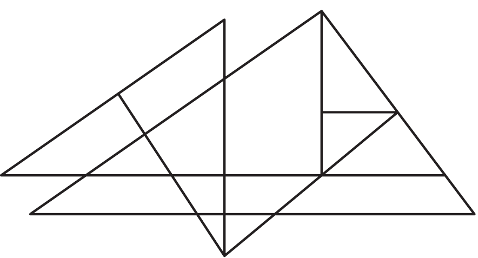 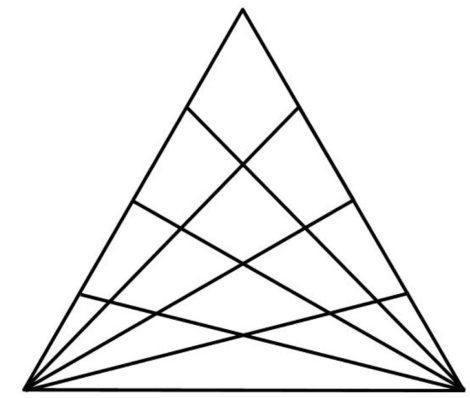 Video games to the rescue of poor vision

The truth is that, although research in this area is still in its infancy, video games are increasingly being considered as a therapy for treating vision problems, which is much different from training the skills of people with healthy vision. In this regard, a pioneering study conducted in 2011 by researchers at the University of California, Berkeley found that treatment with off-the-shelf video games improved the vision of individuals with amblyopia, or lazy eye, even in adult patients, who experienced a marked improvement after just 40 hours of play.

Similarly, a study by researchers at the University of Rochester found that action video game therapy significantly improved the peripheral vision of children with poor vision, almost immediately and with long-lasting effects. These results suggest great potential for the application of games in virtual environments as a treatment for various eye ailments.

The original image, which occupies the upper left quadrant, has three copies, each of which occupies one of the other quadrants. In each of them, two errors have occurred during copying. Try to locate them. 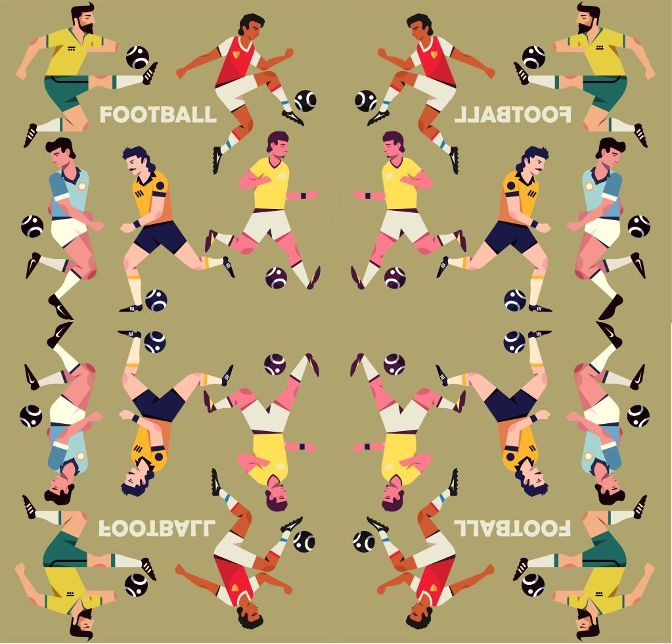 There are seven different types of balls: football, basketball, volleyball, rugby ball, tennis ball, golf ball and baseball. The most numerous are baseballs and the scarcest are volleyballs. The red arrow points to the intruder, which isn’t a basketball, though it sort of looks like one. 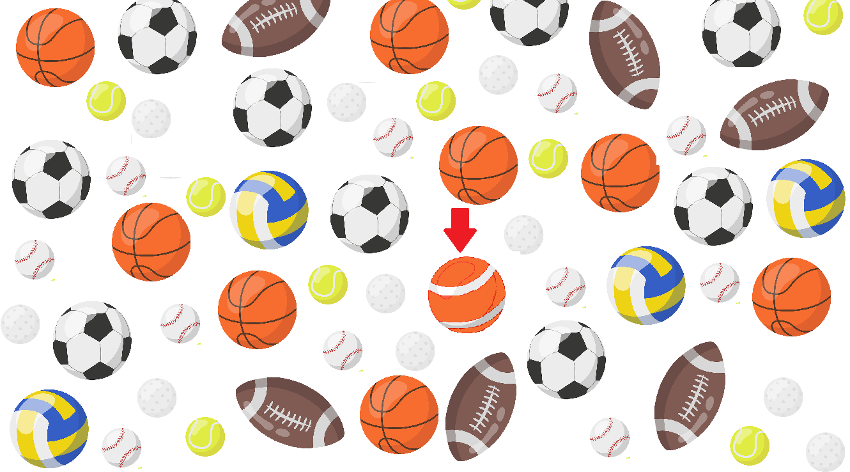 The shadow of the kettlebell (highlighted with the red circle) is inverted. In the real world it would never look like this. 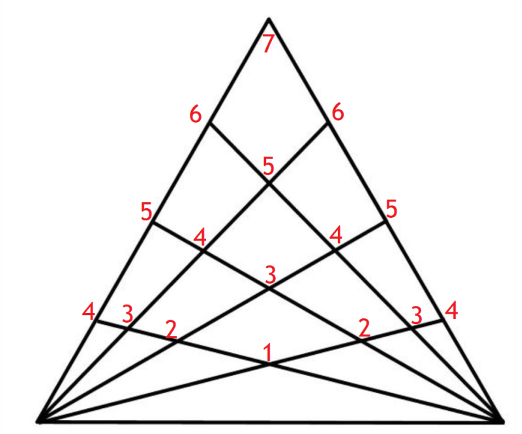 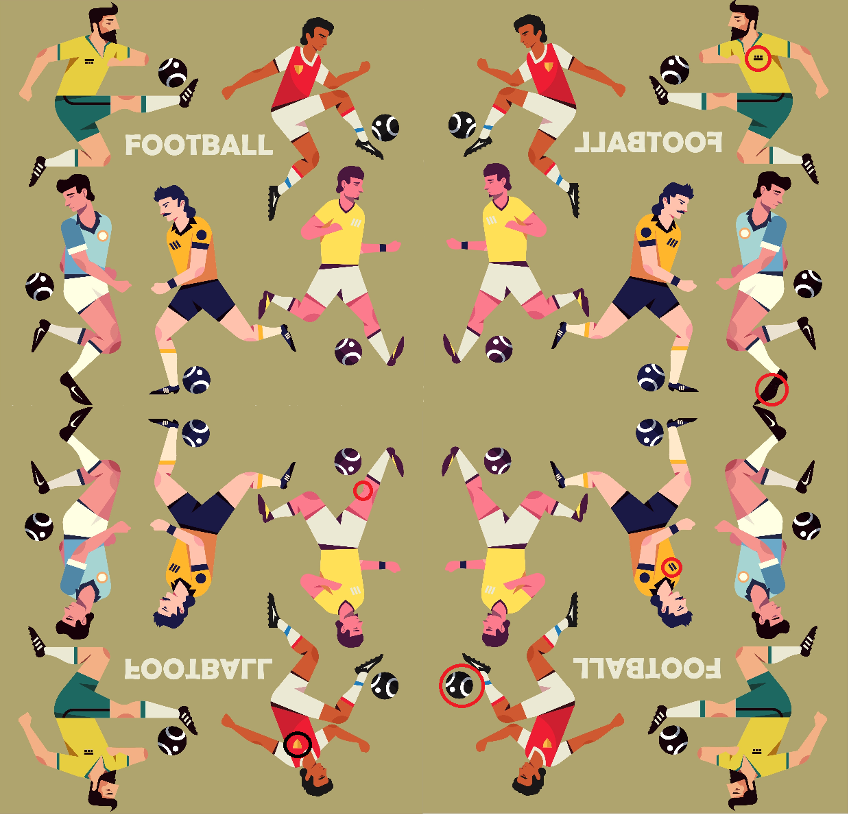