Seven Things from our Homes that Harm the Environment

OpenMind has held in Madrid its 1st Collaborators’ Meeting, which was attended by 50 people who already collaborate in OpenMind or will start doing so soon.

We had the chance to share some of the community’s main milestones in 2013 and were honored by the presence of Iñaki Vázquez, Professor of Telematics at the University of Deusto, who talked about the Internet of Things. Iñaki is one of the authors of the forthcoming OpenMind book that will be published next year and of which we will be giving more details in the upcoming weeks.

It is time for celebration at OpenMind: This year, in which we have launched the new website and created the Collaborator profile, the community has grown rapidly:

The Internet of Things

During his speech, Iñaki Vázquez used Arthur C. Clarke’s words to present one of the technological trends that will shape the future: the Internet of things.

“Any sufficiently advanced technology is indistinguishable from magic”

Intelligent objects are no longer magic or science fiction; they no longer exist in stories only: from the broom that sweeps on its own in “Fantasia” (1940) or the magic mirror that replies to the stepmother in “Snow White and the Seven Dwarfs” (1937), we have moved on to real products on the market or prototypes that will become a reality very soon: the robot vacuum cleaner or the chair that warns you that you are sitting in the wrong position.

But, what is the Internet of things? It’s not a technological challenge, says Iñaki Vázquez, but rather a user experience, a relationship between people and products. What has not yet been discovered is that relationship: the areas where it will consolidate, how it will be regulated and who will be the agents in charge of doing so. 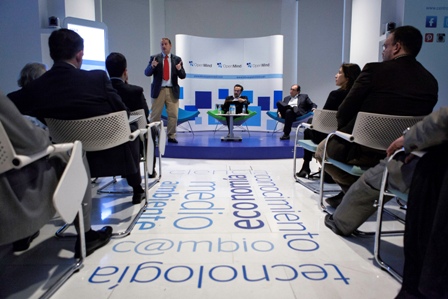 And, what aspects of our lives will the Internet of things change? From his vision as an entrepreneur and expert in telematics, the OpenMind author pointed out some key areas where this trend will evolve in the coming years: Smart Cities, Open Data and Quantified Self.

No doubt, the possibilities seem boundless when we talk about the Internet of things but, where will the boundary be? The “right to silence of the chips” was one of the great topics of the lively debate between our contributors and the author, which continued during the cocktail that followed.

From here, all the members of the OpenMind team would like to thank our collaborators for their presence and lively and enthusiastic participation in this event, where we had the chance to “unvirtualize” and share ideas in person. And, naturally, congratulate and thank Iñaki Vázquez for his exciting speech, through which he took us into the world of the Internet of Things in a simple and straightforward manner.

We’ll see you at the next Collaborators’ Meeting!

Why Can't We Agree on a Definition of Terrorism?