Triangles in the Sky

The Left-Handed Brain, Between Science and Myth

The Birth of Genetic Fingerprinting, an Invaluable Tool for CSI

In 1984 Alec Jeffreys believed he had made a major breakthrough in finding out what distinguishes one person from another, and hoped to use it to track down genetic traits of hereditary diseases and find markers in DNA that would help us to diagnose them. Today we know that a person shares about 99.9% of their DNA with any other human being, and that genetically we are not very different from animals of other species. Jeffreys had observed something surprising: when he analysed the myoglobin gene he discovered small fragments of non-coding DNA (also known as “junk” DNA) that repeated multiple times within the genomic sequence. Intrigued by this, Jeffreys found that this same piece of DNA was scattered throughout the genome.

The number of repeats of this piece of genetic code varied greatly from person to person and Jeffreys devised an ingenious experiment to count them, and thereby compare the DNA of related people. First, he prepared a DNA sequence complementary to the “junk” fragment, tagged with a radioactive molecule to act as a probe to signal its repeats throughout the genome. Next, he placed a sample of an individual’s DNA on a slide, onto which he applied the sample with the radioactive probe and, finally, he exposed the slide to X-rays to capture an image. He then repeated this analysis with different people in a family. When he developed and compared those genetic X-ray film images, his first thought was that he had failed.

Brainteaser 1: In the absence of a suitable radioactive probe, locate all the repeats of the AGTCA fragment present in this genomic sequence.

However, on the morning of 10 September 1984, Alec Jeffreys experienced his “eureka moment.” The lines on those X-ray images reminded him of a bar code, which precisely identified each individual in his genetic study. He had just discovered what he defined as “a DNA fingerprint that is specific to each individual.” What’s more, he saw that the genetic fingerprint of a fellow lab worker was like an overlap of his father’s and mother’s.

He continued to experiment and found that this identification pattern varied from one individual to another to a greater or lesser extent depending the closeness of the family relation. And he soon realised the enormous potential of his novel technique for forensic investigations, paternity tests, identification of identical twins (the only ones who can share a genetic fingerprint), compatibility in transplants, etc. Ironically, at the time he did not actually think about its potential use in criminology.

Brainteaser 2: Twelve DNA fingerprints are shown. Which two of them belong to a pair of identical (monozygotic) twins? 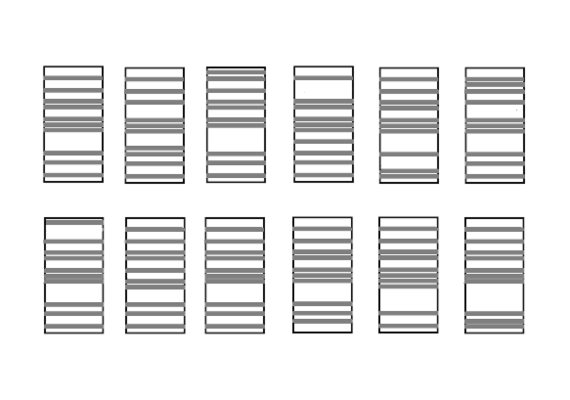 That oversight began to be rectified just a year later when a lawyer sought Jeffreys’ help in an immigration case whose resolution depended on proving that the detainee for deportation was the son of a British citizen, as alleged by the defence. Jeffreys’ genetic analysis provided the definitive evidence to resolve the case by demonstrating conclusively that the boy was closely related to other members of the family.

As a result, Jeffreys now glimpsed the invaluable application his technique could have in criminology. Then, in 1986, British police asked the geneticist to help them find a multiple rapist who was operating in Narborough, near Leicester. The genetic fingerprinting technique made it possible to identify and arrest the culprit, thereby beginning its use as a key piece of evidence in criminology. That use became more widespread when the procedure was improved by replacing the original sequences identified by Jeffreys with so-called short tandem repeats (STRs), fragments of two to four bases that are repeated multiple times in a row (up to 17 times) within the genes.

Essentially the process involves three stages. First, the various STRs are identified and located using a genetic probe. These sequences are then amplified (replicated millions of times) using the PCR (polymerase chain reaction) technique. Finally, the sample with the amplified repeats is passed through a gel that separates them according to their size (and weight), thereby obtaining the genetic fingerprint.

In the case of a crime, the genetic fingerprint obtained at the scene of the crime is compared with that of the suspects to see if they match. When it comes to paternity testing or determining any family link or affiliation, the key is that a person’s genome is made up of two sets of chromosomes, one paternal and one maternal. This means that genetic fingerprints will show more matches the higher the degree of relatedness.

Brainteaser 3: This final puzzle is about a rare case in which three babies are switched at birth in a hospital. The parents’ suspicions leak to the press and the hospital management team reacts to the media scandal, rushing to conduct paternity tests. Which baby belongs to each couple? 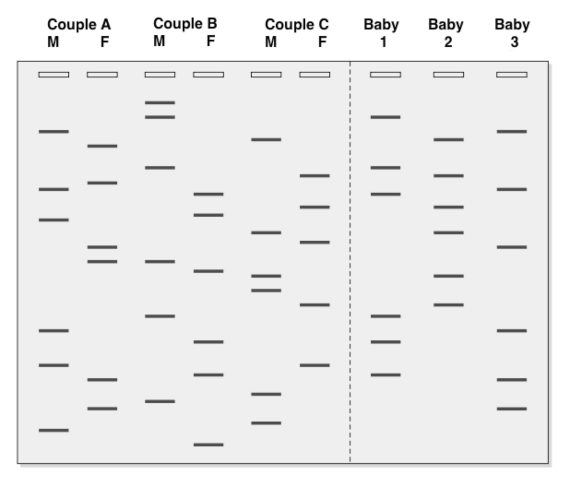 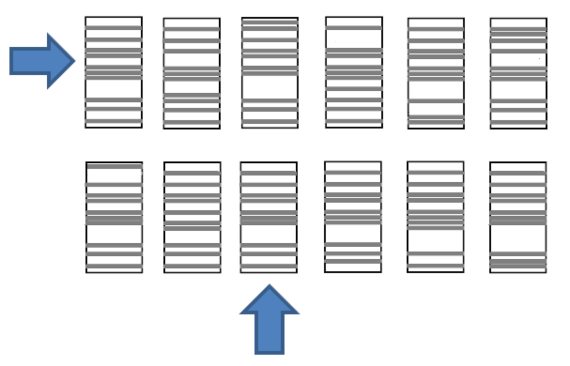 Baby 1 belongs to couple B

Baby 3 belongs to couple A

Green Friday: A Conscious, Sustainable and Committed Alternative to Consumption

OpenMind
Start The Birth of Genetic Fingerprinting, an Invaluable Tool for CSI