The Return of Individual Autonomy

What Is a Programming Language? (Part 1)

Jonas Salk and the Vaccine That Defeated Polio

In some ancient Egyptian reliefs and frescoes there are depictions of children walking with a stick, or adults with a withered leg and foot. Experts have identified in these images the earliest recorded historical cases of polio, an infectious disease whose untreatable epidemic outbreaks in the late 19th century and throughout the 20th century sparked a panic that is not even paralleled by the current COVID-19 pandemic. These days, the terrible spectre of polio has been vanquished in the vast majority of the world thanks to the vaccines developed in the 1950s by Jonas Salk and Albert Sabin, a shining example of the triumph of science and human endeavour. 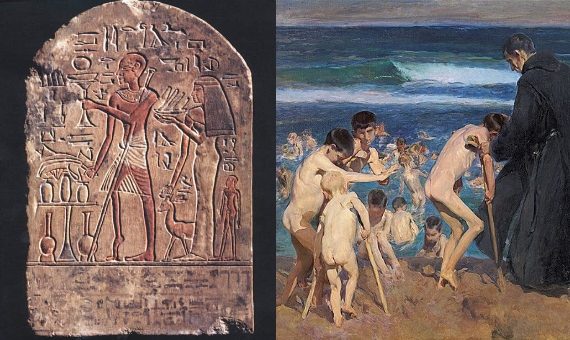 Some objects of Egyptian civilization, such as this 3,400-year-old tablet (left), already represent alleged polio patients. The image on the right corresponds to a painting by Joaquín Sorolla from 1899 and represents the reality of hundreds of children at the end of the 19th century. Source: Wikimedia

Polio did not have a definitive name until the end of the 19th century, and not only because its cause was unknown; it is now thought that it was once a sporadic endemic disease, and that it was—curiously and ironically—the improvement of hygienic conditions in industrialized countries that transformed polio into an epidemic disease by reducing the immunity of the population that used to be exposed to it from a very early age.

The great polio outbreaks of the late 19th century

After its first clinical description in 1789 by the British physician Michael Underwood, who spoke of a “debility of the lower extremities,” the first small outbreaks were reported in Norway in 1868 and in Sweden in 1881. For a time it was known as Heine-Medin disease, after the first detailed medical studies by the German orthopaedist Jakob Heine and the Swedish paediatrician Oskar Medin. But before the German physician Adolf Kussmaul introduced its definitive name in 1874, it was generally known as infantile paralysis.

By then it was already known that the disease preyed mainly on children, leaving them with lifelong paralysis or, in the worst case, causing death. The development of the microbial theory of disease in the 19th century led the Swedish physician Ivar Wickman to propose in 1905 that it was a contagious infection. By then polio was beginning to cause alarm in the medical community, especially following an outbreak in Vermont (USA) in 1894 with 132 cases, the largest ever recorded, in which the physician Charles Caverly was able to recognise the effects on the nervous system of children. After that, outbreaks began to multiply, with thousands of cases.

The recognition of viruses as infectious particles smaller than bacteria, capable of passing through a filter, allowed Austrians Karl Landsteiner—the discoverer of the AB0 blood groups —and Erwin Popper to demonstrate the viral nature of the disease in 1908 by transmitting it to a monkey by injecting it with fluid from the spinal cord of a human patient. Thus the main mystery of polio—its cause—had been resolved and in-depth research could begin.

But around the same time, something else began: the summertime terrors. These annual events, concentrated in the summer and early autumn, in which major epidemics broke out among children, without the authorities knowing exactly how the virus was transmitted orally, led to the closure of swimming pools, beaches, cinemas, amusement parks and any other place where children gathered, while parents locked their children indoors during the hottest months when the disease was spreading on a larger scale. Among the most alarming early epidemics was the one that struck New York in the summer of 1916, but in the decades that followed, major outbreaks occurred all over the world and preventative measures failed to stop them.

Jonas Salk and the greatest medical experiment in history

In the 1930s, the race for a vaccine gathered momentum, but it was a long road. In 1935 virologist Maurice Brodie attempted to produce the first vaccine by inactivating the virus present in monkey spinal cords, but it failed to conclusively work, as did other simultaneous attempts. Only the cultivation of the virus, achieved in the 1940s and 1950s, allowed Jonas Salk to obtain an inactivated virus vaccine in 1953, the first human trials of which included the researcher himself and his family. After what was described as the largest medical experiment in history, with clinical trials involving 1.6 million children in 1954, Salk announced to the world on 12 April 1955 that the vaccine was a success. That same year, 50,000 cases of polio were reported in the US. Just two years later, thanks to the vaccine, the number of cases had dropped to one tenth.

In 1962, a second vaccine created by Albert Sabin in 1956 was approved, in this case an attenuated virus vaccine for oral use, which facilitated its mass administration. The roll-out of vaccination campaigns continued to drastically reduce the number of people affected, and in 1979 the last cases of transmission were recorded in the USA. However, in 1988 polio was still paralysing more than a thousand children a day worldwide, prompting major international efforts to end a scourge that had terrorised humanity for a century. In recent decades, polio has successively disappeared from different regions of the world. Only in Afghanistan and Pakistan do pockets of the disease persist, but there is hope that there too it will soon be eradicated.

Today polio still has no cure, but its mention no longer inspires the panic of the past thanks to vaccines—one of humanity’s greatest discoveries—whose immense power to save the world has been demonstrated once again in this era of COVID-19.

How Bioplastics Can Contribute to the Circular Economy