Teleportation is Here, But It's Not What We Expected

Anfinsen and the Architecture of Proteins

Galileo and his Telescope, the First Eyes to Look Deeply into Space

In 1990, humans placed in outer space the most accurate eye ever to gaze at the universe, the Hubble Space Telescope. But that would not have been possible without a less technological, but equally revolutionary, invention—the telescope presented by Galileo Galilei on August 25, 1609. That instrument of refraction—1.27 metres long, with a convex lens in front and another concave eyepiece lens—allowed the Italian polymath to become the father of modern astronomy.

Thanks to this apparatus, Galileo saw that the Sun, considered until then a symbol of perfection, had spots. The astronomer made direct observations of our star, taking advantage of moments when clouds covered the solar disk, or at dawn and dusk, when the light intensity was more bearable, a practice that left him totally blind at the end of his life.

The Moon was not perfect either. Galileo saw what he considered mountains and craters, evidence that our natural satellite, like our planet, was a rocky body full of irregularities on its surface and not a flawless sphere made of ether, as was believed at the time. These observations called into question the traditional Aristotelian theses on the perfection of the celestial world, which resided in the absolute sphericity of the stars.

The Pisa-born astronomer also noticed that Saturn had some strange appendages, which he described as similar to two handles. These “appendages” intrigued astronomers for half a century until 1659, when the Dutch mathematician, physicist and astronomer Christiaan Huygens used more powerful telescopes to unravel the mystery about the changing morphology of the second largest planet in the solar system—these handles were actually its rings.

However, the most curious thing that Galileo was able to observe with the eight-magnification telescope he built (the first tube he used is believed to have come from a pipe organ) was that Jupiter was surrounded by moons and was a system similar to what the solar system should be. The astronomer first observed the Galilean moons—named thusly in his honour—on January 7, 1610 and at first thought that they were three stars near the planet, which formed a line that crossed it. The second night he was struck by the fact that these bodies seemed to have moved in another direction. On January 11, a fourth star appeared and, after a week of observation, he had seen that the four celestial bodies never left the vicinity of Jupiter and seemed to move with it, changing their position with respect to the other “stars” and the planet.

Finally, Galileo determined that what he had been observing were not stars, but planetary satellites and he published his conclusions in his book Siderius Nuncius, in March of the same year. Galileo originally called the moons of Jupiter “Medicean Stars”, in honour of the Medici family, and referred to them with the numbers I, II, III and IV. This system would be used for two centuries, until the name given by the German astronomer Simon Marius was adopted, who claimed to have observed them before Galileo:

“Jupiter is much blamed by the poets on account of his irregular loves. Three maidens are especially mentioned as having been clandestinely courted by Jupiter with success: Io, daughter of the River, Inachus, Callisto of Lycaon, Europa of Agenor. Then there was Ganymede, the handsome son of King Tros, whom Jupiter, having taken the form of an eagle, transported to heaven on his back, as poets fabulously tell…” wrote Marius in 1614—surprisingly in sync with the writer Cervantes, who in an earlier poem had called the four Jovian satellites “little Ganymedes.” 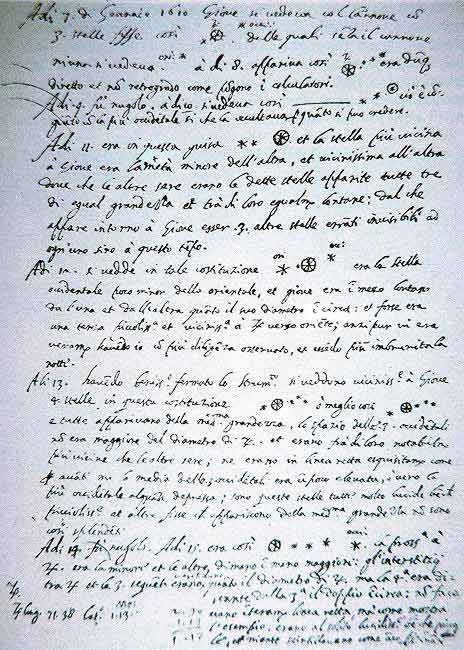 Galileo’s observations on the moons of Jupiter. Credit: NASA/JPL

Observations of the satellites of Jupiter and the realization that Venus passes through phases similar to those of the Earth’s moon confirmed the validity of Copernicus’s heliocentric system, which argued that the Earth is not at the centre of the solar system. In 1632, Galileo published Dialogue Concerning the Chief World Systems, an essay on the relative merits of the Ptolemaic and Copernican systems, with all the evidence that telescope observations had brought to the latter. His scientific militancy earned him the persecution and condemnation of the Catholic Church, and Galileo Galilei would die under house arrest and blind, near Florence, in 1642. While he did have to renege on his ideas, no one could take away from him the title of father of modern astronomy, for opening the eyes of humanity to a new universe.