The Cosmographer Who Unknowingly Gave His Name to the Americas, by Mistake

From oxygen to wood, food or medicine, trees, and especially forests or ecosystems formed by a colony of trees, are an essential source of natural wealth and biodiversity for our planet’s ecological balance. However, every year, around 10 million hectares of forests are lost across the globe, an area about the size of Iceland, according to the United Nations Food and Agriculture Organization (FAO), which also reveals a very telling figure to understanding the crucial role forests play in our economic system: they provide 86 million jobs in industries ranging from paper mills to building construction.

In 2020, FAO released its latest Global Forest Resources Assessment, a report that examines the state of forests in 236 countries and territories for the period between 1990 and 2020. The world has lost about 178  a is covered by forests: 4.06 billion hectares in total, of which 3.75 billion ha are naturally regenerating forests. The tropical domain is home to 45 percent of the world’s forests while more than half of our planet’s forest mass (54%) is in five countries: Russia, Brazil, Canada, the United States and China.

A map to “hide” the world’s last unspoiled forests

Virgin forests or primary forests are made up of native tree species where there are no clearly visible indications of human activity and the ecological processes are not significantly disturbed The world still has 1.11 billion hectares of primary forests, distributed mainly between Brazil, Canada and Russia, although primary forests can be found across planet, including Europe. A group of researchers from Humboldt University created a map based on a study that yielded surprising conclusions: Although these are by no means lands that have never been touched by man, “there are no clearly visible indications of human activities,” explains Francesco Maria Sabatini, the study’s lead author. Paradoxically, the paper kept the exact location of many of these forests a secret to protect them of mass tourism, since they are very delicate ecosystems. 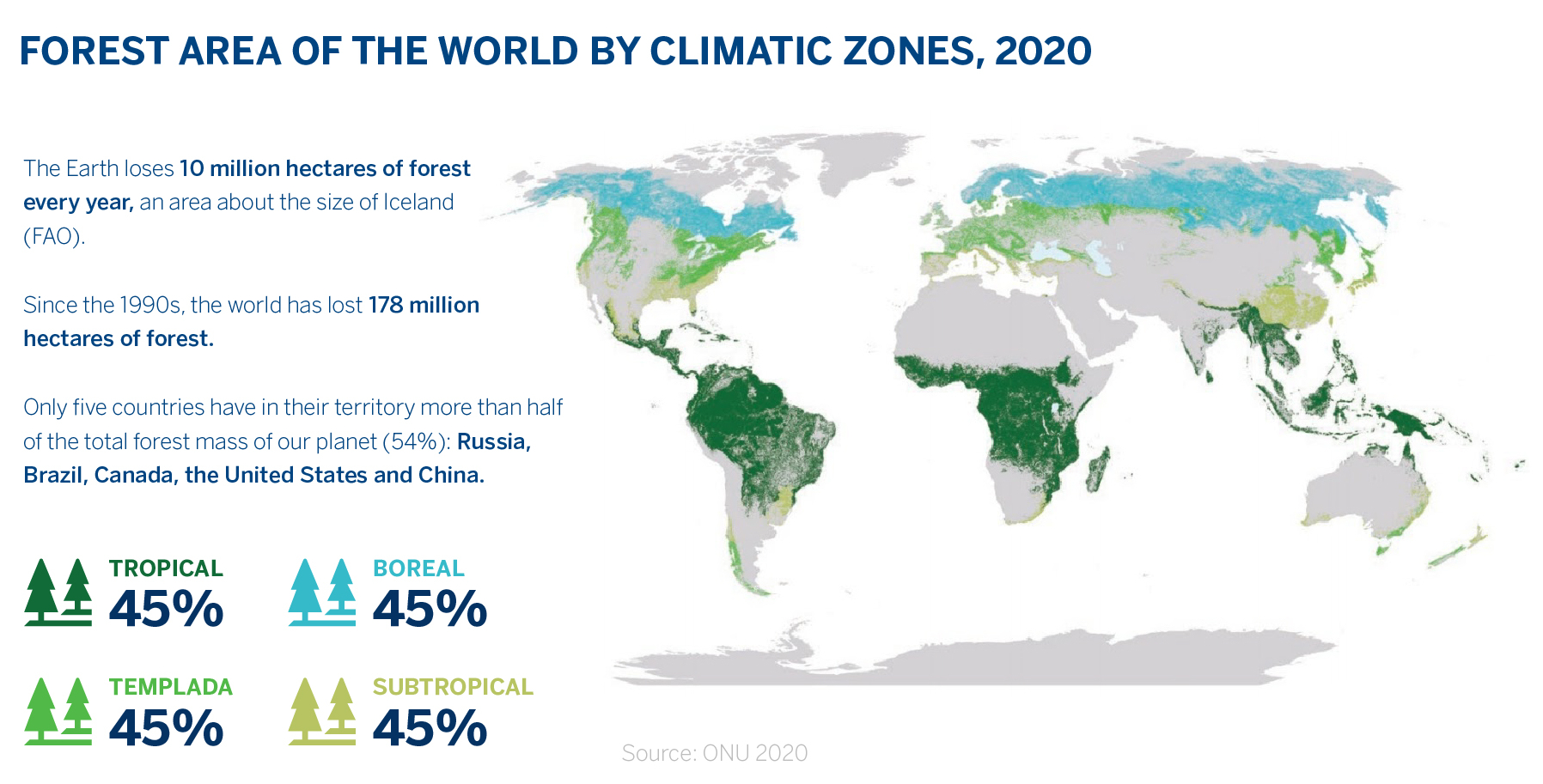 The United Nations Environment Program estimates that the world’s tree flora is estimated to total around 100,000 species / United Nations.

In parallel, the United Nations Environment Program (UNEP) is working to identify and protect tree species that have been brought to the brink of extinction. To do this, it has published a list of all endangered tree species. The list is the result of the first survey assessing the conservation status of tree species worldwide. Global Trees Campaign and International Union for Conservation of Nature (IUCN) Red List, two organizations which collect information on all types of endangered species, estimate that at least 77 species of Trees have become completely extinct in the past 100 years, a figure that is certain to have increased in the 20 years since the last assessment was published.

To prevent this number of extinct tree species from skyrocketing, science is working to save trees from extinction on many fronts, even in the most challenging scenarios, where scientists cannot even salvage seeds for replanting. For seeds rejecting traditional methods of conservation (drying or freezing), a group of researchers from India published in 2019 an article in Nature Conservation explaining how they successfully managed to recover Madhuca Insignis, a tree species declared extinct more than a century ago and which was rediscovered in 2004 in India. There were only 27 individuals left when they began working on a preservation method for these species’ seeds, classified as “recalcitrant” by science, i.e. seeds which stubbornly reject all known preservation methods (drying, freezing, storage in a seed bank etc.). However, the researchers managed to plant and germinate seeds in an artificial nursery and to develop more “fertile” embryos than the adult plants that already existed in nature. In one year, 100 “resurrected” trees were transplanted into the Agumbe rainforest, one of its original habitats, which then only had two adult trees.

The conservation of tree species becomes of particular relevance when it focuses on forests that have survived centuries and millennia of human presence on Earth, since these trees are, after all, some of the oldest life forms that exist. Some trees can live thousands of years, but it is easier for them if they live within a forest and not as isolated individuals. The Araucaria pine, for example, is what we could call a “prehistoric plant” because it coexisted alongside dinosaurs. In fact, it may owe its thought to have evolved its peculiar upside-down paintbrush shape to ward off plant-eating dinosaurs.In the United States, specifically in Utah, there is a quaking aspen colony (Populus tremuloides) that, according to the US Forest Service, is estimated to be an astounding 80,000 years old.

More publications related to this article

Will We Have a Healthier or Sicker Planet After the Pandemic?