Microscopic Enemies: The Contagions That Threaten Us

Bees that Know Mathematics: They Count, Order, Add and Subtract

Beyond Auto-Tune: From Oil Exploration to Revolutionising Pop Music and to AI

Sustainability Notes nº3: The Search for Alternatives to Fossil Fuels
See more books
Start The Surprising Life of the Only Animals That Defecate Cubes
Science Bioscience

The Surprising Life of the Only Animals That Defecate Cubes

Wombats are adorable marsupials, closely related to koalas and with an appearance halfway between a teddy bear and a gopher. Unlike the rest of the marsupials, their pouches open backwards towards the rear to prevent them from filling up with soil while excavating the long underground tunnels and burrows in which they spend most of their time. To help them dig, their short, sturdy legs are armed with powerful claws that don’t, however, prevent them from sprinting at speeds of up to 40 kilometres per hour if the situation requires it.

But if there’s one thing that truly distinguishes wombats from other creatures, it’s that they are the only animals whose droppings are cubic. That’s right, they produce cube-shaped poop. Interestingly, this facilitates the stacking of their faeces in strategic places to mark their territory, minimising the risk of rolling. It’s a surprising evolutionary adaptation, which has inspired us to create this geometric brainteaser, which is added to the puzzle of how it’s possible to poop cubes:

The board represents a territory that is being fought over by two wombats. Each one of them leaves its cubic droppings (brown and red, respectively), as a territorial mark. These cubic droppings leave us with a triple challenge, only suitable for attentive observers: 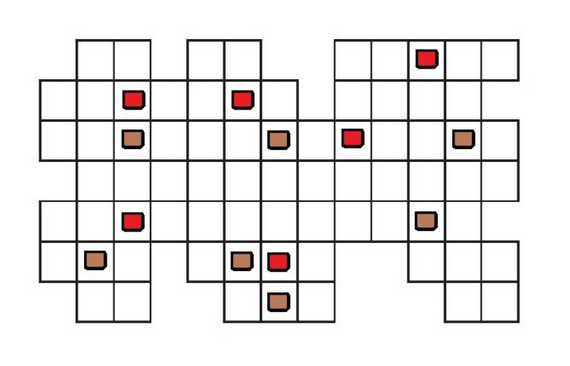 A mystery that has fascinated zoologists

Until recently, it was completely unknown how they were capable of producing such faeces. It’s a mystery that has fascinated zoologists and naturalists for years given the rarity of cubic shapes in nature, and which applies generally for all those shapes that involve the presence of flat faces and edges, because generating them demands a greater expenditure of energy. Despite this, these marsupials are able to defecate an average of 80-100 cubes each day.

But a recent and surprising study by mechanical engineers from the Georgia Institute of Technology has come up with the answer. The investigation began with an autopsy of two road-kill wombat specimens sent from Tasmania (Australia). When opened, the researchers were able to observe a “snapshot” of the 6 metres of intestines and their half-processed contents. In this way they discovered that most of the intestines were filled with soft and semi-liquid waste, while the distinctive cubes only began to appear in the final stretch, in the last half metre where the intestines were now appreciably stiffer and drier.

The next step was to test the elasticity of the different intestinal regions, which allowed them to verify that there was an alternation between stretches of great flexibility with more rigid ones, which also focused on the final part. Apparently, it’s the alternation between these two types of intestinal walls that shapes the stools and endows them with their cubic shape. And once formed, they are compacted in the final stretch until they acquire their iconic final appearance. This digestive process lasts between 14 and 18 days, which guarantees extremely compact and dry poop.

It’s this last fact, specifically, that introduces an element of discord about the purpose of the cubic shape of the faeces. Although the most widespread opinion is that it is a resource to facilitate its stacking, the authors of the research suggest that it could simply be a side effect of an intestinal mechanism whose objective is to maximise the absorption of water present in the faeces. Something very useful, because wombats get nearly all the water they need from food and can spend long periods without drinking.

Why We Know the Lunar Missions Were Real