From Science to Arts, an Inevitable Decision?

Technology, Productivity and Equality are not Mutually Exclusive: Zia Qureshi

If we are more digital, why is it that our economy is not more productive?

The fourth revolution has not resulted in the increase in productivity, which had been expected after analyzing the historically consolidated productivity pattern of other revolutions: the steam engine (I), the electric systems (II) and automation (III) had direct effects on the contemporaneous standard of living due to a major increase in productivity. However, under the umbrella of the digital revolution (IV), the effectiveness of new technologies has not (yet?) translated into increased productivity and, as a consequence, into a better standard of living. What is the reason for this paradox?

The setting of this great paradox is as follows: technology at its peak and stalled productivity. At the same time, inequality is rising in most economies, including unequal distribution of income from work and capital.

Checking inequality: the challenge of technology

Technological change has burst into all areas of our life and some of the key sectors for boosting and consolidating this change are not ready yet, as argued by Zia Qureshi in the article “Advanced Tech, but Growth Slow and Unequal: Paradoxes and Policies”. Market failures and a lack of innovative policies are a vital cross-cutting factor, which explains why we are going through a transition stage yet to be consolidated. 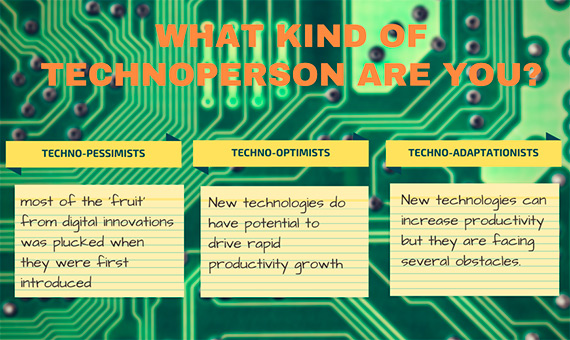 Zia Qureshi, Senior Fellow at the Brookings Institution, believes that this productivity slowdown and increased inequality lead to weaker economic growth, which translates into a wave of social divisions with consequences such as the rise of populism in large economies.

Renewal or death: business and politics in the digital era

According to Qureshi “a cyclical element to the (…) deceleration of productivity growth can be observed.” However, there are deep-rooted structural factors that have slowed down the pace of growth in spite of the technological advances. For example, the increase in productivity has gone down in businesses, except for the leading technology companies. Consequently, the issue is perhaps a lack of penetration of technology in other sectors of the business ecosystem, which explains the barriers to its diffusion.

Technology, productivity and income distribution have been linked by a common nexus: the gap in the current market between leading companies and all other firms. At most, technological advances have been harnessed and assimilated by a small elite of large technology companies. The greater the divergence, the greater the inequality.

Also, this difference results in the erosion of competition, which, according to Qureshi, “is indicated by the rise in market concentration and the decline in business dynamism,” especially in advanced economies, with the United States as the paradigmatic example. This context paves the way for oligopolies: the earnings of large companies are much higher than normal.

From the erosion of competition arises a new paradox regarding investment. In spite of historically low interest rates, there is continued weakness. How is this possible? This could be explained by the post-2008 uncertainty.

Also, these two paradoxes feed back into each other in an endless circle: low investment brings down productivity, which slows down the adoption of new technologies, which generates lower growth projects, which reduces investment.

In this context, income from salaries loses power against income from capital and, as such, inequality is boosted. At the same time, digital technologies promote automation and move the demand for professional profiles toward technification and highly qualified workers. Consequently, professional demand has polarized: there is less demand for profiles with medium/low qualifications linked to manual or routine tasks, while the economy of the informal market (gig economy) rises, powered by the ICT. Training is another of the keys to be able to understand the issue of the penetration of new technologies and their exploitation: educational reform takes time and education has been slow to adapt.

The third paradox emerges at this point: a low number of workers with the necessary qualifications represents a barrier to the diffusion of new technologies; and since people with the right profile aim for the elite of technology firms, the salary gap and income inequality become even more pronounced.

Zia Qureshi, in his article for OpenMind (download for free here), analyzes all the factors that have led the current market to this knot of paradoxes that slow down productivity in spite of the exponential growth of new technologies and the scientific advances. Being aware of the importance of this change and being ready is certainly a challenge with many different facets.

Magic Squares: When Art is Squared With Mathematics