Darwin: Fantastic Animals and Where to Find Them

When Machines Think for Themselves: the AI Threat

The Martian: The Strategic Importance of Agility

This great movie, a real return to form for director Ridley Scott, has a number of useful lessons to offer us regarding organizational activities. This is precisely because it depicts so well the capabilities of human nature in extreme situations, through the trials and tribulations faced by an astronaut played by Matt Damon (Mark Watney), who find himself stranded alone on distant Mars. And in the difficult climate now facing the financial sector, I believe it is most useful to introduce the concept of agility, which plays such a vital role throughout the rescue mission from Cape Canaveral on the spaceship Ares 3. It is the shared agility of our astronaut on Mars, NASA’s Project Office and the rescue craft that is ultimately key to the mission’s success in a hostile environment. Just as the current environment is hostile. 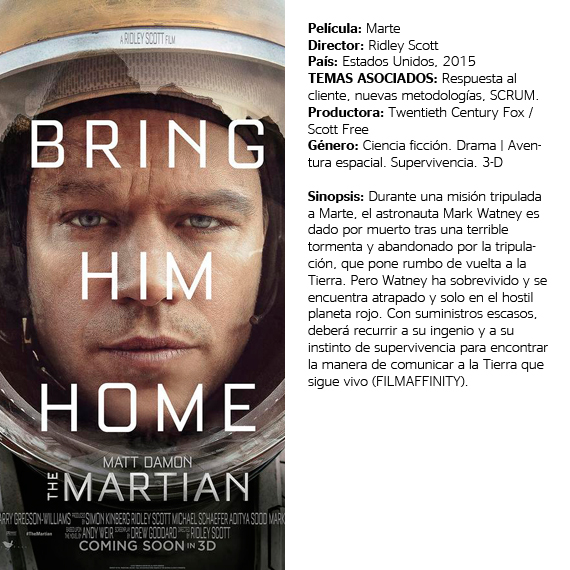 The importance of agility

The concept of “agility” applied to working methodology emerged in the 1990s in the world of software, in response to the “cumbersome” cascading approach that dominated program design and implementation at the time. The field was crying out for a new approach, one that gave greater consideration to customers’ changing needs, offered the possibility of shifting the project focus and implementation “on the hoof” and that would avoid many hours of work being wasted as a result of rigid methodologies.

Thus, on February 17, 2001, seventeen programmers who had been critical of previous approaches coined the term “agile methods”, and drafted what became known as the Agile Manifesto, the key principles of which are outlined in the diagram below:

But it would be a mistake to restrict agility requirements to the world of IT systems: it is equally valid for any other area or function. The Martian clearly depicts how these four principles underpin the plan to rescue Matt Damon, in what is an unprecedented scenario for all the characters in this space drama. Below are some examples from the film of how each premise is implemented:

One decade later, the benefits of these agile approaches, as opposed to more traditional strategies, became evident. The top right quadrant of the following axis shows the key benefits and major improvements ushered in by the new approach. As can be seen, the benefits have been significant, fully justifying the progressive adoption of agile methodologies such as XP, Kanban and SCRUM.

How to work with an Agile approach

So, to create a culture of “Agility” among our work teams –whether they be involved with software or not–, one factor is crucial, as made evident in the movie: mutual trust. This trust is in turn founded on the efficacy and efficiency demonstrated by the progressive results secured by the team.

In The Martian, the long-distance mutual trust between the triangle of Mars-NASA-the Ares 3 spacecraft is key to devising potential rescue plans, and implementing and correcting the same before the stranded astronaut runs out of food and supplies. Earth’s confidence in Matt Damon’s scientific and technical capabilities are reciprocated in his own belief in Cape Canaveral’s dedication to investing the required time and money to rescuing him. Trust enables agility, and agility enables adaption to change, as well as very quick response times and improvisation.

This group-wide trust is crucial for agile leadership of a working team with the following traits:

The following chart shows the attributes of an agile team compared to more traditional groups.

For moviegoers, it is enlightening to see in The Martian how efforts to rescue Matt Damon and bring him back to Earth revolve around the critical factors of speed, attention to detail and every minute that the astronaut spends on Mars. This excellent Ridley Scott movie is great mental preparation for those facing team leadership responsibilities, examining the need to adopt flexible approaches and attitudes in order to successfully achieve our goals in the new, changing and challenging environment. Just like that depicted in The Martian. Don’t miss it.

Business
Teleworking, Video Conferences and Plato’s Cave
Finance
The Big Short or the Loss of the Reverential Aura of Money

Ahmed Banafa
Start The Martian: The Strategic Importance of Agility