COVID-19 and the Crisis of ‘Privatized’ Care

Why is there life on Earth?

Sustainability Notes nº3: The Search for Alternatives to Fossil Fuels
See more books
Start OpenMind Reflects on the Social Influence of the Internet in the Home of MIT
Technology Digital World

MIT (Massachusetts Institute of Technology) hosted a debate yesterday on how the Internet is changing our lives to mark the presentation of the book Change, published by OpenMind. The book contains up to 19 stories from different personalities that reflect on the influence of the Internet as the agent of the most powerful recent change in the economy, education, health and society in general.

Participating in this debate, attended by a hundred attendees, were three of the signatories of the book: the president of BBVA – Francisco González, MIT professor Thomas Malone, and Harvard professor Yochai Benkler. The event was moderated by Jason Pontin, director of the magazine MIT Technology Review.

The first to speak was the president of BBVA, Francisco González. His speech was on the motive for choosing the Internet as the central theme of the book Ch@nge. “The Internet is the main protagonist of the changes that are occurring in the present, affects all areas of our life, has immense potential and involves great challenges and concerns,” he said. 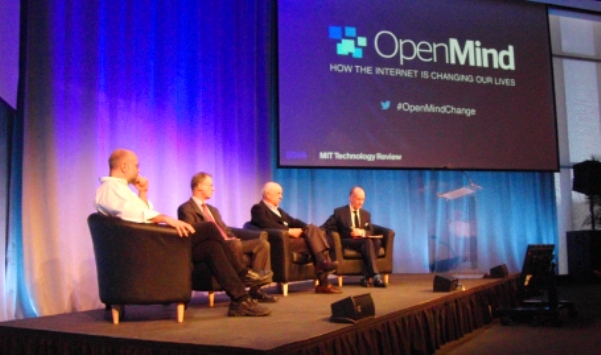 The financial sector is also affected by the digital shift, according to Gonzalez, citing the influence of new technological tools and applications, such as PayPal, which “make us use the software like a wallet.” These examples, according to the president of BBVA, require improved security and technology “to better connect with customers.” As well, this is expressed by an internal change in the companies that “have to adapt to online demands.”

Along these lines, Gonzalez said that BBVA wants to be “a leader in the technological change in the banking sector.” For him, the company is already a “pioneer” and “is a leader in terms of the digital relationship with customers and in terms of services in the cloud.” He added that the present moment is “magnificent” for the development of new offerings and products.

The director of the MIT Center for Collective Intelligence and management professor of the same entity, Thomas Malone, explained how the Internet can contribute to the collaborative society in an intelligent way, giving examples of how this collective intelligence is translated to networks, through the case of the predictive searches of Google, which are advanced at the user’s request, or the case of Wikipedia.

“The Internet spreads information without the need to have a leader or hierarchy as the only source.”

According to the professor, technology, and especially the case of the Internet, has simplified mass communication. “The Internet spreads information without the need to have a leader or hierarchy as the only source,” he said. Thus, this situation allows collective forms of business to develop, ranging “from small companies to large multinationals.” In essence, “the Internet has decentralized the decision-making process,” said the MIT professor.

With these technological facilities there have been projects like Wikipedia and Linux, among others, that have been generated through the collective contribution of users. However, the challenge that Malone throws out is how to harness these resources to solve collective problems such as climate change. As a response, the professor cited the case of Climate CoLab, a platform developed by MIT that drives collective ideas to counter the effects of climate change.

“With an increasingly connected world, we have the challenge to succeed in creating a global mind. Collective intelligence has to make us smarter and, at the same time, wiser,” Malone said in his speech.

Also participating in the event was the co-director of the Berkman Center for Internet & Society at Harvard Yochai Benkler, who described the influence of the Internet when creating new organizational models. He took the example of the culture that historically started from encyclopedias – the Encyclopedia Britannica, which jumped to the digital arena –the case of Encarta– until reaching an open source model –Wikipedia.

Traditionally, companies were situated in a two-dimensional plane according to their degree of centralization and their submission to the demands of the market, in which at one extreme were the companies and at the other extreme the institutions. In recent years, however, companies have adopted a hybrid role that shares them in an atomized way in this same map, he said.

“The future has already arrived and it is not equally distributed.”

If you want to watch the full video of the event, click here.

"3,000 Laguages are Going to Die out During the Next Century"