Towards a New Enlightenment? A Transcendent Decade
See more books
Start The Art of the Pitch
Humanities Communications

The Art of the Pitch

Film producers and TV network executives, although they are always looking for new projects, never have the time to evaluate them.

Plenty are the scripts that remain months gathering dust on the desks of those who have the power to make a dream come true. On the other hand, we also know of projects that took off thanks to a pitch of just a few minutes.

The pitch is a very common practice in the audiovisual industry (and not only in this area) and consists in “throwing” an idea (or story, project, etc) with sufficient rhetorical skill to convince the listener—generally a powerful person. 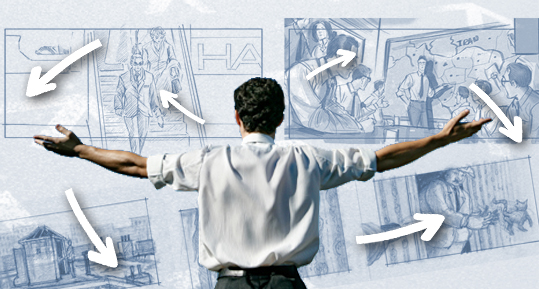 One of the best scenes in Argo, the last film directed by Ben Affleck, deals with a cinema pitch where what is at stake is the life of seven people.

Co-produced by Ben Affleck himself and George Clooney, Argo is a story based on true events and narrates the details of “Operation Argo” as conducted by a CIA agent who, without causing a single drop of blood, was able to save the lives of six US diplomats during the tragic Iran hostage crisis of 1979.

In the scene in question, one of the US diplomats tries to convince a rather angry Iranian policeman that he and his friends are Canadian film makers who are in Tehran to look for locations to film a science fiction feature called Argo. While the policeman reviews the (fake) passports of all supposed film makers, you hear the last call for the flight, which is the sole hope for salvation for all involved.

Tension reaches its limit and the diplomat channels all of his energy and fears into a simply perfect pitch: not only does he brilliantly summarize the (fake) plot of the film, but he is also able to convey to his hostile and dangerous public a vision and to make them part of an experience. The police officer calls the Hollywood studio where an accomplice of the CIA, pretends to be heading the production of Argo and, once  it isestablished that the film makers are not lying, he allows them onto the plane that will take them to freedom.

In a more relaxed denouement of the scene, we see how the police officers—conversing and smiling with the Argo storyboards and flyers in their hands—continue to imagine the rest of the movie: in short, it is a perfect example of what can be expected of a pitch.

Continuing with cinematographic examples, how can one forget the pitch delivery played by Michael Corleone in The Godfather? Don Vito has been the victim of an attack and his son Michael sells the rest of the family on the idea of revenge, which also implies killing a police officer. The Corleone are against it, but Michael proposes a terrific story to them: neither other families, nor politicians nor judges will oppose the assassination of a representative of the law, as long as it is told in the main newspapers that the police officer was a corrupt drug dealer. In Michael’s pitch, although the emotional factor is not absent, what dominates is the lucidity of the strategy: “it’s not personal, it’s strictly business.”

Thankfully, survival for most of us does not depend on the effectiveness of a pitch, as in the case of the diplomat in Argo or that of Michael Corleone, but there may be occasions in which our professional life may in fact depend on a good pitch. And this occurs not only in strictly creative environments—a script writer wants to sell his story to a producer, a publicist needs to convince a client for a new campaign—but also in the world of business; and more so when dealing with innovative business.

The two pillars of a good pitch are the capacity to transmit a vision and make one live an experience; for this a solid and lucid rhetorical strategy isessential, that can stimulate in the listener both the left and right side of his or her brain: not only a romantic dream must be sold, but also a fascinating and viable project.

Emotion is an important ingredient and one must know how to spread it by using a clear and precise vocabulary and an efficient body language, where visual contact is key.

Furthermore, one must know how to show the path to success: a path that is not risk-free but that is real, where less poetic concepts such as cash-flow or fundraising will inevitably take the stage, at least for a while.

All innovation, whether artistic, technological, or business oriented, is a bet and executing the art of the pitch will generate an atmosphere of confidence where all involved—script writers and producers, engineers and designers, managers and stock holders—feel the urge to bet.

We recommend: What Matters Now

OpenMind
Start The Art of the Pitch