The Horses that Saved us From the "Strangling Angel"

How are Earthquakes Measured?

Things You Didn't Know About Einstein

Although infographics are going through good times, expressing data visually is as old as the ancient caves. Throughout history, information design has evolved hand in hand with cartography, statistics, science and journalism. Not only is it a tool for disseminating knowledge, but it is also part of its methods.

Only through graphics have we come to understand ideas as complex as planetary motion or the splitting of the atom.

Today, everything seems capable of being turned into infographics. It’s the sugar that makes it all digestible. Those omnipresent and compelling vignettes in which the most diverse information is compressed to be disseminated on the social media are the modern version of Romanesque frescoes: the way in which the Bible was made understandable for common people. Compressed, colorful and accessible to the masses. Style devoid of substance.

Victims of their own popularity, these graphics only retain the shapes, without taking advantage of the great virtues of the medium. Just like the sushi sold down here and the one prepared by Jiro Ono are not the same, these improvised graphics fail to give an idea of the potential of infographics.

A good infographic can save lives. Or almost, like the map drawn by Dr. Snow, who in 1854 tried to prove —with not much success, it’s true— that cholera spread by water. Not all graphics can be so ambitious, but when they hope to become a very powerful vehicle for knowledge, these are three elements that an excellent infographic should have. In order:

This is taken for granted. Or not. This chart from Pravda (not Miuccia, the Soviet daily) is manipulated graphically to give the impression of growth: 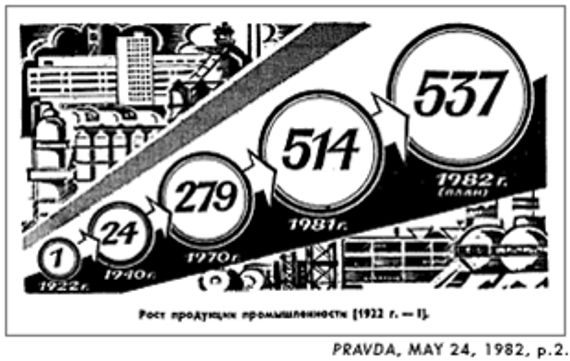 But rigor does not only mean accuracy, it means respect for the data in a broader sense. Letting them speak beyond the ornamentation, avoiding the “ducks” referred to by Edward R. Tufte.  Guiding our eye so the reader can discover them one step at a time. This brings us to the second quality:

The beauty of the data sometimes lies in their implications and their connections. This is why a good  infographic should be understandable at first sight, but also, when viewed for a second time, enable the reader to take pleasure in the data. Perhaps in the process of reasoning, both analytical and visual, that a graphic requires, we may come to a conclusion we hadn’t imagined. This is why a good infographic should have layers of information. Any infographic by Francesco Franchi is a wonder of visual richness and provides hours of entertainment and learning.

Storytelling in today’s parlance. When time, space and even meteorology are combined skillfully to tell a story through the data.

Interpreting this famous 1869 flow chart depicting Napoleon’s march to and from Russia, one can feel the cold of the steppe and even the frustration of the little great man.

These three examples are quite old. You might say that we have gone beyond the bar chart. Several centuries ago. Or not?

Data representation has its own conventions. Thus, hierarchy is best expressed through trees, space-time data through flow charts and the occurrence of a phenomenon through a distribution map.

In the age of information, never before had we had so many data immediately available. While we tame Big Data, some mobile apps already make them more manageable.

Thus, mass collection of data through the various geolocated mobile devices provides hitherto unheard-of space-time data. There are many examples today of tweets related to events (soccer, demonstrations) that combine immediacy with space, but to continue with our historical examples, I am including this 2010 map. Four years ago, Foursquare published this map that illustrated the records in their application related to travel, visually displaying the travel trends in the U.S. on Thanksgiving Day.

Also as a consequence of new technologies, the adaptation of new graphic standards that work on all devices opens up new opportunities for movement and interaction that particularly benefit the world of visual information. If you’ve ever been stuck in a traffic jam, have you ever wondered about the constant stop-and-go? This interactive infographic solves the mystery of traffic flows in an experiential way through a braking button.

Mexico Hosts the Launch of the OpenMind book "Ch@nge"